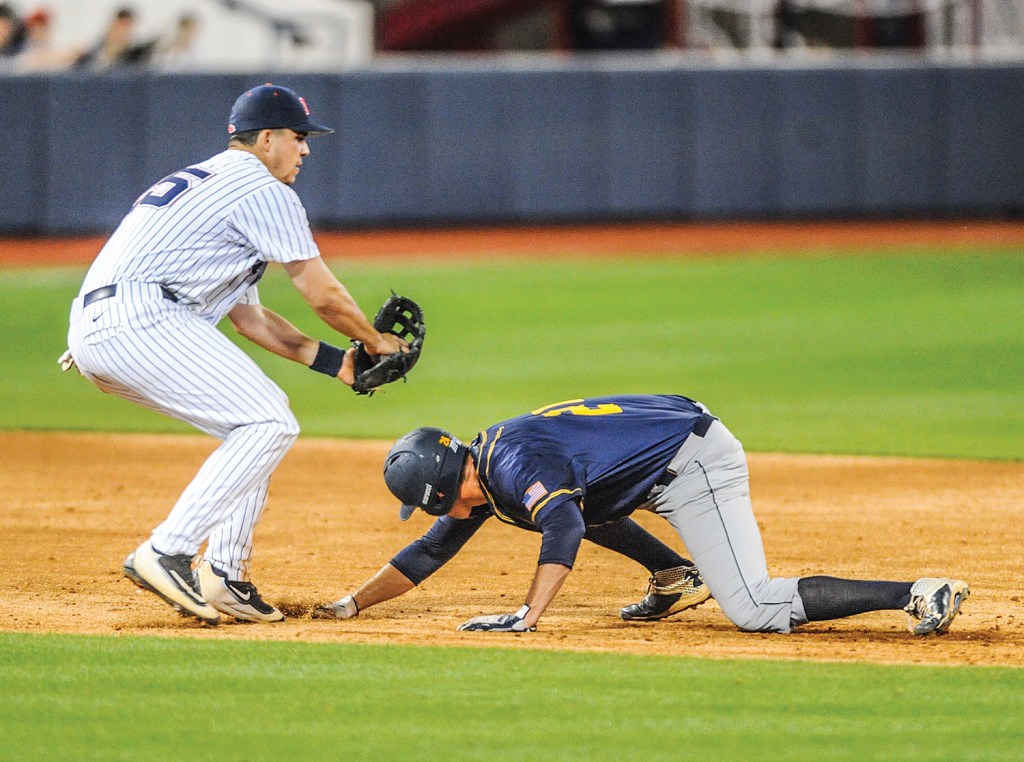 After blanking Memphis the night before, Ole Miss kept Murray State in check with an 8-3 win on Wednesday night at Oxford-University Stadium.

With the midweek sweep, the Rebels (28-10) improved to 21-2 in their non-conference schedule.

Chad Smith took the mound as a starter for the first time since his short 1 1/3 inning outing at Mississippi State on April 2. Smith worked five innings of shutout baseball, giving up only two hits and striking out a new career-high nine Murray State batters.

Following a night with three home runs, the offense continued to be hot for Ole Miss. The Rebels plated eight runs on 11 hits against 10 Murray State pitchers in eight innings.

The scoring got started in the second inning with Ole Miss putting two runs on the board with a sacrifice-fly by designated hitter Michael Fitzsimmons to score Colby Bortles followed by an RBI single by left fielder Cameron Dishon to score Will Golsan.

The Rebels would go on to score in the next three innings with a run in the third, two runs in the fourth and three runs in the fifth.

Fitzsimmons would reach on an error by Murray State shortstop Jaron Robinson, allowing second baseman Tate Blackman to score in the third inning. An RBI single from right fielder Ryan Olenek and an RBI groundout from center fielder J.B. Woodman scored the two runs in the fourth. Dishon and shortstop Errol Robinson had RBI singles and another throwing error from Murray State were responsible for the three runs in the fifth. Ole Miss went 5-for-16 with runners in scoring position but could have done even more damage as the Rebels left 11 runners on base.

Robinson finished 2-for-5 with an RBI while catcher Nick Fortes went 2-for-4. Fitzsimmons was 1-for-4 with an RBI.

It was a night of pitching by committee for Murray State (17-21) as no pitcher lasted longer than one inning.

The Racers managed to get on the board late with three runs in the eighth inning. A double by second baseman Caleb Hicks plated two runs while starting pitcher Jack Hranec with an RBI single. The three runs were credited to Brian Browning, who worked two-thirds of an inning, giving up two hits and walking a batter.

Connor Green relieved Smith and worked two innings of shutout baseball and did not allow a hit. Like Smith, he set a new career-high in strikeouts with five, passing his former best of four.