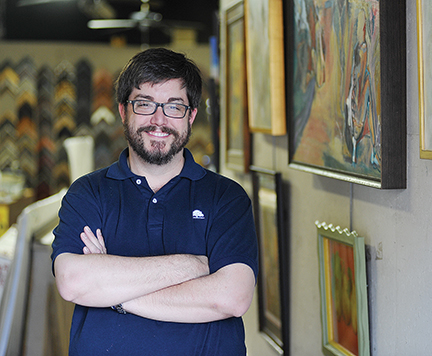 Bruce Newman Tommy Cribbs is the owner of the Frame-Up-Basement Gallery on the Square and is known for donating art and frames to local nonprofit organizations.

Tommy Cribbs would not think of himself as an Everyday Hero, according to Yoknapatawpha Arts Council Executive Director Wayne Andrews. What Andrews said may just be true, just ask Cribbs himself.

“I think it’s ridiculous,” Cribbs said of his nomination. “I get up and I come to work and I do my job. I don’t find it heroic in the least.”

Cribbs owns The Frame Up-Basement Gallery on the eastern side of the Oxford Square. He was hired to work at the shop in college, where he created frames for paintings, photographs and the like. Two years ago, he got the opportunity to purchase the store from Wanda Reid and took her up on it.

Since then, Cribbs has donated frames and artwork to the Oxford-Lafayette Humane Society, where Reid serves on the board of directors. The humane society auctions the frames off. He also frames artwork from the Boys & Girls Club, which is then auctioned off, and has a genuine passion for helping children in the community, according to Andrews, who nominated Cribbs for the honor.

“He does it quietly, you see him doing little things and you know it’s part of his personality that he likes things related to kids and education and helping them,” Andrews said.

Cribbs also shares admiration for Andrews, who he labeled as an important part of the community’s art landscape.

“(Wayne) is a tremendous promoter of the arts and anything to do with the arts,” Cribbs said. “Anytime I need something like advertising, the arts council is always happy to list my shows and put me on a poster.”

Andrews respects Cribbs for not only his work in the community, but also for continuing his business in historic downtown Oxford. At a time when rent prices on The Square are growing, Andrews admires Cribbs for staying downtown while he continues to help the community in which he lives.

“He’s a small business owner on the Square that has done the art crawl in the past, works with other artists to give them shows, helped us with some artwork and even did the Boys & Girls Club for their charity artwork,” Andrews continued. “He uses his talent to help other groups in town. He’s been an active participant in things.