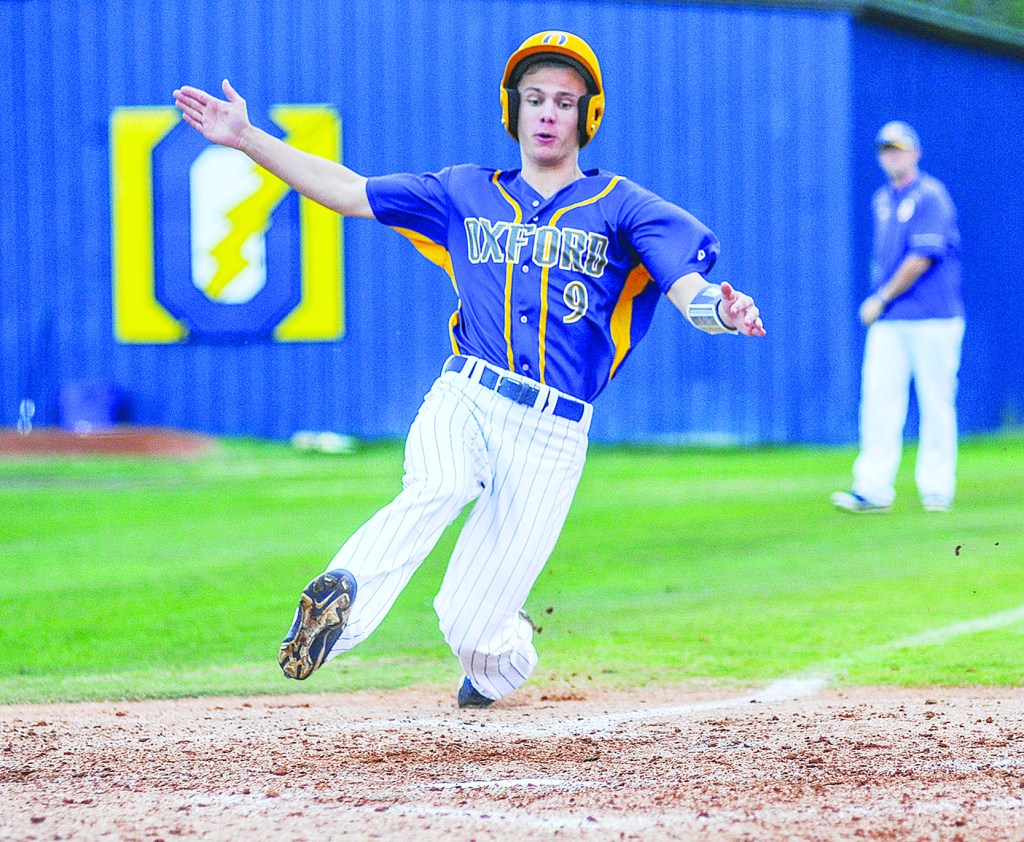 Oxford’s Giles Lamar (9) scores against Madison Central in the sixth inning of Thursday’s game at Edwin Moak Field. Lamar accounted for the Chargers’ only run as Oxford ended the regular season with a 2-1 loss.

With both teams having the weekend off and not beginning postseason play until next weekend, the Oxford and Madison Central baseball teams squeezed one last game in as a tune-up.

It felt more like a playoff game than it did anything else as Madison Central came away with a 2-1 win over the Chargers on Thursday at Edwin Moak Field to close out their regular seasons.

There was very little offense to be had in the early going as both starters were dominant on the mound. Carson Stinnett got the start for the Chargers (20-7) while Justin Milam toed the rubber for the Jaguars (19-8).

It was Stinnett who blinked first, giving up a two-run home run to Jaguar designated hitter Khristian Washington, who sent it over the left field wall for the 2-0 lead in the fifth inning. The two runs were the only  ones allowed by Stinnett, who went five innings and gave up three hits while striking out two Madison Central batters.

“(Madison Central) is a group who is averaging 13 hits in the last five or six games, and he threw lights out like he has all year,” Oxford coach Chris Baughman said of Stinnett’s outing. “He’s got two losses on the year because we can’t get it done at the plate.”

The offensive issues continued for Oxford as Milam held the Chargers to just the one run, which came off an RBI sacrifice fly by third baseman Jason Barber in the sixth inning, off three hits in 5 2/3 innings of work. Milam also struck out five Charger batters and issued three walks.

“Justin’s a competitor,” Madison Central, and former Lafayette, coach Patrick Robey said. “He’s not a velocity guy, but he throws a lot of strikes, works fast and keeps the defense in the game. He reminds me a lot of (former Lafayette player) Eli Murphree.”

The Chargers had a runner at second twice in the first two innings but were unable to bring them home. They left six runners on base for the game.