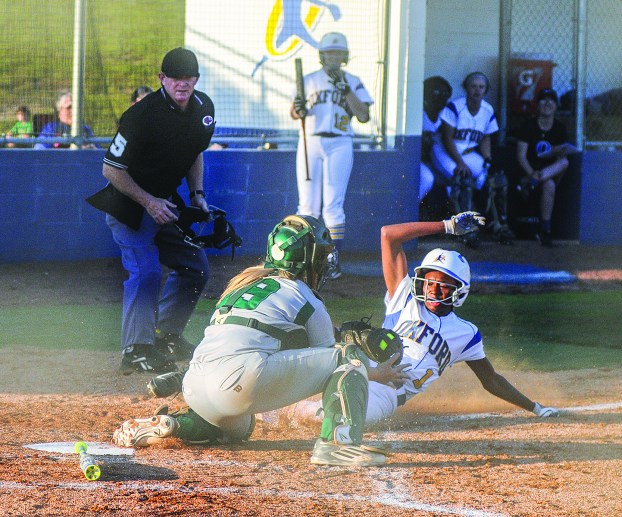 Oxford’s Kaytlon Pegues, right, is tagged out at home by Vicksburg catcher Shelby Muirhead during Game 1 of the teams’ MHSAA Class 5A first-round playoff series at the OHS softball field on the Oxford Middle School campus Friday. The Chargers dropped the opening game 13-9. (Jake Thompson)

A mistake-filled night defensively by the Oxford softball team was nearly overcome by a late rally at the plate. It was not to be though as the Chargers fell, 13-9, to Vicksburg in Game 1 of their MHSAA Class 5A first-round playoff series Friday night at the OHS softball field on the Oxford Middle School campus.

The series traveled south to Vicksburg on Saturday for Games 2 and, if necessary, 3. The games were not completed by press time.

Oxford (3-13) outscored the Gators 5-1 in the final three innings but committed six errors on the night, causing the deficit to be too large.

Amber Pettis took the circle for Oxford and took the loss in her outing. Pettis worked four innings, allowing 12 runs — eight of them earned — on 12 hits while striking out two and issuing zero free passes.

Vicksburg jumped on Pettis quickly with two runs in the first inning, five in the second, three in the third and two more runs in the fourth inning for a 12-4 lead.

A lot of the Gators’ damage was done by Oxford’s defense that recorded four of the six errors in the first four frames to keep innings alive for Vicksburg.

“The reason (Pettis) struggled the first four innings was because we weren’t playing any defense behind her,” Blackmon said. “The hardest thing is for a pitcher to concentrate and keep doing their job as things are falling around behind them. … This is one of our worst defensive games we’ve played in a while. We came out here and played so well against West Point on Wednesday and then we kind of said, ‘Where was that team tonight?’”

Quick response
The early 2-0 deficit after the top of the first was immediately cut in half by Oxford off a solo home run from shortstop Madison Crosby in the home half of the first.

The Chargers responded again after Vicksburg’s five-spot with a three-run home half of the second. Kaytlon Pegues was responsible for two with a two-RBI double.

Oxford would not score again until plating one run in the fifth then four more in the sixth for the final margin.

Crosby was 1-for-1 with the RBI, three walks and scored three runs. Right fielder Kelsey Wilborn went 2-for-4 and scored two runs.

Pettis was relieved by Crosby, who came in to pitch the final three innings and held Vicksburg to just one run on one hit. She struck out four Gator batters.

“We kind of had to,” Blackmon said of bringing in Crosby to pitch. “Because (Vicksburg) was getting so many dinky little flares. They found every little spot on the field and it was well, ‘She’s not doing a bad job,’ but we got to give them something different to look at. Madison’s ball moves a little better than Amber’s, so I think that helped us those three innings.”

With both teams having the weekend off and not beginning postseason play until next weekend, the Oxford and Madison Central... read more