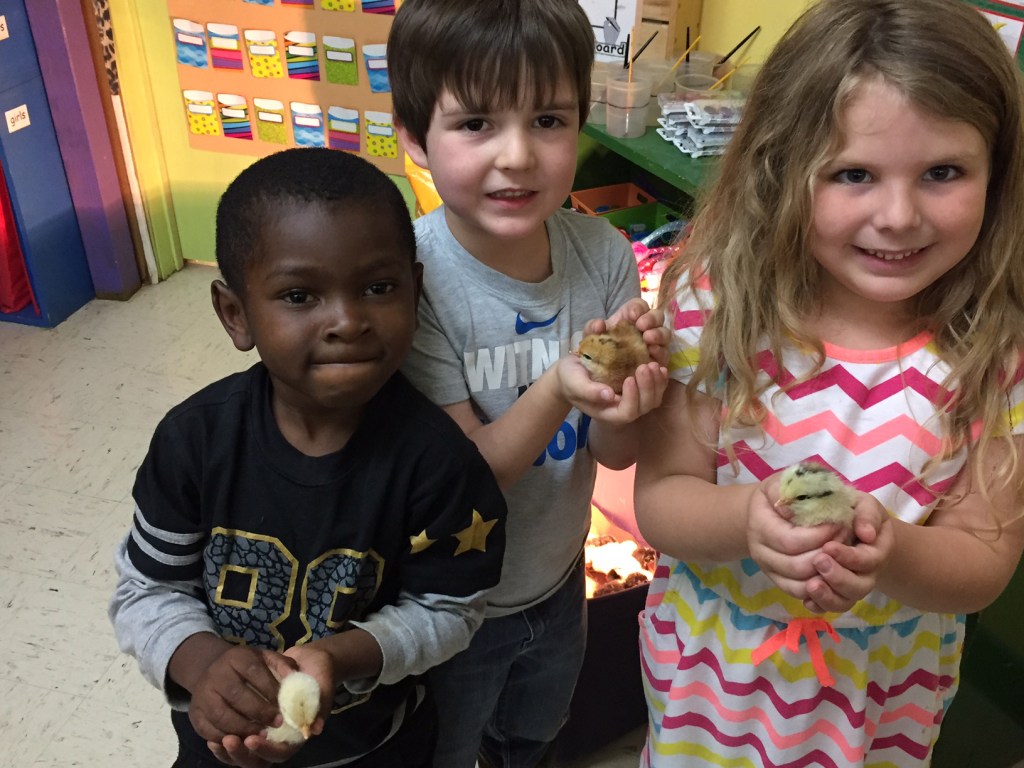 The hallways of the kindergarden ward of Lafayette Elementary School continually echo with the sounds of frolicking youngsters. Lately, that sound has grown, only this time it isn’t just noise from the young children cascading through the halls. Other young creatures have entered the fold: baby chicks.

As part of a spring project, 10 LES kindergarden classrooms are incubating chicken eggs. Some classes’ eggs have hatched while others are bursting at the seams with due dates any day now. The program is in its eighth year and relies on eggs being donated from families of students as well as incubators provided by funding from the PTO.

“Little by little we’ve had more teachers added in and say ‘this is fun,’” said teacher Page McNair. “A few days after we get the eggs, we use our flashlights and candle the eggs. Kids get to come up and turn the lights out in the room and look at the different veins, spots and eyeballs.”

Eggs typically take 21 days to incubate and hatch, a busy time not just for the chicks, but for the students as well. During that time, they watch YouTube videos on the process, inspect the eggs and write about their experiences. Fellow teacher Lauren Patton said all the reading and videos are nice, but it’s the real experience that opens eyes.

“I just like to see how they understand life,” she said. “We talk about the life cycles of plants, butterflies and frogs and it’s nice for them to see how it truly happens. A lot of these kids are not going to get the opportunity to see this at home, so it’s neat for them to get to see it at school and learn here.”

Students routinely huddle around the makeshift baby chick habitat in the classroom, each infatuated with the infant fowl. Jamal Malone, a student in McNair’s class, described the chicks as “cute, but their hair was all over the place.” Malone’s classmate, Caden Smith, said he’s learned a lot about chickens such as their ability to fly and how fast they can run.

As of Thursday, Patton’s chickens had yet to hatch as the anticipation was bubbling over. The eggs were provided by student Abby Kate Still’s family, and the kindergartener said she has enjoyed the process of following the egg’s progressions.

“We’ve seen some chickens inside and candled it,” she said. “It was like the egg moving around in there and when we looked, it looked like a beak or an eye.”

Each year, the classes must bid farewell to the chickens as they become a little more difficult to handle once their wings begin to develop. Children get the first opportunity to take chicks home — with permission from their parents, of course — but after that, it is “never, ever a problem” finding homes for the chickens, according to McNair. For now, the children are still enjoying the fluffy friends in the warm, cardboard box.

“Oh they love it,” Patton said. “Every day they come in and they’re super excited to check in on the chicken before they sit down to do their work. They’re wanting to be little mommas and daddies so they love it.”