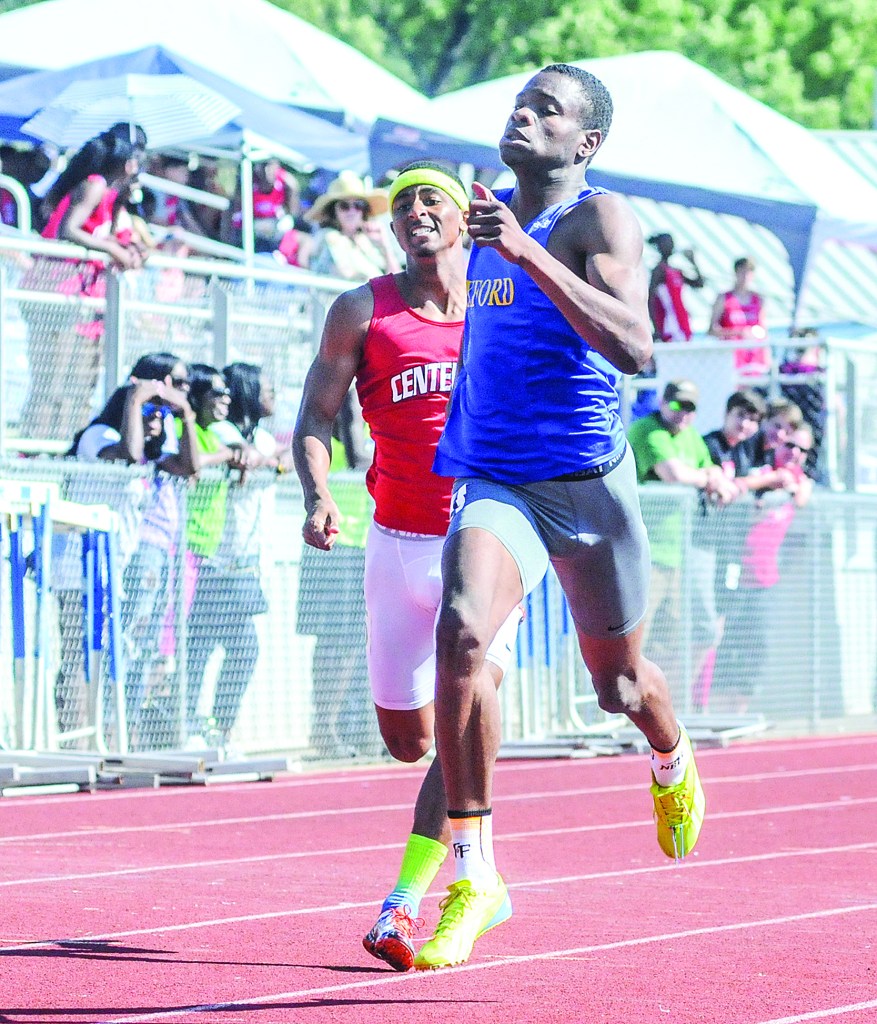 Oxford’s James Burnett runs ahead of Center Hill’s Alvin Westbrook in the 400 meters Saturday during the MHSAA Region 1-5A track meet at Bobby Holcomb Field. Burnett set a school record with a winning time of 48.18 seconds as the Chargers swept the region championships. (Davis Potter)

Oxford’s track teams continued to run away from the competition over the weekend.

After winning their respective division meets by more than 200 combined points, the Chargers’ boys and girls cruised to the Region 1-5A titles on Saturday at Bobby Holcomb Field. The boys’ team (240 points) leaned on 13 first-place finishes to top runner-up Center Hill by 86 points while the girls (235) finished 65 points ahead of Center Hill with the help of 14 event titles.

More importantly for the Chargers, they qualified 43 participants for the upcoming Class 5A North Half championships, the final meets before the MHSAA state championships early next month.

“We showed a lot of promise across the board, which is good heading into the North Half,” Oxford coach Chris Bush said. “North Half is going to be a big meet. The dogs come out in North Half, and you have to be on your A game. I feel like we’re doing what we need to. At this point, the money is in the bank. We’re honing, we’re sharpening and getting ready.”

The boys, which had more than half of those North Half qualifiers, got a pair of first-place finishes from Jaquan Webb and D.K. Metcalf. Webb won the 100 meters with a time of 10.72 seconds while leading the pack in the 200 meters with a time 21.62. Metcalf ran 15.11 to win the 110-meter hurdles and took the triple jump title with a distance of 43 feet, 10.75 inches.

“He had good competition there,” Bush said of Burnett’s run. “Center Hill was able to push him today, and we’ve been waiting on that. Two years ago when he started running, I told everybody that if anybody’s going to break my record, it’s going to be James Burnett. It was very good to see him reach that goal today.”

Charli Kendricks took the pole vault title, clearing the bar at 9-6. Bryanda Cannon won the long jump with a distance of 16-11.5 while Shamequa Vaughn recorded a distance of 33-3 to win the shot put. Oxford’s girls also won all four relays with the Chargers holding off Center Hill by less than two seconds in the 4×100.

The girls’ team will have 21 participants in the North Half meet, including freshman Katelyn Rock, who qualified in the 800 meters with a personal record of 2:37.31.

“Right now, it’s all about getting that top-4 spot and qualifying because the more numbers we get into the state meet, the more points we can get,” Oxford girls coach Chris Patton said. “We’ve got one more important week, and it is going to be tough.”

The North Half championship meets will be held Saturday at Bobby Holcomb Field.