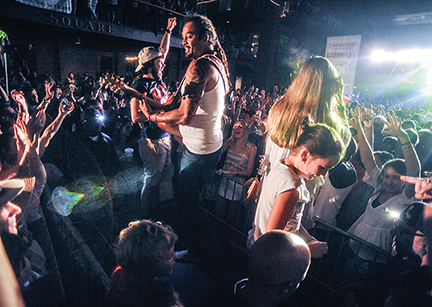 Michael Franti plays guitar on a small platform set in the middle of the crowd, during the Double Decker Arts Festival in Oxford, Miss. on Saturday, April 22, 2016.

With a high of 79 degrees under sunny skies, organizers say the event was the biggest ever.

“It was a great weekend and the weather could not have worked out any better to bring out what we think was a record-breaking crowd,” said Lee Ann Stubbs, Double Decker coordinator with Visit Oxford. “The crowds started early and stayed late.”

“The food was great and the music kept the crowds on their feet all day and night,” she said.

While the crowded downtown Square kept Oxford police officers on their feet as well, Oxford Police Chief Joey East said there were no major issues associated with the event.

“Double Decker went very well with few arrests,” he said. “It was a great festival with very few issues.”

The day kicked off with the annual Double Decker Spring 10K, 5K and Family Fun run which also saw a record number of runners in all three races with 1,555 people registered for 5K and 10K.

Art and food vendors were open by 10 a.m. to greet the crowds around the Square. On the south side of the Lafayette County Courthouse, contestants for the Best Dressed Pet contest gathered, showing off their duds.

Eight dogs and one ferret joined in the competition. However, it would be August Fields and her 4-year-old Australian shepherd, “Daisy,” who took home the grand prize. August dressed up as well with her and Daisy following a Star Wars theme. August was dressed as Princess Leia and Daisy was an Imperial Walker.

August, 7, said this was her third time to enter the contest, and while she and Daisy had won in some categories in previous years, this was the first time for them to win the grand prize.

“I’m a really big Star Wars fan,” she said after the contest. “We bought our costumes online. We had to make some adjustments for Daisy. We like to dress up and we also like to win.”

First runner-up was Molly Beth Shaffer and BéBé, a 13-year-old Chihuahua as a nurse and second runner-up was Belle Rolfe and Nina Resmini with two shelties, Sheldon and Annie dressed as Hermione and Harry Potter.

Down on South Lamar, the smaller of the Double Decker attendees had their own area in the parking lot of the Lafayette County Chancery Building. Visit Oxford contracted with Extreme Entertainment that provided several “rides” and activities, like a rock-climbing wall, a bungee jumper and a gyrosphere.

Lines to the amusement rides were up to two hours long in some cases. One mother said she spent $50 and could only use $24 since her three kids waited for two hours to get a turn on the bungee jumper. Another said while she liked the new rides, she wished there were more for younger children to do.

Stubbs said the Children’s Square Fair was kept open an hour longer than planned to accommodate those who had been waiting in line.

“It was a learning experience for us but we had more positive reviews from parents saying there were more things for older children this year and they loved it,” she said. “We will revisit the kids’ area for next year and work out some of the kinks, but all-in-all, I think it was a successful Square Fair.”

Ricky Pulley and his daughter, Rickaylah, 9, said they enjoyed the Square Fair, especially the popular bungee jumper, which was Rickaylah’s favorite activity.

“It’s a blessed day and we are having a great time,” Pulley said.

After a temporary lull in the late afternoon — when much of the crowd goes to eat some dinner and get ready for the evening music — it wasn’t too long before North Lamar Boulevard was packed with people once again with folks waiting for the evening’s line up that included bands, Orgone and Lettuce who performed before headliner Michael Franti & Spearhead took the stage at 8:30 p.m.