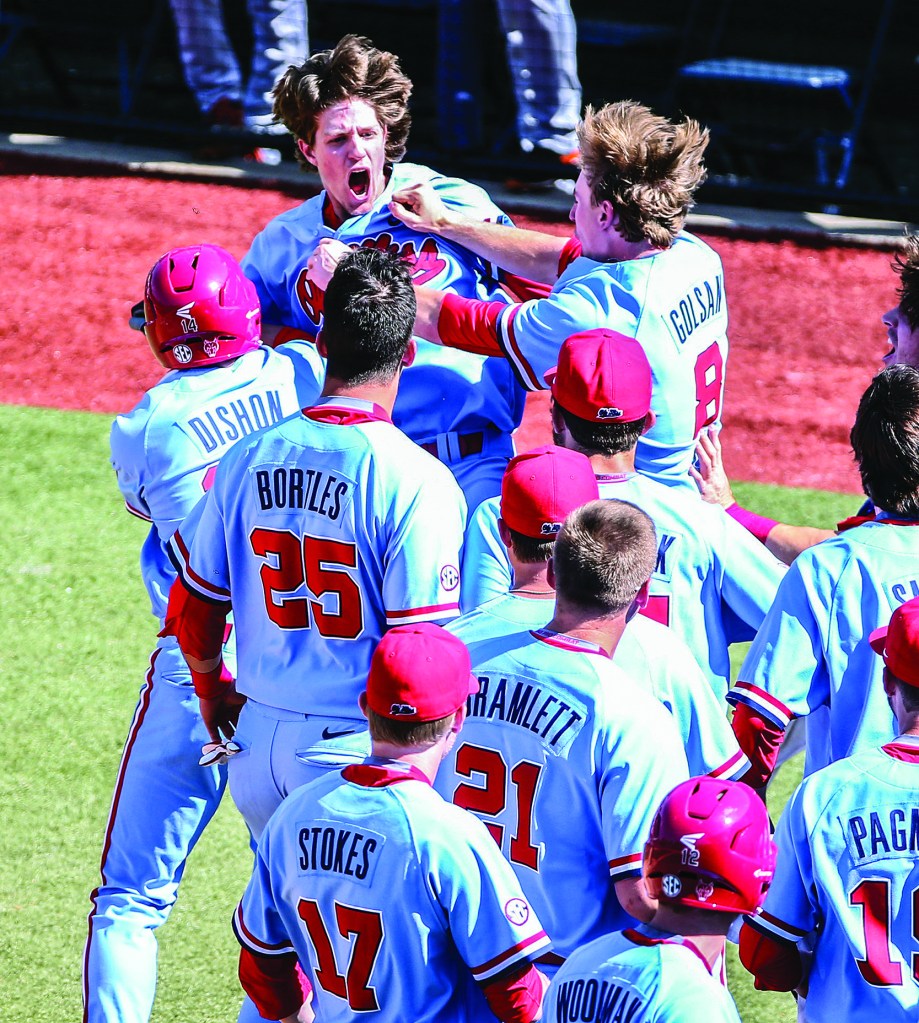 Auburn was up 5-0 heading into the eighth inning, and the Tigers learned the hard way that you must to play all nine. Ole Miss completed its second Southeastern Conference sweep of the season with a 6-5 win over the Tigers thanks to walk-off single from Henri Lartigue on Sunday at Oxford-University Stadium.

Johnson got through the first inning with eight pitches but was not able to fool anyone in the second frame, giving up four runs on four hits and giving the Tigers (18-22, 5-13) the early 4-0 lead.

“I could tell warming up he really didn’t have his stuff today, especially the fastball command,” Ole Miss coach Mike Bianco said. “So the first inning we threw a lot of curveballs because it was the one he could get in the strike zone. … He ran through the first, but obviously that’s not enough for a good team like Auburn to rely on one pitch and that’s ultimately what got him.”

Regular midweek starter James McArthur made his second weekend appearance, first in an SEC game, in relief of Johnson and worked 4 2/3 innings of scoreless baseball. McArthur allowed only two hits while striking out four and issuing one walk. The work out of the bullpen could add another name in the hat of possible Sunday starters if Johnson continues to struggle or loses his spot all together in the rotation.

“That will get lost in all of this and really might be the biggest factor of why we won,” Bianco said. “Put up a four-spot in the second and he comes in and gives us an opportunity. Of course, we don’t really take advantage of the zeros on the board and we don’t take advantage of their errors. I think a lot will be said of the last two innings, but certainly we’re not in a position if we don’t pitch like we did those last seven-plus innings.”

The first two days of the series were kind to the Ole Miss offense, scoring 13 runs on 23 hits on Friday and Saturday combined. Sunday was a different story as Auburn starter Casey Mize held the Rebels scoreless on four hits in seven-plus innings of work.

The same can not be said for the Auburn bullpen. Ben Braymer came in to relieve Mize in the eighth and gave up a two-run home run to Colby Bortles to put the Rebels on the board. Braymer stayed in for the ninth but allowed pinch-hitter Cameron Dishon and shortstop Errol Robinson to reach with no outs.

Gabe Klobosits came in to face Ryan Olenek. The freshman outfielder had an 0-for-4 day up to that point but made his first hit of the game a big one with a three-run home run to tie it up 5-5.

“My previous at-bats throughout the game weren’t exactly great,” Olenek said. “So coach B(ianco) walked up to me and said, ‘I don’t know what’s going to happen, but be ready for this next pitch and put a good swing on it.’ I knew (Klobosits) was predominantly a fastball thrower, so I knew he was going to try and overpower me. So first pitch, I was ready for it.”

Lartigue continued his hot weekend, going 4-for-5 at the plate. With Tate Blackman on second and still no outs, Lartigue hit a single into center field to score Blackman and win the game. Lartigue and Bortles were the only two Rebels with a multi-hit day.

“That score is not near as intimidating,” Lartigue said of Bortles’ home run to cut the deficit to three runs. “Three is a save opportunity and people blow saves all the time.”

Ole Miss travels to Pearl on Tuesday to take on No. 7 Mississippi State in the annual Governor’s Cup at Trustmark Park at 6 p.m.