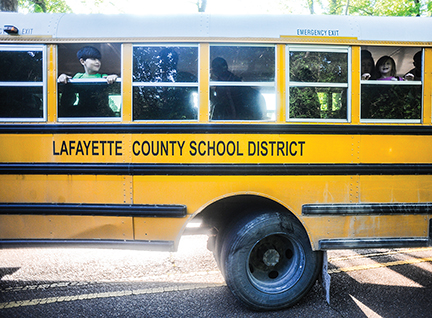 bruce newman Students look out the windows of their bus following a wreck involving Lafayette County School District’s bus No. 26 and a Saturn at the intersection of Highway 334 and County Road 418 on Tuesday.

A Lafayette County school bus was involved in a wreck Tuesday morning on Highway 334 that left a couple students with some bumps and bruises.

According to Lafayette County School Superintendent Adam Pugh, the bus was making its last pick up of the morning when a car allegedly ran the stop sign at the intersection of Highway 334 and Fudgetown Road.

The car hit the bus near the rear wheels, causing damage to the axle. The bus was towed to a shop in Tupelo for assessment, but Pugh said he didn’t see any other damage to the bus other than the rear axle.

The students were assessed on scene for injuries and then put onto another bus and taken to the school campus where school nurses checked over each child again.

“One kindergarten student had a busted nose and his parents asked us to take him to the ER to be checked out,” Pugh said. “Another student bumped their head on the metal side of the bus and her father took her to the doctor to be checked out as well. Other than that, there was just some minor bumps and bruises. We are very grateful it wasn’t worse.”

Bus No. 26 carries students in all grades, from kindergarten through 12th grade.

Pugh said the woman driving the car was taken to the hospital via an ambulance but did not know of her condition.

The wreck is being investigated by the Mississippi Highway Patrol, which could not be reached for comment Tuesday.