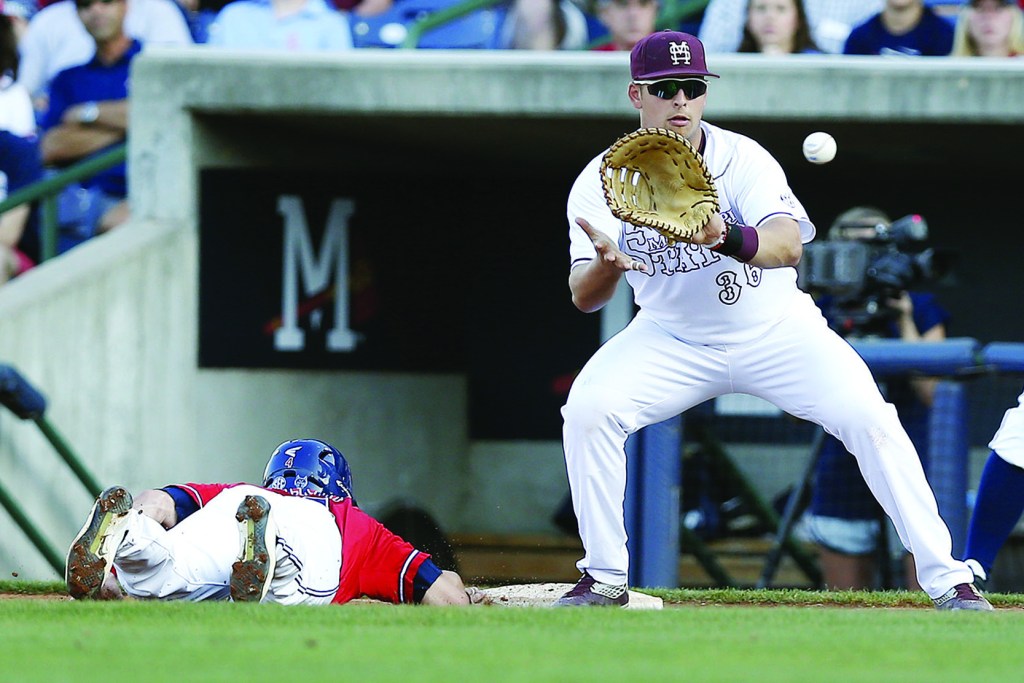 Ole Miss’ Tate Blackman dives back to first to avoid being picked off as Mississippi State first baseman Nathaniel Lowe reaches for the ball during the first inning of the Governor’s Cup at Trustmark Park in Pearl on Tuesday. The Rebels lost 2-0. (rogelio v. solis/ap)

Coming off a weekend sweep of Auburn and riding a five-game winning streak, the Ole Miss baseball team got its fourth shot at in-state rival Mississippi State, this time on neutral ground.

After claiming their series in Starkville earlier in the month, the No. 3 Bulldogs defeated No. 9 Ole Miss 2-0 on Tuesday night at Trustmark Park in Pearl. The win gave Mississippi State the annual Governor’s Cup trophy and three wins out of the four regular-season meetings between the clubs.

Chad Smith took the mound for his second straight midweek start for Ole Miss (31-11) and second start against the Bulldogs (28-13-1). Tuesday night’s outing went much smoother for Smith than his first encounter with Mississippi State at Dudy Noble Field. The junior, who picked up his fourth loss on the season, lasted only 1 1/3 innings and gave up four runs in Starkville but worked five-plus innings in Pearl. He allowed two runs on six hits while striking out three and issuing two walks.

Mississippi State scored the only runs of the game in the first and third innings. Left fielder Reid Humphreys hit an RBI single scoring center fielder Jake Mangum in the first while first baseman Nathaniel Lowe had an RBI single to plate catcher Jack Kruger in the home half of the third frame.

Right-hander Connor Green came out of the bullpen in relief of Smith and provided two key innings of work, including getting out of a bases-loaded jam in the seventh inning to keep the deficit at two runs.

The Rebels were on the heels of a weekend where they scored 19 runs against Auburn but had their offense silenced by Mississippi State. Bulldog starter Ryan Cyr worked four innings of shutout baseball and gave up only four hits to Ole Miss batters.

The chances were there all night for the Rebels to jump back in the game, but they stranded 11 runners on base and squandered opportunities, going 0-for-8 with runners in scoring position. The best chance to tie the game late came with shortstop Errol Robinson and right fielder Ryan Olenek in scoring position in the eighth inning, but second baseman Tate Blackman struck out looking to end the threat.

Catcher Henri Lartigue and center fielder J.B. Woodman were the only two Rebels with multi-hit games, both going 2-for-4.

Looking ahead
Both clubs will have quick turnarounds as they start their weekend series on Thursday. Mississippi State will travel to Alabama while Ole Miss returns home to host No. 8 LSU. The Rebels, Bulldogs and Tigers are all tied for second in the Southeastern Conference’s Western Division standings at 10-8, two games behind No. 2 Texas A&M heading into the weekend.