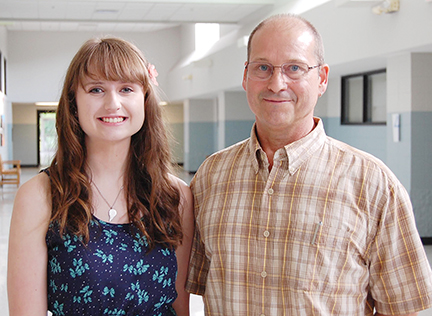 Kayla Owens has been aiming to be a STAR Student since early on in high school.

Owens, now a senior at Oxford High School, was recognized with the STAR Student honor Monday night at the Oxford School Board meeting.

Owens also will be honored during the STAR Student program at the annual Mississippi Economic Council’s education celebration Thursday in Jackson. The student-teacher achievement recognition program is sponsored by the M.B. Swayze Foundation.

“It is a great honor to be named as the one person from my school,” Owens said. “I have been aiming to receive STAR Student since sophomore year, making sure to keep my grades up, since I knew I had the prerequisite ACT score. It is just a really satisfying feeling to have finally gotten it.”

Owens, daughter of Daniel and Melissa Owens, is currently a member of the Anchor Club, captain of the Envirothon team, co-captain of Science Olympiad, concert mistress of the school orchestra, and a member of the Math and Science team. Earlier this year Owens also was a member of the LOU Symphony, but she had to stop that involvement due to her taking college classes.

She doesn’t shy away from the harder high school subjects and college courses.

“My favorite subject that I have taken in high school would have to be AP Physics, mainly because it was such a challenge for me, and it particularly interested me,” Owens said. “It was also because I had such an amazing teacher though (Mr. Jim Reidy, who I picked as my STAR Teacher.) He made everything come alive with the way he taught, and he always knew all these practical examples that made things we were learning seem applicable to actual life, not just a school setting.  I actually have him again for AP Chemistry this year, and it is much the same way.”

This is the 11th time Reidy has been chosen by a student as the school’s STAR Teacher. He’s already in the Hall of Fame, which he earned after being nominated 10 times. There are only 76 teachers in the state who have been inducted into the STAR Teacher Hall of Fame in Mississippi.

Reidy has been teaching for 26 years, is in his 23rd year at Oxford High School and teaches AP Chemistry and AP Physics.

He teaches what Owens plans to make her life: She heads to Caltech in the fall to major in physics.

“My goals there are just to do well academically and learn a lot, while hopefully doing some interesting research,” she said. “After that, my overall goal would be to work for NASA JPL designing rockets and spacecraft.”

As a winner of the STAR Student designation, Owens will receive a scholarship award in Jackson thanks to the Kelly Gene Cook Sr. Charitable Foundation. The highlight of the education celebration will be the naming of the Mississippi ALL-STAR Student for 2015-2016 school year, winner of the coveted $24,000 Cook Foundation scholarship and teacher awards.

Whether she wins the big scholarship or not, Owens has been an asset to OHS and will be missed after graduation.

“Kayla’s a star to us at Oxford High School for other reasons — she is active in many areas and an excellent student,” said OHS Principal Bradley Roberson.