UM student eats clean to be a pageant queen 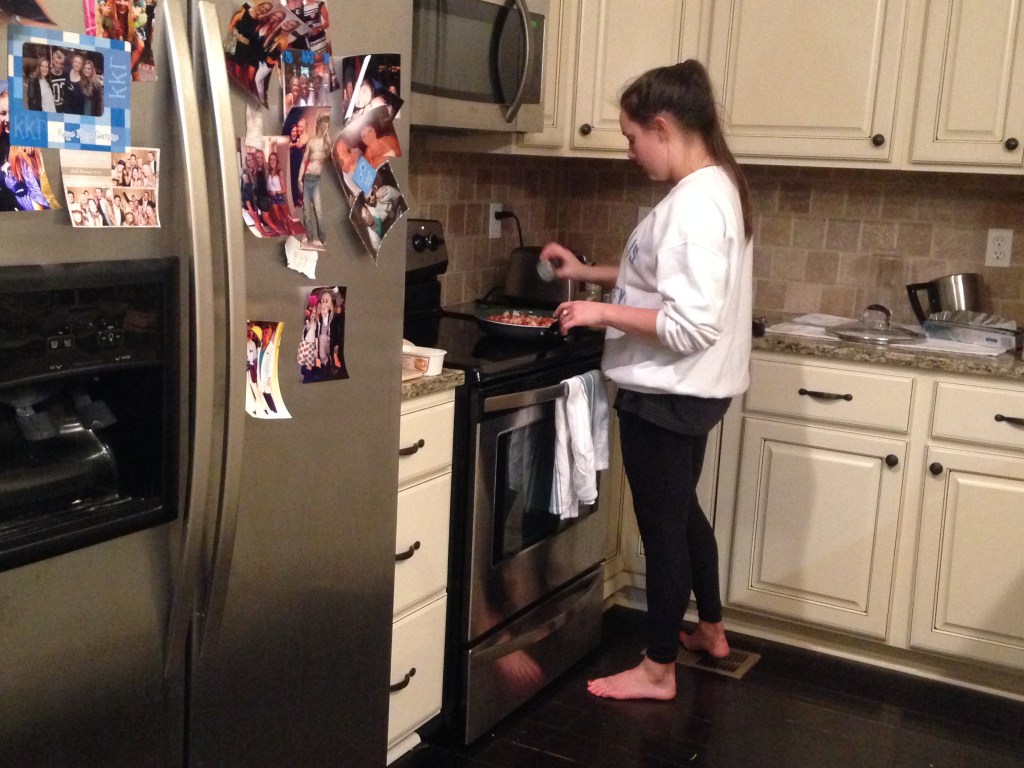 Benton Garrison, a senior at the University of Mississippi, cooks in her kitchen in Oxford, with an added emphasis on eating clean.

Second-semester seniors in college have a lot on their mind: passing classes, enjoying the last months with their friends, applying for and interviewing for jobs post-grad, and trying to remain calm as the real world rapidly approaches. With a never-ending list of things to do, it is often difficult to find the time to make healthy eating decisions and to cook.

This is not the case for El Dorado, Arkansas, native and University of Mississippi marketing major Benton Garrison, 21, full-time student and self-made chef extraordinaire.

Garrison lives off campus and has become quite the cook over the past several months. She has always considered herself to be a healthy eater, but frequent trips to the grocery store and planning and preparing every meal is somewhat new.

“I used to eat out a lot, get something on campus or eat at my sorority house,” Garrison said, “When I got nominated to be in Parade of Beauties pageant,” she added, “I began to eat really clean, cook for myself and make a lifestyle change.”

Garrison was nominated for the pageant by her friend Emily Ranger. “I nominated Benton because she had told me once before that she would love to have the opportunity to experience Parade of Beauties before she graduated,” Ranger said. “I nominated her during Chapter on a Monday evening at the Kappa Kappa Gamma house and she accepted.”

Immediately following the nomination, Garrison kicked her healthy eating into high gear. Not only was it difficult finding healthy options on campus or around town, but also cooking for herself saved a lot of money. Having the ability to plan out each meal and buy the ingredients she needs, forces her to stick to a budget and a plan.

“I knew that if I kept eating on campus,” she said, “I would fall into the mac and cheese and chicken nugget food plan.”

Garrison started her health kick with a weeklong cabbage cleanse. After that, she started thinking of creative ways to make dishes that tasted good and were good for you.

“Two of my favorite dishes that I made were a cauliflower crust pizza and whole wheat pancakes with a fruit topping,” she said. “It is all about balancing healthy and delicious,” she added.

Garrison also made a tasty spaghetti squash recipe which she has shared with her friends.

“I cut the squash in half and put olive oil, salt and pepper inside and cooked it for 40 minutes,” she said. “While it was cooking, I combined a can of diced tomatoes, half a diced onion, oregano, basil and garlic powder into a sauce pan and cooked it all down into a chunky, good sauce,” she added.

Garrison’s healthy eating has become more of a habit than a hobby and now is part of her routine.

“It all started with Parade of Beauties,” she said, “It is my senior year, and I thought I should try a new experience and something I had never done before.”

Garrison was challenged to step outside of her comfort zone and had no idea what to expect. Her mom is very knowledgeable about pageants and knows a lot about dress shopping.

“I fell in love with the first dress I tried on the second my mom zipped it up,” Garrison said. “I tried on a few afterward, but knew that this was the one.”

To prepare for the pageant, Garrison had to prepare a minute-long interview monologue to be judged by a panel the morning of the pageant. She discussed the recent fire at the Courtyard Marriott on Jackson Avenue, which she reported to the police after seeing smoke on the roof.

Garrison also had to practice walking in her 4-inch heels and her long dress and encountered several wardrobe mishaps the day of the event.

“I had to get the zipper on the dress replaced four times the day of the pageant,” she said. “It took me 2.5 hours to get my hair and makeup done, so I had to race to the Ford Center afterward, grab my shoes and dress and quickly get ready.”

Garrison said that a girl held the back of her dress and walked her over to her mom so that she could zip it up, because they were so worried it would break again.

Madison Barker, 19, Oxford native and makeup artist, did Garrison’s hair and makeup for the pageant.

“It is really easy to make someone glamorous when they are already beautiful,” Barker said.

Garrison described the moments leading up the pageant as “a lot of standing and waiting.” She said then when her nerves started to kick in, she had to remind herself that she was just doing this for fun.

When the pageant started, the girls walked on stage and lined up on bleachers. Garrison was on the top riser and was nervous she might trip on her dress walking up.

After the initial parade, the actual pageant began where the announcers call the girls names and they walk out solo.

“That part was really fun,” Garrison said, “I told my mom that I have never felt prettier or more confident, and that I finally understood why girls like to participate in pageants.”

Garrison said this was due to the unexplained feeling that one has while they are on stage. She felt completely relaxed, confident and beautiful.

After the pageant, Garrison was so excited to see her family and friends who came to support her and for the huge pizza she was going to eat after weeks of extreme clean eating.

“It meant so much to me that I had so much love and support from my family and close friends,” she said, “It is an experience I will never forget.”