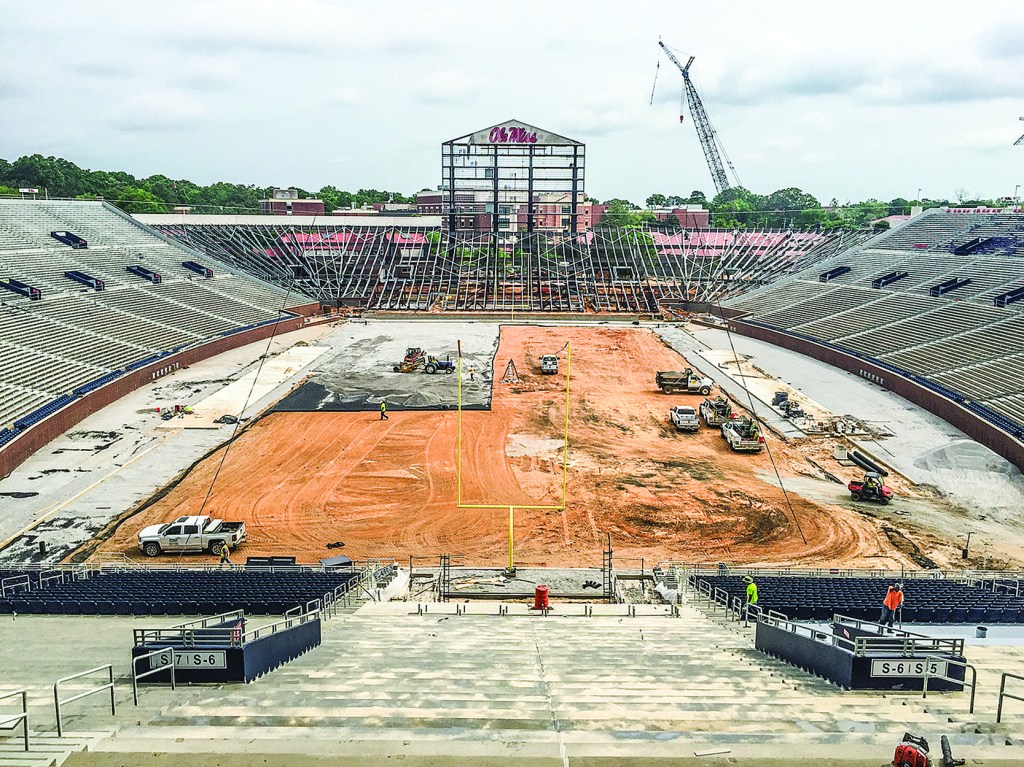 The North end zone at Vaught-Hemingway Stadium is currently on pace for its completion in time for the 2016 season. The expansion will increase capacity to 64,038. (Bruce Newman)

The final stage in a master plan to renovate and expand Ole Miss’ football stadium is on track with its original schedule.

Athletic director Ross Bjork said the expansion of the North end zone at Vaught-Hemingway Stadium is “on schedule and under budget” heading into the summer. The project, part of the school’s Forward Together Campaign, will be ready for the start of the 2016 season as was originally planned when Bjork announced the phases of renovation and expansion in December 2014.

The first phase, which added 30 luxury seats and 700 club-level seats to the South end zone, was completed before last season.

Work on the North end zone, which will bowl in the stadium, is scheduled to be completed in mid-August, giving Ole Miss a few weeks “to wrap things up, move some stuff in, move equipment in and those type of things” before the Rebels’ home opener against Wofford on Sept. 10, Bjork said.

The expansion will increase capacity to 64,038 and move the student section, which will go from 8,200 seats to more than 10,000, from the South to the North end zone. It will include 144 new restrooms and 24 additional points of sale for concessions.

“We’ll be pushing it right up to that first game just with little things to wrap it up,” Bjork said.

Construction crews began tearing down the seating the week after Ole Miss played its final home game against LSU on Nov. 21 and have started installing the framework for new seats. A new video board measuring 104 feet wide and 49 feet tall will also be added to the existing North end zone structure as part of the project.

Two new entrances to the north end of the stadium will also be available for fans with a plaza between the Pavilion and the stadium and an entry point from the new All-American Drive corridor, which will run from the street to the stadium.

Track on track
Repairs to Ole Miss’ track are also scheduled to be completed by the middle of July, Bjork said.

The track has been closed for nearly two years after bad soil leading to a cracked drainage pipe led to a sinkhole effect underneath the track’s surface. Dirt filled in around a drainage pipe running underneath the surface eventually failed, causing the pipe to crack after a mixture of dirt and water moved away from the surface.

The entire infield as well as most of the track’s perimeter are being replaced while a new pipe and new soil will also be installed. The repairs will cost approximately $8 million.

“They’re laying rock right now and about to lay some asphalt and then they’ll starting laying the surface here pretty soon,” Bjork said. “That’s on track.”