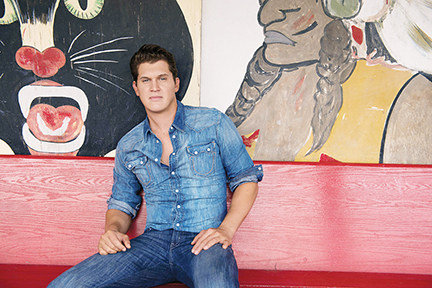 “All I ever wanted to do coming to Nashville was to write rowdy, in-your-face, straight country music,” said Jon Pardi, “and that’s what this album is.”

Pardi’s tour to promote his sophomore  album, “California Sunrise,” comes to the Lyric in Oxford tonight. Doors open at 8 p.m. with Pardi taking the stage at 9 p.m.

Pardi’s high-energy approach, perfected on stages throughout his native California, is applied to music rooted in songwriting legend Harlan Howard’s adage that country is three chords and the truth.

“If you can take a piece of life and put it in a song,” Pardi said, “it’s going to be a good song — especially if it’s from the heart.”

Few artists hit stride as quickly and as forcefully as he has, and his fellow artists have been among the first to take note.

“People ask me who I’d like to open up for,” he said with a smile, “but I’ve been lucky enough to have opened for several artists I look up to.”

It’s a list that includes Alan Jackson, Dwight Yoakam, Dierks Bentley, Gary Allan and Luke Bryan, artists who appreciate the kind of influences Pardi brings to the table — echoes of the crisp Bakersfield sound of Buck Owens and Merle Haggard, hints of the driving beat of Waylon Jennings and the excitement of Jerry Lee Lewis.

A natural storyteller, he writes what he knows, spinning tales born of his dues-paying days in the area around his native Dixon, California, and bringing it all together into a strong, cohesive musical statement.

It’s not hard to see where the earliest seeds of Pardi’s approach lie. His musical journey began with a grandmother who loved classic country and had a karaoke machine in the house. Young Jon developed a special fondness for Hank Jr. and the two Georges — Jones and Strait — along with Alabama, Dwight Yoakam and Mark Chesnutt.

At an even younger age, he walked out of a children’s music class and asked for guitar lessons so he could sing like his heroes. He was writing songs by 12 and playing them in a band at 14. A self-confessed “class clown,” he was more interested in writing songs and playing guitar than in either sports or homework. After high school, he and buddy Chase McGrew began playing acoustically in small bars around Dixon and Winters.

In 2008, the time was right to make the move to Nashville.

He took his dog, his PA system and the $7,000 he’d saved, which, he said, “I went through pretty quick.” He used a credit card to pay the fee for lifeguard training, using that skill to earn money until he landed a publishing deal, just 18 months after moving.

“I did a lot of co-writing,” he said. “There were a lot of headache mornings but I still showed up, and a lot of good songs came on days like that.”

As demos he wrote and sang started making the rounds on Music Row, label execs, including those at Capitol, began asking, “Who is this Jon Pardi?”

“We started doing showcases,” he said, “and about the third one we did with the full band, (Capitol Records Nashville President) Mike Dungan gave me a handshake afterward and said, ‘Let’s do it.’”

“I know I’m lucky to be doing what I’m doing,” he said. “I could be back working construction or installing air conditioners in an attic that’s at 115 degrees. There are a lot of people who work awfully hard to make a dollar. I’m glad the hard work I’m doing now goes into something I love this much. It makes me really happy to be here doing music.”