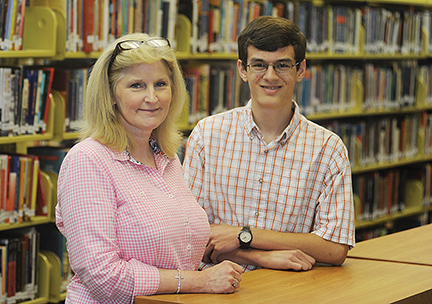 Daisy Bullard, left, is the STAR Teacher at Lafayette High and Sam Meals is the STAR Student.

Lafayette High School’s STAR Student loves math and science, and it’s what he plans on doing for the rest of his life, but it was an English teacher that made a difference for him during his high school experience.

Sam Meals, a senior at LHS, recently was awarded STAR Student and he named Daisy Bullard as his STAR Teacher.

Bullard, who has been teaching for 19 years, is excited about her first STAR nomination. She had Meals for two years in class, and said, “he’s an excellent student.”

“So many of our high-level students are focused on math and science when they are seniors, and it’s an honor he remembered me in English,” she said. “By the time they’re in the advanced classes, they sometimes forget the English, so I just never expected him to choose me.”

Meals earned STAR Student status for getting a 34 on his ACT, and he’s also involved in several activities at school, including band, archery, National Honor Society and Mu Alpha Theta.

“She (Bullard) prepped us for the ACT really well — that and the PSAT,” Meals said. “The way she taught it was fun. She is also the only teacher that really got me to like English, and it’s a very, very hard thing to do.”

Meals, the son of Keith and Elizabeth Meals, was not surprised to earn the STAR Student honor and is proud to take it with him to Mississippi State University in the fall.

“I plan on getting a degree in mechanical engineering and then becoming a weapons engineer,” he said. “I like guns and I’ve grown up around them and it sounded like something interesting. It lets me make money doing stuff that I like.”

Meals will be unable to attend tonight, but he is a part of hundreds of students that will be honored during the STAR Student program at the annual Mississippi Economic Council’s education celebration in Jackson. The student-teacher achievement recognition program is sponsored by the M.B. Swayze Foundation.