Oxford facility one of five being shut down 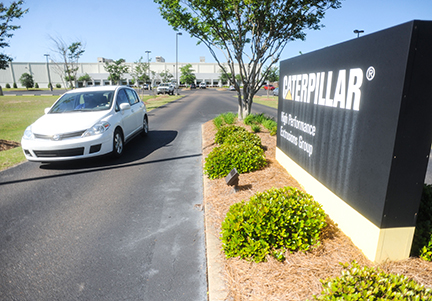 Caterpillar, Inc. announced that its plant, in Oxford, Miss. on Thursday, April 28, 2016, will be closed in 2017. The plant, which produces hose couplings, employs about 240 people. (AP Photo/Oxford Eagle, Bruce Newman)

Caterpillar announced Thursday it will be shutting down its Oxford plant within the next 18 months, leaving about 240 people without a job — many of them Oxford and Lafayette County residents.

The news shocked and dismayed city and county leaders.

Layoffs had been anticipated, according to Jon Maynard, president and CEO of the Oxford-Lafayette County Economic Development Foundation and Chamber of Commerce. But shutting down the facility was not expected.

“In economic development, you are always aware of what is going on globally when you have a global company work- ing in your area,” Maynard said. “We have seen reductions in the workforce at Caterpillar coming for a long time. We were not expecting an outright closure, so we were caught a little bit off guard by that. I wouldn’t say flat-footed, but it was something we hoped wouldn’t happen.”

In a company news release, Caterpillar said the Oxford plant joined four others around the nation that will be closed as a result of the company’s efforts “to take costs out of its business to align with lower demand.”

“These actions are resulting in sub- stantial cost reduction for the company in these tough market conditions,” reads a note sent to Caterpillar employees Thursday. “Caterpillar recognizes these restructuring actions are painful for its dedicated workforce, their families and the impacted communities. The decisions are difficult, however, it is necessary to have the right capacity in place for the tough market conditions the company is facing.”

Caterpillar opened in Lafayette County in 1997. In 2008, a large portion of the plant was destroyed by a tornado; however, it was rebuilt and expanded. But financial reports as early as 2009 showed the company was having problems. That year, Caterpillar cut 20,000 jobs throughout its corporation.

Of the 240 Caterpillar employees, approximately 100 live in Lafayette County, according to Maynard.

“Caterpillar is a regional employer so this closure is affecting more than just Lafayette County citizens. It’s affecting counties all around us,” Maynard said.

Maynard said the county is already in discussions with the Mississippi Development Authority and the Tennessee Valley Authority, as well as the real estate side of Caterpillar, to begin marketing the facility as soon as possible.

Maynard said the biggest impact from the closure is going to be in the county’s tax base.

“It’s the nature of the beast when you attract global companies to do business in your com- munity,” Maynard said. “But we are ready for it. We expect to be able to market this thing very soon and turn this into a positive. “The opportunities this presents are tremendous, and we expect to back fill the jobs just as quickly as possible. We restore the tax base, we restore the jobs and we restore the families.”

Lafayette County Board of Supervisors President Jeff Busby was also stunned by the sudden news.

“We’re obviously devastated over it. It’s devastating news to all of us,” Busby said. “You never like to lose jobs in the county. We know the impact this will have on the families of the employees in Lafayette County and we will work tirelessly to fill these jobs as soon as possible. It won’t happen overnight, but I assure you we will work diligently to back fill these jobs as soon as possible.”

The county renewed Caterpillar’s ad valorem exemption last year for five years. The county offers the tax exemption to industries as an incentive for them to come to Lafayette County, and that provides jobs and show growth. The company still paid school taxes.

Mayor Pat Patterson found out about the closure Thursday afternoon said he and the Board of Aldermen are “just sick about it.”

“It came as a total surprise,” he said. “We’re going to do all we can to find jobs for those affected. It just couldn’t be worse news.”

Caterpillar employs many residents, but the loss will be felt throughout the community in other ways. Employees have been involved in many community projects, supporting them financially and with volunteers. One such organization is the United Way of Oxford and Lafayette County, according to director Alice Ricks.

Caterpillar is one of the top companies that contributes to United Way.

“While it will obviously affect United Way’s fundraising, my thoughts are with those losing their jobs and their families,” Ricks said. “They’ve done so much for the community.”

Caterpillar helps support LOU Excel By Five and was the naming sponsor for this year’s Double Decker Arts Festival.