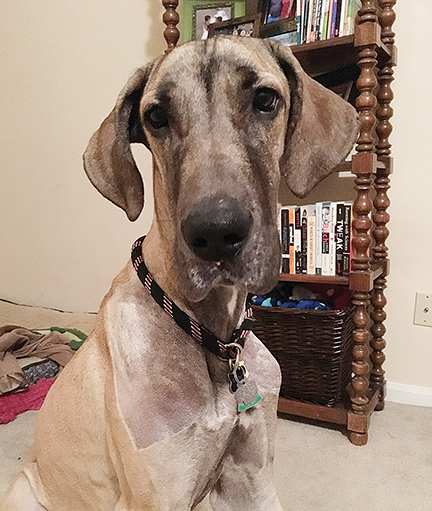 Amanda Bohl and her service dog Beatrice are never apart, and that includes during the day when Bohl is a teacher’s assistant at an Oxford school.

On April 7, the day started as any other day. The two were in the cafeteria, Beatrice in a down-stay position under the small table.

“When it was time for us to leave I stood up and walked around the long table and when I was halfway around the table I watched a woman take a broom and strike Beatrice with a jabbing-like motion directly into her right side,” Bohl told the EAGLE. “The blow was completely unprovoked.”

Bohl claims she took Beatrice out of the room and laid her down. Within moments, it was clear Beatrice was hurt.

“She was limping on her left arm and whining — something she has never done on the job unless she was alerting me of something,” Bohl said.

The two made the drive to Starkville, and it became obvious Beatrice was getting worse.

“Beatrice was uncomfortable, screamed every time we hit the slightest bump and there wasn’t anything I could do,” Bohl said. “When we finally got to State, Beatrice was taken in on a stretcher because we didn’t know what was wrong. There was speculation that this could be related to her arm or spinal damage.”

Beatrice had an MRI that showed moderate to severe inflammation and edema, or excess fluid, in the joint around the shoulder, according to Bohl.

“The doctor also noted that Beatrice was experiencing severe atrophy of the muscles on her left shoulder,” she said.

More tests revealed Beatrice had developed an infection in the joint.

“The lab at State is still growing the bacteria found in her joints to determine exactly what we are dealing with,” Bohl said. “In the meantime time, Beatrice has been started on antibiotics.”

“I’ve always done my best to stay away from her,” she said.

Bohl went to the Oxford Police Department to file a report of service animal abuse against the woman.

OPD Maj. Jeff McCutchen said the woman was given a citation for a misdemeanor charge of abuse to a service animal and was given a court date. He said no witnesses saw the woman strike the dog; however, some noticed the obvious injuries to Beatrice.

“No one saw the lady hit the dog with the broom, but some people said they noticed the dog was fine when she came into the cafeteria and then saw her walking out limping,” he said. “They said it was obvious something had hap- pened to the dog.”

Bohl started a GoFundMe website to help with mounting medical bills which are about $5,000. So far, she’s raised about $3,600.

Bohl said Beatrice is starting to feel a bit better but still receives acupuncture for her pain and is on antibiotics. She will stay on kennel rest and medications for about five or six weeks.

After she’s healed, she will start with physical ther- apy to rebuild lost muscle. However, Bohl said there’s more at risk than just Beatrice’s physical health.

“When something like this happens, there are mental repercussions for both the service dog and the handler,” Bohl said. “Beatrice has dedicated her life to loving and protecting my well-being and expected nothing but my loyalty in return. And now someone has physically and maliciously assaulted her, she’s confused and does not understand why a person would do this to her.”

Recovering Beatrice’s mental strength will be the most challenging part of her recovery. It will take extensive training to correct that distrust and fear.

“This is very different than obedience training and task training because dogs generally believe that people are good, most dogs do not require this sort of training,” she said. “Depending on the severity of the mental damage it may take a behavioral specialist trainer.”

Beatrice helps Bohl each day to make sure she remains safe. Bohl’s illness often causes dizzy spells and Beatrice helps to keep her stable and carry items on demand, which makes it less likely for Bohl to fall.

“There is a lack of education regarding service dogs, which just creates ignorance,” Bohl said. “I don’t have a service dog just because I want to take her everywhere. I have her because I need her to go about my daily activities. By telling others about this horrific incident it creates some awareness. I hope that this incident will spark others to educate themselves and others to create a safer community for those of us with service dogs and disabilities.”