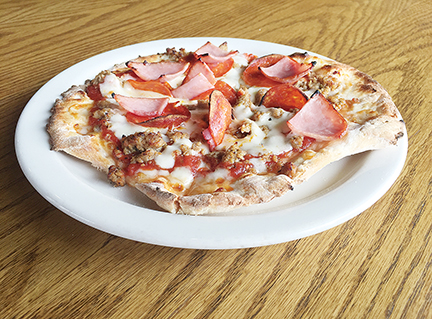 The pizzas at Soulshine on the Square in Oxford have unique ingredients and creative names.

Blues guitar riffs are softly playing over the speakers in the background. Cold beer flows from the taps, and the smell of an array of toppings fills the restaurant as they are baked on top of the stone oven that cranks out a new pizza every three minutes.

The quintessential college bar and eatery has become a staple on the Square, but Soulshine didn’t actually start locally. Founded in Jackson, the pizza restaurant began branching out and added another location in the Jackson area, as well as in Nashville.

A copper-topped bar runs the length of the restaurant, lined with beer taps and flat-screen televisions. Guitars and concert posters are strategically mounted on the walls throughout.

The staff wears tie-dyed T-shirts that represent a laid-back attitude, while maintaining a level of professionalism and speedy service.

“It’s a great working environment,” said Matt Russo, who began working at Soulshine Pizza Factory last summer. “It gets really hectic back here on (busy) nights, but we manage to keep our cool.”

By encompassing traditional Italian food, like meatballs, and blending it with local cuisine, such as crawfish, Soulshine Pizza Factory has created a menu that’s equally as unique as it is delicious.

Many pizzas are named after famous musicians like The Bob Marley, which features the island flavor with pulled chicken and jerk seasoning. Or, The CCR, a chicken pizza using a ranch base rather than marinara, an innovation inspired by John Fogerty (of the band Creedence Clearwater Revival).

Other pizzas give nod to the local culture, such as the Jacksonian or Mississippian, a pizza with pulled barbecued pork. Or if you’re feeling creative, you can build your own pizza. Soulshine’s numerous pizza toppings allow for thousands of different pizza possibilities.

Today, the restaurant’s radio entertains, but there is a small, empty stage in the center of the restaurant weighed down with guitar amps and microphone stands. On most busy nights, a band or other performer will perform their best acoustic set for the crowd in the vast, open dining hall.

The outside patio feels like more of a front porch than a restaurant patio. Students and Oxford residents pack the porch, sipping sweet tea and beer with orange slices on scolding Mississippi afternoons.

“I think people come here for the environment just as much as they do for the food,” Russo said.

“We usually do a lot of business this time of year with baseball season getting into SEC play,” Russo said. “Our busiest weekend is without a doubt Double Decker.”

“It’s a convenient place to meet up with everyone,” he said. “The staff is always super friendly. They play great music, not to mention the food.”

Chamber looking for Citizen of Year