TAKE HIM OR LEAVE HIM?: Nobody’s wrong when it comes to Nkemdiche’s first-round fate 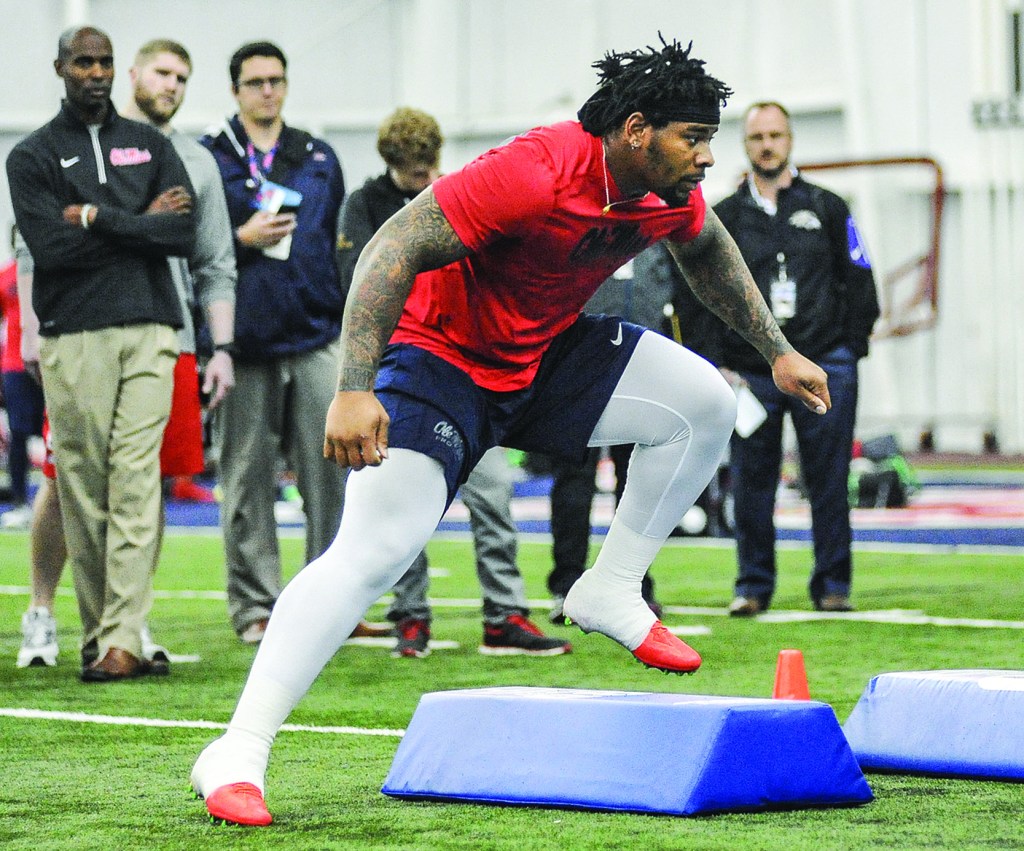 Former Ole Miss defensive tackle Robert Nkemdiche runs through a drill in front of NFL personnel during the school’s pro day on March 28. The talented yet sometimes troubled Nkemdiche is an enigma for NFL teams with the first round of this year’s draft looming tonight. (Bruce Newman)

It happens a lot.

Prospects who are almost guaranteed to go in the first round of the NFL Draft are invited to be in attendance and wait backstage in the green room until their name is called, but ESPN’s cameras always catch that one guy sitting with family members and representatives whose wait ends up being agonizingly longer than expected.

Green Bay All-Pro quarterback Aaron Rodgers watched 23 players get selected ahead of him before the Packers snatched him in 2005. Former Notre Dame quarterback Brady Quinn’s wait got so long two years later that commissioner Roger Goodell ushered Quinn away from the cameras and into a private suite until Cleveland took him No. 22 overall (hard to believe the Browns selecting a quarterback didn’t work out).

The prime candidate to be that guy this year is Robert Nkemdiche.

It’s an awkward, unfortunate predicament for any player to have to go through after being poked and prodded for months by general managers, coaches, scouts and just about any other NFL personnel you can think with the eyes of the sports world watching, though I can’t say I feel all that bad for them since they all quickly become 20-something-year-old millionaires.

But Nkemdiche is this year’s enigma.

Draft projections are all over the place on Ole Miss’ former defensive tackle. Some have him going as high as the middle of tonight’s first round while draft analysts such as ESPN’s Todd McShay (26th to Seattle) and CBS Sports’ Pete Prisco (32nd to Denver) have him sneaking into the back end.

And when people that well informed about the way teams are thinking are predicting him to be one of the last picks of the first round, that means actually joining former teammates Laremy Tunsil and Laquon Treadwell in the first round is no sure thing for Nkemdiche, who’s also attending the draft in Chicago.

By now, you know Nkemdiche’s talent isn’t the issue here.

Yes, teams are concerned about the lack of statistical production at Ole Miss (98 tackles, 19 tackles for loss and seven sacks in 35 games), but the nation’s former No. 1 overall high school recruit is a tantalizing 6-foot-4, 296-pound specimen whose rare combination of speed, strength and agility makes him a fit as an end in a 3-4 defense or a tackle in a 4-3. If you’re still not sure just how much of an isolated headache Nkemdiche can be for opposing offenses, go to YouTube and watch a replay of last season’s Alabama game.

But Nkemdiche has brought a lot of this uncertainly on himself after that drunken fall from an Atlanta-area hotel room in December that effectively ended his college career, which happened less than a month after his older brother, former Ole Miss linebacker Denzel Nkemdiche, was hospitalized the first of two times for undisclosed reasons.

Teams are reportedly concerned about Denzel’s influence on Robert, though Robert said after Ole Miss’ pro day last month he’s assured teams in interviews Denzel won’t be following him to his next city. As for that four-story fall under the influence, Nkemdiche said he’s tried to convey to teams that have questions about his dedication to the sport that that’s not who he is, but he’ll have to show them, not tell them.

Nkemdiche certainly has the ability to make someone tonight look like a genius and eventually morph into the All-Pro that’s expected of first-rounders. Yet he’s also given any team that doesn’t want to take the chance of having that kind of lucrative investment backfire plenty of reasons to pass.

You can’t blame anybody either way, but wherever Nkemdiche ends up — and whenever he ends up there — his story is a long way from being over. It’s a tale that doesn’t need to be about how he proved everybody else wrong.

Instead, hopefully for him, it will be about proving his future employer right.