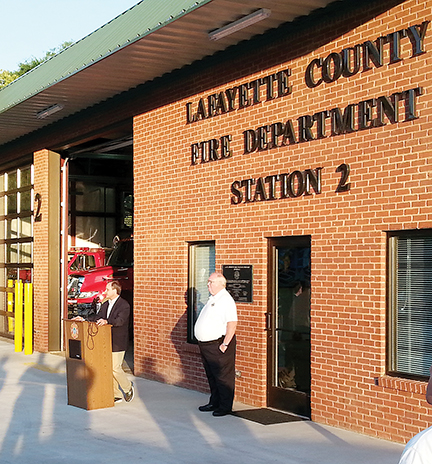 Rob Sigler Lafayette County officials and residents celebrated the grand opening of the county’s fire station No. 2 on Thursday evening.

Fire station No. 2 has been fully equipped and in operation for a couple weeks, but Thursday was an opportunity for residents to see the new facility.

Lafayette County Fire Coordinator Jerry Johnson recognized several local officials and others who played a role in making fire station No. 2 possible. But he especially thanked the Jim Cregar family for its generous donation of the land on which the facility is located.

“You’re on our team now and you’re part of this department,” Johnson told the Cregar family, who also were presented a plaque that will be placed in the fire station.

County officials are excited about increasing the county’s emergency services coverage with the new fire station.

District 2 Supervisor Jeff Busby was especially pleased and thanked the volunteers for their hours of service.

“Safety is my first priority in making sure the residents of this county are safe and I thank all of you for all you do for Lafayette County,” Busby told the crowd during the ceremony.

“We are real excited,” Johnson said. “It will be a great functional station for the next 30 or 40 years, we hope.”

Johnson said the station is planned with the future in mind and has the capability to be a manned station.

“It’s not just a place to house fire trucks,” Johnson said. “We hope the community comes and takes a look. We’re proud of it.”

The fire station, which took nearly six months to complete and cost almost $400,000, is similar to the fire station located on County Road 109 and Highway 6. It brings the total number of fire stations in the county to 14.

Heritage Builders in Oxford did the construction.