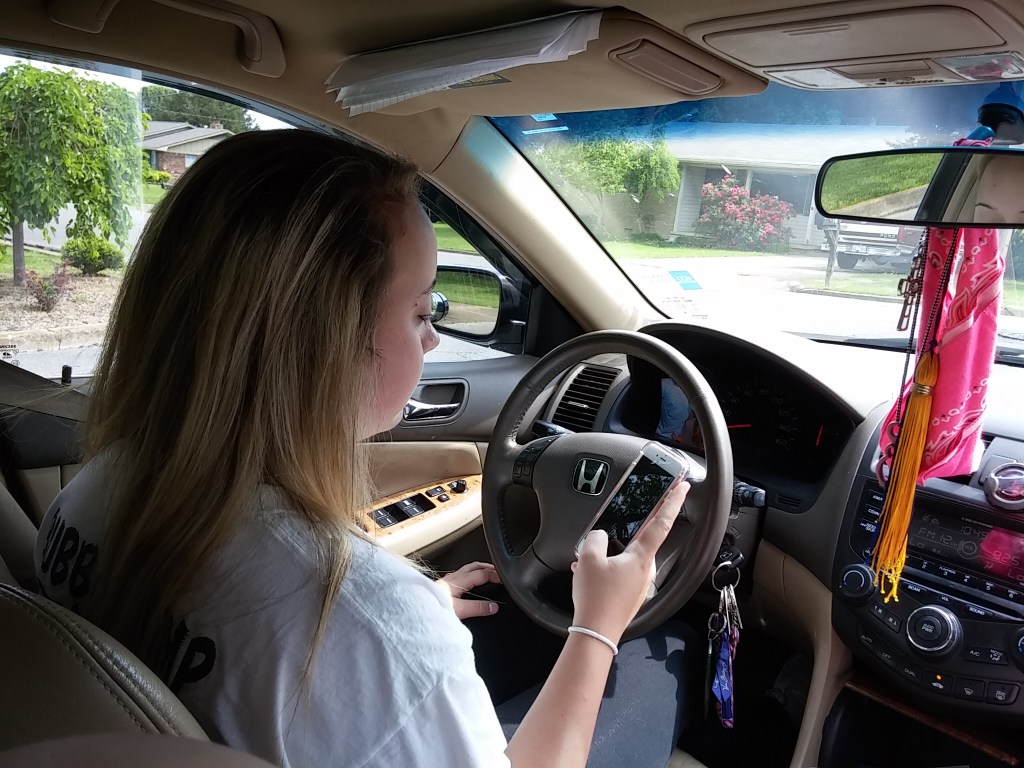 Texting and driving can be seen wherever you drive these days, police say.

If you are pulled over by the Mississippi Highway Patrol on the way home from work today because you were texting and driving, it would run you $25.

However, if you are pulled over by the Oxford Police Department for the same thing, it would cost $196.

That’s because due to the way the law is set up by the Mississippi legislature, municipalities cannot write a ticket for texting and driving. They must write it for careless or reckless driving, which carries a larger fine and a bigger ping against your automobile insurance.

However, in a couple months, even the fine from MHP and a county sheriff’s department for texting and driving will go up.

Winters said there is good reason for the fine to go up because of the danger distracted driving causes.

“Say you’re reading a text message, it’s equivalent to 4.6 seconds to read that message,” Winters said. “Going 55 miles an hour, you could drive the whole length of a football field without knowing what’s going on around you and that’s really dangerous.”

Winters and another officer travel around and teach about distracted driving at schools, companies and to officials.

“I think that if we teach our young adults, because that’s where it’s mostly coming from, we can prevent some of the things that are going on,” he said. “Because right now, texting and driving is just as bad as drinking and driving or impaired driving, in our opinion.

“Impaired driving slows you down and your reaction time down. With texting and driving, you’re still driving the same speed but you’re not looking down at the road.”

Winters said in 2014, nationally, 10 percent of fatal crashes, 18 percent of crashes that caused injury and 16 percent of all motor vehicle crashes were the result of distracted driving.

Winters said OPD can’t provide stats on the number of tickets due to cellphone use, but in Oxford a good number of minor crashes are due to distracted driving.

Out in the county, the Lafayette County Sheriff’s Department has not written any texting and driving citations since the new law was enacted, but Investigator Alan Wilburn said that’s not cause for alarm.

“At the sheriff’s department we are not structured to work a lot of traffic, we’re structured for more calls and complaints by the public and working criminal cases,” he said. “But, if a deputy sees someone breaking the law and it is a danger, the deputy will make a stop then and handle the problem and then we’ll proceed on to a call.”

The Mississippi Highway Patrol, which writes the bulk of tickets and holds routine checkpoints to assess for things like texting and driving, was unable to provide statistics.

Tips to stay off phone

To avoid being stopped by any agency, since typing on a cellphone is a primary offense, Winters recommends putting your phone on silent and putting it down and away so you are not distracted by a ping, ring or vibrate and not tempted to pick it up.

“Stay off those cellphones, iPods, radios, try to drive alone so you don’t have anyone distracting you,” he said.

Winters also wants to remind everyone that is it not cool to text and drive just because everyone else is, and he urges parents to know when their children are driving and to not text them during that time.

“Do you do it because everyone else does it? Is it smart? Does everybody else do smart things? Just because everybody else does it and because it’s cool or whatever, it’s really not cool because it can change your life forever,” he said. “If you wreck and kill somebody while texting and driving and they can prove it, then not only did that person lose their life, but you lose your life because you’re going to prison for vehicular homicide.

“Also, it’s not just for kids. It’s for us as parents. If you send your kid a message and they’re reading that message when they wreck, you have to live with that for the rest of your life.”