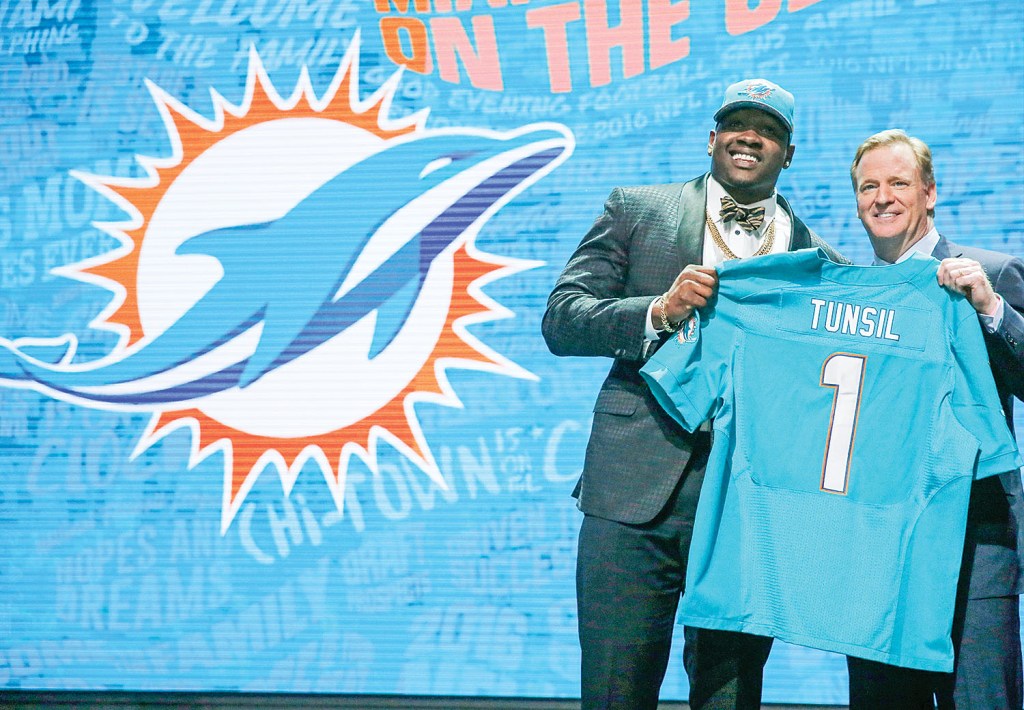 Former Ole Miss offensive tackle Laremy Tunsil poses for photos with NFL commissioner Roger Goodell after being selected by the Miami Dolphins as the 13th overall pick in the NFL Draft on Thursday in Chicago. (AP Photo/Charles Rex Arbogast)

For Ole Miss, the first round of this year’s NFL Draft was memorable for all the wrong reasons.

Laremy Tunsil tumbled out of the top 10 Thursday after a hacker posted a video of the Rebels’ former left tackle smoking a bong through a gas mask to Tunsil’s Twitter account just minutes before the draft started. Tunsil issued an apology and was eventually picked by the Miami Dolphins at No. 13 overall, but what happened next has Ole Miss doing some more investigating.

Shortly after Tunsil’s freefall ended, another hacking resulted in screenshots being posted to Tunsil’s Instagram account of an alleged text conversation between Tunsil and someone shown on the screenshots as John Miller, presumably Ole Miss’ assistant athletic director for football operations. In the alleged texts, Tunsil tells Miller he needs money for rent and family bills.

During a press conference shortly after being drafted, Tunsil was asked twice if he ever took money from a coach at Ole Miss. After denying it the first time, Tunsil later answered, “I’d have to say yeah.”

Ole Miss later said in a statement it is aware of and looking into Tunsil’s admission, which could be an NCAA violation.

“Like we do whenever an allegation is brought to our attention or a potential violation is self-discovered, we will aggressively investigate and fully cooperate with the NCAA and the SEC,” part of the statement said.

The NCAA is already conducting an investigation into possible rules violations at the school in three sports, including football, though it’s not known if Tunsil allegedly receiving money from a staffer is included in the Notice of Allegations the school has received because Ole Miss has not made the notice public. It’s also unclear to whether the text conversation posted to Tunsil’s Instagram account is authentic.

Ole Miss’ statement has been the school’s only response to Thursday’s events. Phone calls placed to athletic director Ross Bjork have not been returned.

Tunsil, who missed his introductory press conference in Miami after being treated for an allergic reaction, was asked about Thursday’s bizarre events when later speaking with the media in Miami on Friday, which was streamed live on the Dolphins’ official website. But Tunsil refused to address those inquiries, saying repeatedly, “I’m here to talk about the Miami Dolphins.”

During the alleged text conversation, Tunsil tells Miller he needs help paying rent, to which Miller responds, “See Barney next week,” which is presumably referring to Barney Farrar, assistant athletic director for high school and junior college relations. According to ESPN’s Joe Schad, Farrar said Tunsil never asked him for money nor did he give him any.

Tunsil also asks Miller what he should do about his mother’s $305 light and water bill. Miller answers, “I thought we all agreed on amt – that number keeps changing.” The alleged texts are dated Feb. 14, 2015 and April 7, 2015, though one exchange is timestamped out of chronological order with one of Miller’s answers to an inquiry coming one minute before Tunsil actually asked the question.

Tunsil was suspended for the first seven games of last season after the NCAA found he received impermissible benefits, including the free use of three loaner vehicles. He’s also the defendant in a civil lawsuit filed against him last week by his stepfather, Lindsey Miller, alleging a defamation of character stemming from the domestic assault charges both filed against each other last summer, which were eventually dropped.