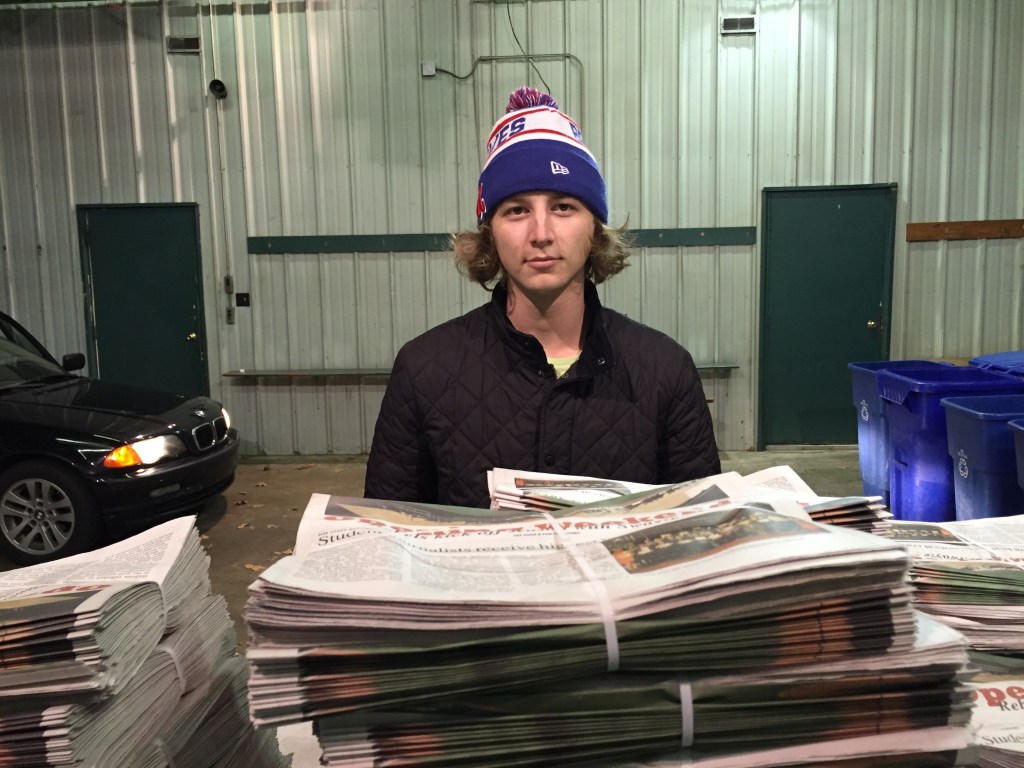 University of Mississippi student Luke Cowart can be found delivering the Daily Mississippian most mornings.

Luke Cowart is still getting used to early starts. While he struggles to pull his New England Patriots beanie over his hair with both hands walking out the front of the Kappa Sigma fraternity house, his cell phone alarm rings.

Cowart admits his “bedhead” doesn’t reflect his newfound preciseness. He reaches into both of his jacket pockets to pat down his pants pockets before running back inside the house to grab his cellphone charger. A few minutes later, he emerges early to begin his morning paper route.

Luke Cowart is often the first person to read The Daily Mississippian headlines.

After an unsuccessful semester last spring, mainly due to insufficient class attendance and tardiness, Cowart’s parents left him with one option – to pay them back for the classes he failed. Similar to the majority freshman students returning for their first spring semester, Cowart’s challenge wasn’t the course curriculum, but rather waking up and going to class.

“I had two 8 a.m. classes last spring, and I failed one because of absences,” he said, scrolling through his iTunes library on his iPhone while the seats heat up in his car. “This is that perfect push in the morning. I don’t think hard, but at least I’m up doing something.”

Before turning out of Fraternity Row, Cowart admits a love for the smell of coffee, but disdain for it’s actual taste. He turns right onto empty Jackson Avenue heading towards the Oxford Fire Department, where he picks up papers everyday.

Before reaching the first stop light to his destination, he passes three cars, and Cowart is already surprised by the amount of people sharing Jackson Avenue before 5:30 a.m.

“Before last semester, I never even woke up early enough to read the paper before class,” he said, pointing to the digital clock on his dashboard. “Now see, we’re 30 minutes early delivering it.”

Cowart holds his fingers over the volume knob of his car stereo, turning it down. Bracing for the build up of the song playing from his iPhone, he brags about the new stereo subwoofers installed in his BMW.

“My grandmother actually sent me the money for them,” he said, pulling up to the stoplight before turning into the Oxford Fire Department. “I told her how I cracked my speaker playing loud music, in order to keep me awake during my route.”

“She knew I was already working to pay my parents back, so she sent me money to replace my speaker. I saved the money and ended up replacing both of my subwoofers.”

Cowart eases into the empty garage of the empty Oxford Fire Department and notices the stack of newspapers on chest-level risers.

The sky begins to peak the first evidence of morning light just outside of the Oxford Fire Department as Cowart begins to fill his backseat with The Daily Mississippian newspapers. As he appears to be the first to arrive to receive his stack of papers, he said this is the fifth day in a row he’s been early to his route.

“It’s just me and four other kids that are able to do this,” he said, signing his name in on the ‘log-in’ sheet. “We all receive a group text every morning from our boss, asking if we’re on our way, and that’s about all the contact we have with him.”

As he begins to sort the stack of papers, Cowart said he got the job by convincing his boss, Resse Worthington, he was a decisive student.

“Only Ole Miss students are eligible for hire as delivery people for the university,” said Worthington. Each student is paid $30 a day and must provide his or her own transportation and gas.

Slamming the trunk of his car after he loads the final stack of newspapers, Cowart said, “It felt like a privilege getting hired, because I have free reign of when I can come and go without my boss actually seeing . . . But for my circumstances, it’s better to enjoy my luck then to stretch it.”