WORTH THE WAIT: Chargers weather rain, timing delays for North Half titles 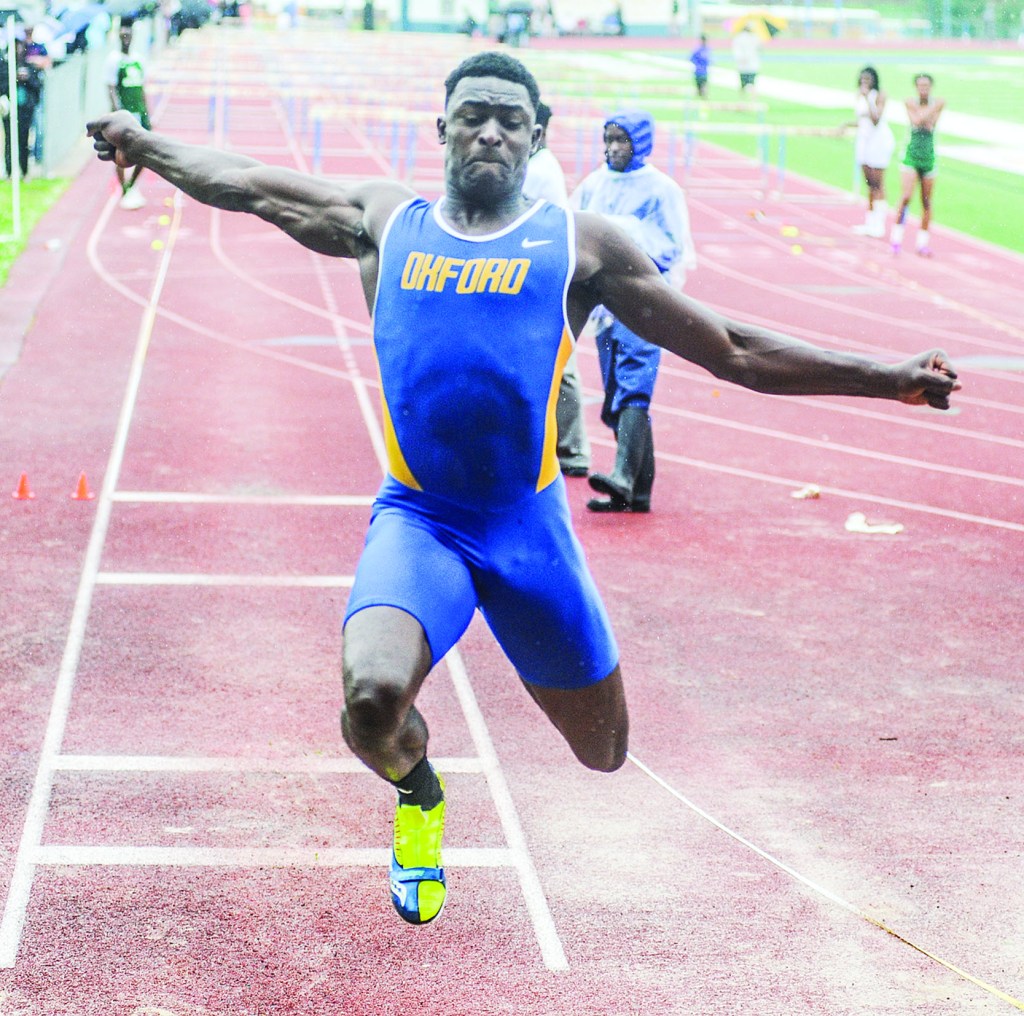 Oxford’s DK Metcalf jumps 46 feet, 2 inches as he competes in the triple jump at the MHSAA Class 5A North Half track meet at Bobby Holcomb Field on Saturday. Metcalf won the event as the Chargers’ boys and girls teams swept the team championships. (Bruce Newman)

It was a day of weather delays and technical issues, but all it did was slow down the inevitable as the Oxford High track and field teams dominated the Class 5A North Half meet on Saturday at Bobby Holcomb Field on the Oxford Middle School campus.

The boys and girls teams swept the competition to cruise into Saturday’s 5A state meet at Pearl High School with a lot of momentum. The boys’ team claimed its North Half title with a total of 226 points with Canton coming in second with 139 points.

The weather halted activity for one hour with rain and lightning in the area and then technical difficulties struck when the timing company hired by Oxford coach Chris Bush had its equipment fail, causing Bush to have to set up his own timing equipment and run the remainder of the events himself which delayed the meet even further.

The issues caused Bush and girls coach Chris Patton to not be able to keep an eye on their teams’ finishes as closely as they would at a meet they are not hosting.

“That’s the one thing about hosting meets is our guys and girls learn how to kind work on autopilot because we’re busy,” Bush said. “That helps because when we actually get to coach, we see improvements. They did a great job of stepping up.”

The field events got the day started with the Chargers claiming two individual titles. D.Q. Thomas won the discus throw with an attempt of 131 feet, 4 inches. D.K. Metcalf won the triple jump with a leap of 46-2. In the shot put, Jacquez Neilson came in second to qualify for the state meet with a throw of 47-1.

On the track, it was more of the same with Oxford continuing its winning ways. In the 200-meter dash, Jaquan Webb came in first with a time of 21.63 seconds while teammate Devin Rockette ran a 22.09 for second. Webb also won the 100-meter dash in 10.67.

“Another one of my records gone,” Bush said with a smile.

Oxford came in second behind Vicksburg in the 4×400 with a time of 3:22.42 but set a personal record in the process.

Metcalf, an Ole Miss football signee, also collected an individual North Half title with a first-place finish in the 110-meter hurdles, edging out Vicksburg’s Leon Miles by .01 seconds with a time of 14.64. Burnett won the 400-meter dash with a time of 48.38 while Gable came in fourth to quality for the state meet with a time of 49.78.

Lady Chargers roll
The Oxford girls claimed the North Half title with 208 points with Canton earning second place with 102 points.

The distance races saw Oxford sweep both events with Addie Thompson winning the 1,600 meters with a time of 5:47.13 while teammates Lilly Grace Mitchell and Margaret Adams finished second and third, respectively. In the 3,200 meters, Thompson finished first again with Adams claiming second.

The field events had Oxford winning one title as Charli Kendricks claimed the pole vault title with an attempt of 10-0 while Arden Davis took second at 9-0. Oxford had runner-up finishes in three other field events.