FINDING A NICHE: Once unsure of track, Walling closing out decorated career 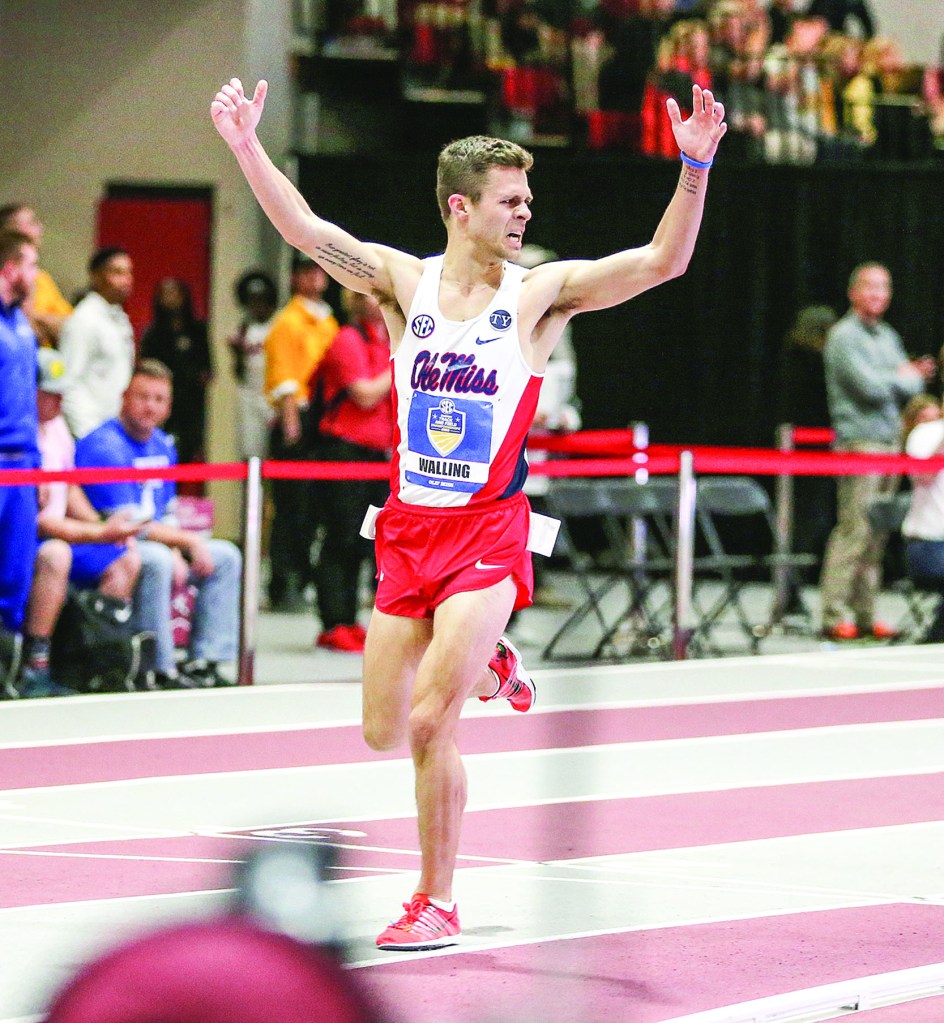 Graduate student Ryan Walling has put together a strong final season at Ole Miss after competing in the Atlantic Coast Conference for four years as a member of the University of North Carolina track team. (Tim Casey)

Butterflies. Sweaty, standing next to everyone like a herd of cattle. Adrenaline pumping. As soon as the gun goes off, it’s a fight until the finish.

Senior Ryan Walling has experienced this more than once as a distance runner for the Ole Miss men’s track and field team.

Walling is a graduate student with senior eligibility for athletics. He attended the University of North Carolina prior to Ole Miss. Aside from receiving All-ACC and All-Region honors at UNC, he has received a number of honors during this season at Ole Miss. Walling was named All-American at nationals and the SEC Indoor Championships, won the 3,000 meters and 5,000 meters at the SEC Indoor Championships, which earned him first-team All-SEC, and he won the Cliff Harper Trophy, which is given to the person who scores the most points at the SEC indoor meet.

“Growing up, I feel like I played every kind of sport,” Walling said. “I tried everything at least once. I actually wanted to play football in high school going into my freshman year, but our football team only had one win every season. My mom had me go out for the cross country team and I was good at it, so I kept it going from there.”

“Walling, on the track, is an animal,” he said. “His personal records speak for themselves. He loves competition, but he’s not afraid to enjoy simpler things in life, which is one of the many reasons he’s so successful.”

Walling works out every day and most days twice a day, Manahan said. “(Walling) leads by example, showing up and giving 110 percent every day.”

“When I’m preparing for a race, I try to keep as calm as possible,” he said. “I talk to my coach and teammates as a way to remind myself that I’ve done everything I should’ve done leading up to the race, that I’m ready, and then it’s usually pretty easy after that.”

The butterflies he gets before the start of a race all disappear once the gun goes off, and certainly are gone once he crosses the finish line.

“When I finish a race, I can have a ton of different emotions,” Walling said. “The first one is relief. Then your instinct is to look at the clock. Depending what the time says decides how the rest of your day is going to go, whether it’s good or bad.”

Outside of track and field, Walling is a graduate student studying recreation administration. Between practice and class, he feels school can be a distraction sometimes.

“I never hate going to practice and working out,” he said. “It’s the in-between school stuff that gets tough because I’d rather keep practicing or hang out in the training room.”

When he’s not in class or running, he tries to take his mind off of running in other ways. “Ryan Manahan and I try to set up different stuff to do,” Walling said. “We try to keep it relaxed outside of running because running’s not fun.”

Walling’s favorite memory from running in college is from this year’s SEC Indoor Championships, where he won the 3,000m. He also ran a personal best of 13 minutes, 49.44 seconds in the 5,000m last weekend in the Payton Jordan Invitational, the second-fastest event time in school history.

“I looked up at the big screen with about 100 meters to go, and my teammates and I were 1, 2, and 3,” Walling said of his SEC Indoor run. “To finish with two teammates behind me was pretty awesome, doesn’t happen very often.”