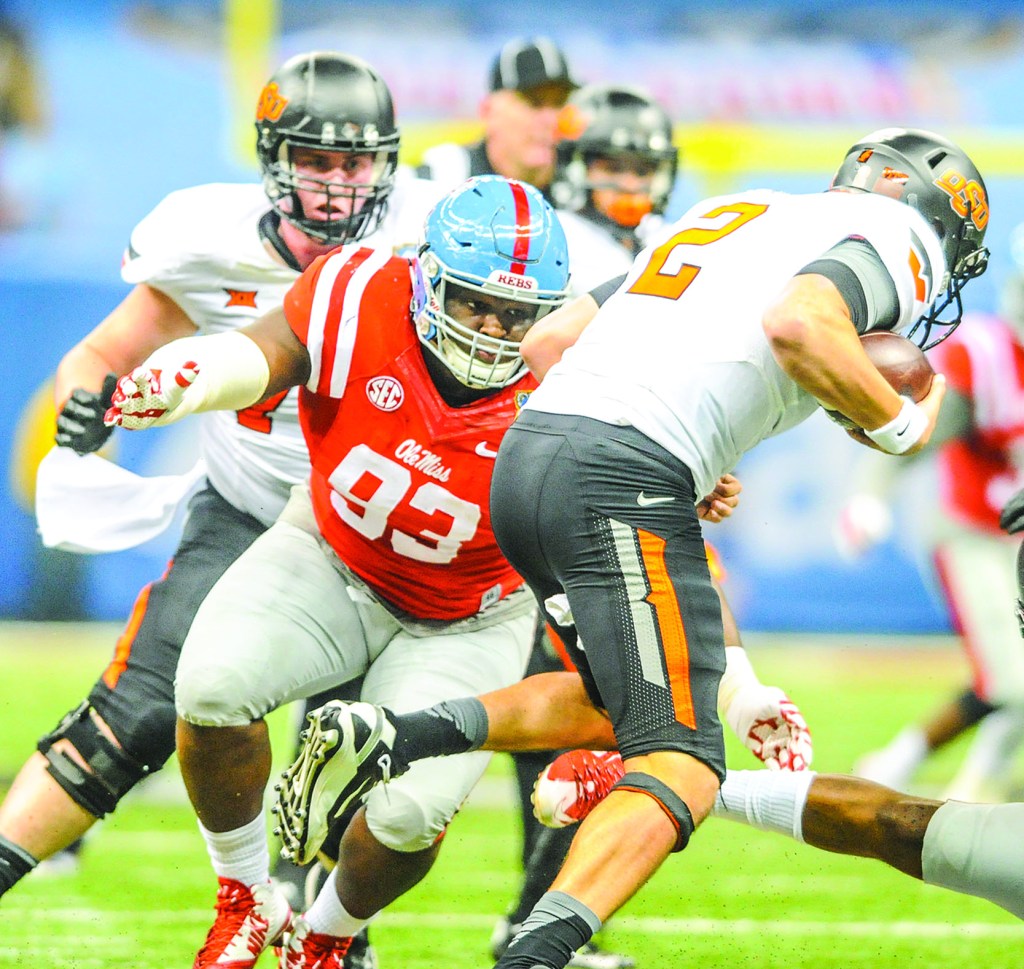 With Robert Nkemdiche and Woody Hamilton no longer a part of the defensive line, Ole Miss’ D.J. Jones (93) is preparing himself to be a key cog on the interior in the fall. (Bruce Newman)

A highly sought-after recruit before arriving on Ole Miss’ campus last year, D.J. Jones got an expected taste of life in the Southeastern Conference last fall.

But Ole Miss’ rising senior defensive tackle will be called on to do more this fall with the top of the depth chart undergoing a makeover at his position, a role he tried to prepare himself for as much as possible this spring.

“It’s very important for us to know who our starters are and know what they can do,” Jones said. “Me and Breeland (Speaks) need to step up and let this team and Florida State know what’s going to happen come that game (in the season opener).”

Jones and Speaks make up the new starting tandem on the interior of the Rebels’ defensive line heading into fall camp now that Woody Hamilton (graduation) and Robert Nkemdiche (NFL Draft) are gone. Jones, a one-time Florida State verbal commit, signed with Ole Miss out of East Mississippi Community College during last year’s recruiting cycle and showed flashes of what made him one of the nation’s top junior college prospects, immediately becoming a part of the rotation up front and finishing his first season in Oxford with 23 tackles and 5.5 tackles for loss.

The 6-foot, 324-pounder apparently picked up where he left off this spring.

Running with the first-team defense for a majority of the spring, Jones “stood out constantly,” Ole Miss coach Hugh Freeze said, at nose guard. But Jones said he wants to be earning those same compliments when it matters.

“It just means that when the season starts, we have to be the ones to make plays,” Jones said. “Right now, that praise doesn’t mean anything come the fall.”

Jones is quicker than most players his size as evidenced last season by his four sacks, which were second on the team only to defensive end Marquis Haynes’ 10. Being more than a run-stopper is something he focused on even more this spring.

Jones admitted there were times he learned that the hard way last season. It didn’t take him long to realize players he went up against had an equally firm blend of talent and strength and that the nuances to his game needed to be refined in order to get up to speed in the SEC.

“It took about three games into the season,” Jones said. “I got hit in the mouth a few times, so it came during the season.

“Game by game, you have to bring it all. You have to give it your all or you’re going to lose. Practice by practice, you’ve got to work.”

A full season’s worth of experience at this level has Jones feeling more prepared to handle his expanded role come the fall, but Jones said he doesn’t feel like he and Speaks, the heir apparent to Nkemdiche, have to shoulder the load on the interior by themselves.

Recent recruiting classes have steadily built the Rebels’ depth up front with a number of young bodies, including sophomores Garrald McDowell and Ross Donelly, redshirt freshman Austrian Robinson and true freshman Benito Jones, who enrolled early to go through spring practice. Issac Gross, whose senior season was cut short by a neck injury, is also back for a fifth season.