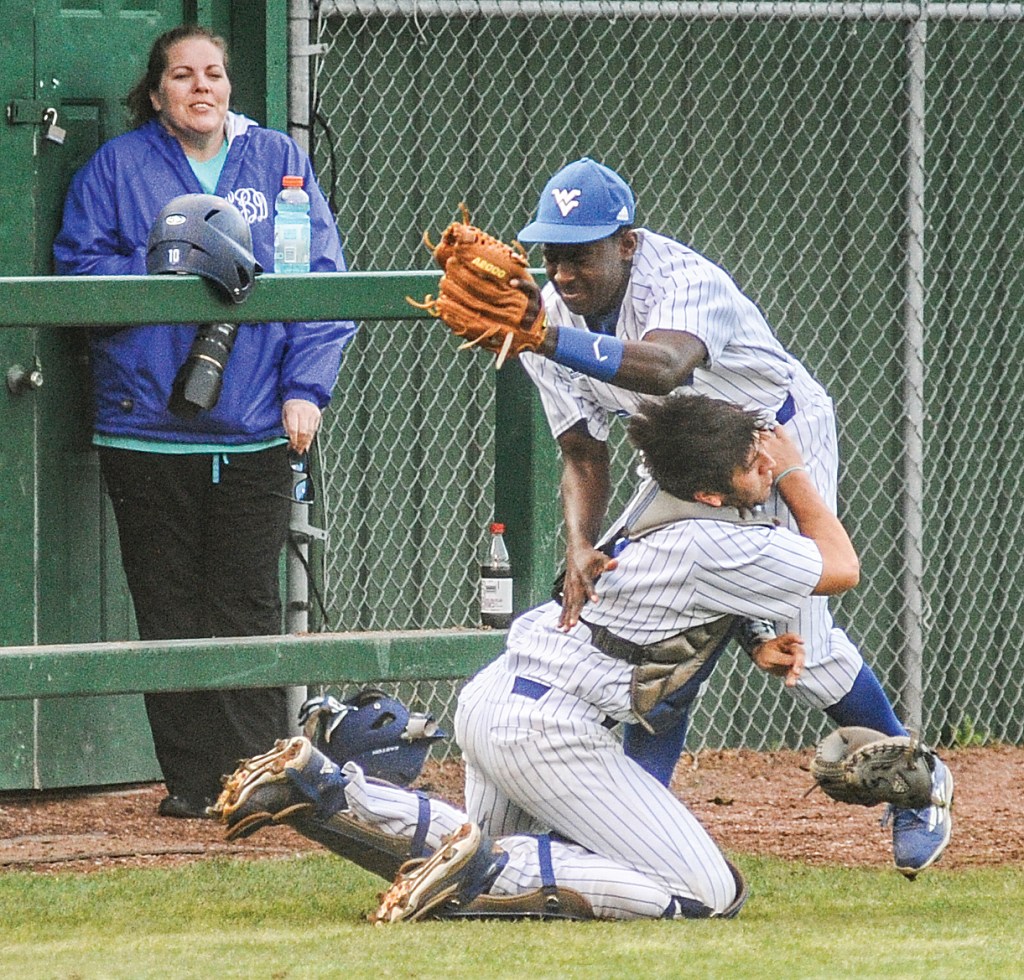 Water Valley third baseman Donovan Gaston (21) makes a catch for an out while colliding with catcher Ty Varner (4) against Nettleton in Game 3 of the teams’ MHSAA Class 3A playoffs series Tuesday in Water Valley. Nettleton won 4-1. (Bruce Newman)

WATER VALLEY — It took an extra day for it to happen, but the Water Valley baseball team’s season came to an end.

The Blue Devils dropped the decisive Game 3 of their second-round series of the MHSAA Class 3A playoffs to Nettleton by a score of 4-1 on Tuesday at Blue Devil Field on the campus of Water Valley High School.

Both starters from Game 1 on Thursday took the mound four days later and the results were the same as Nettleton’s Coleton Ausbern pitched a complete game for his second win in the series. Cooper Clement got the start for the Blue Devils (24-9) but had a shaky start.

After getting out of a jam in the first inning, Clement was not able to avoid damage two innings in a row as Nettleton got to him for three runs on three hits in the second frame. It became a 4-0 lead quickly with a solo home run by Tiger catcher Thaniel Thackett to lead off the top of the third inning.

The home run would end Clement’s day as he lasted a batter into the third, giving up all four runs off four hits. He walked three and struck out two Nettleton batters.

“I did an awful job calling pitches tonight,” Water Valley coach Kary Bridges said. “I never got him into a rhythm. While he didn’t have his best stuff, I didn’t put him in a great position early on and they got some hits. I put him behind in some counts, and I wish I would’ve done a better job.”

Shortstop Austin Smith relieved Clement in the third inning and kept Nettleton off the board the rest of the inning after the solo shot. Right fielder Kenny Goolsby closed out the game and kept Water Valley in it as he worked four shutout innings, giving up three hits and walking a batter.

“I wouldn’t expect anything less out of our guys,” Bridges said of his relievers’ outings. “We got a group of battlers, and they battled and stayed in it until the end.”

Ausbern allowed only one run in both of his trips against the Blue Devils. In Tuesday’s game, he gave up the lone run off of five hits while striking out five Blue Devil batters. Nettleton’s defense gave the Blue Devils chances while Ausbern did not. The Tigers committed four errors to allow Water Valley to have baserunners, but the Blue Devils could never bring them in to score early on.

Clement scored Water Valley’s only run in the seventh with a two-out RBI single up the middle, scoring second baseman Blayne Clark.

“Their pitcher did a great job,” Bridges said. “Our guys had a good approach at the end and they just made pitches. You’ve got to give (Ausbern) credit. He held us to one run both times. So many times in sports, we examine ourselves. Why did we lose? Well you know what? That pitcher just beat us tonight.”