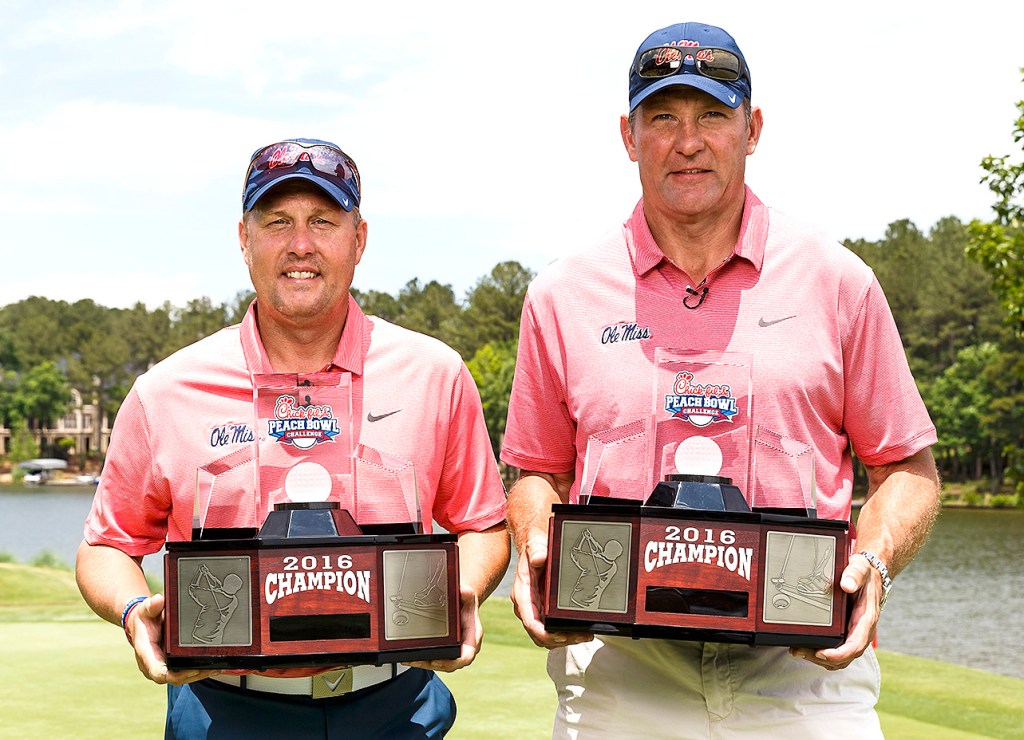 Team Ole Miss combined to shoot 6-under over the final five holes to win the annual celebrity golf challenge, going up against other teams from the Southeastern Conference and Atlantic Coast Conference at the Reynolds Lake Oconee Resort near Atlanta. Freeze and Walls combined to card a final score of 11-under to win by two strokes and claim the first-place prize of $100,000.

Ole Miss’ earnings will be split between endowed scholarships at the universtiy and the Freeze Foundation. The foundation, which Hugh created with his wife, Jill, was started recently to help assist the needs of orphans and children around the world.

“Congratulations to Ole Miss’ Hugh Freeze and Wesley Walls for an outstanding come-from-behind victory today,” Peach Bowl president and CEO Gary Stokan said in a statement. “The Rebels have been a wonderful partner of the Chick-fil-A Peach Bowl, our Chick-fil-A Kickoff Game and now as champions of our Chick-fil-A Peach Bowl Challenge. We are thrilled to donate $100,000 to them for university scholarships and the Hugh and Jill Freeze Foundation.”

The strong stretch to end the tournament for Ole Miss started when Freeze holed in an 8-iron from approximately 150 yards out on the par-4 14th for an eagle. Freeze and Walls birdied the final four holes to clinch the victory.

“The ball was jumping off my irons, and I knew I hit it good,” Freeze said in a statement. “Then Wesley said he thought he saw it disappear. I thought it was long, but I started walking to the hole pretty fast and found out it went in. That’s when we thought we had a chance.”

Said Walls, “I was just nervous and we both had a lot of adrenaline running through our veins. The way coach was putting, we knew we just had to keep the ball in play.”