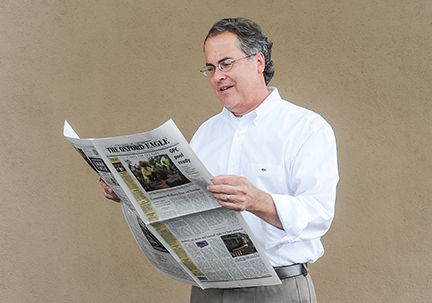 Longtime Oxford EAGLE Publisher Tim Phillips will resign his position on May 13. Phillips has been with the newspaper for 35 years.

Tim Phillips announced Tuesday plans to resign from his position as publisher of The Oxford EAGLE and pursue other interests. He plans to work through May 13.

“I’ve worked here in some capacity or another for 35 years,” Phillips said. “But it’s time to try something different. I’ll miss The EAGLE and its award-winning staff; they’re all like family to me. But it’s time for a change and for someone to take the reins who can carry on our family’s tradition for another generation.

“My Dad (former publisher Jesse Phillips) told me two things years ago, one was if I ever wound up in trouble with the law, the story about me would be on the front page, not page 2, and that the newspaper belongs to the readers. I’ve never forgotten that and neither has our staff. We work for them.”

Phillips, an Oxford native, literally grew up at the newspaper alongside his late father and brother Dan. He began selling copies of The EAGLE on the Square for 10 cents when the newspaper was still a weekly newspaper. He worked in the newspaper’s darkroom and circulation departments during his days at Oxford High School. He graduated with a bachelor’s degree in journalism from the University of Mississippi and began working full time at The EAGLE in 1983.

A new publisher will be named at a later date.

“We understand and respect Tim’s decision, but we’ll miss him. He’s become a good friend and colleague,” said Kevin Cooper, vice president of Boone Newspapers, which manages the newspaper. “You don’t replace someone like Tim, who has decades of experience and knows Oxford like the back of his hand. We will soon name a successor to lead our excellent staff and work to build on the good foundations put down by Tim and his family.”

Cooper will assume interim publisher responsibilities upon Phillips’ departure and will work from The EAGLE’s offices periodically until a permanent replacement is named.