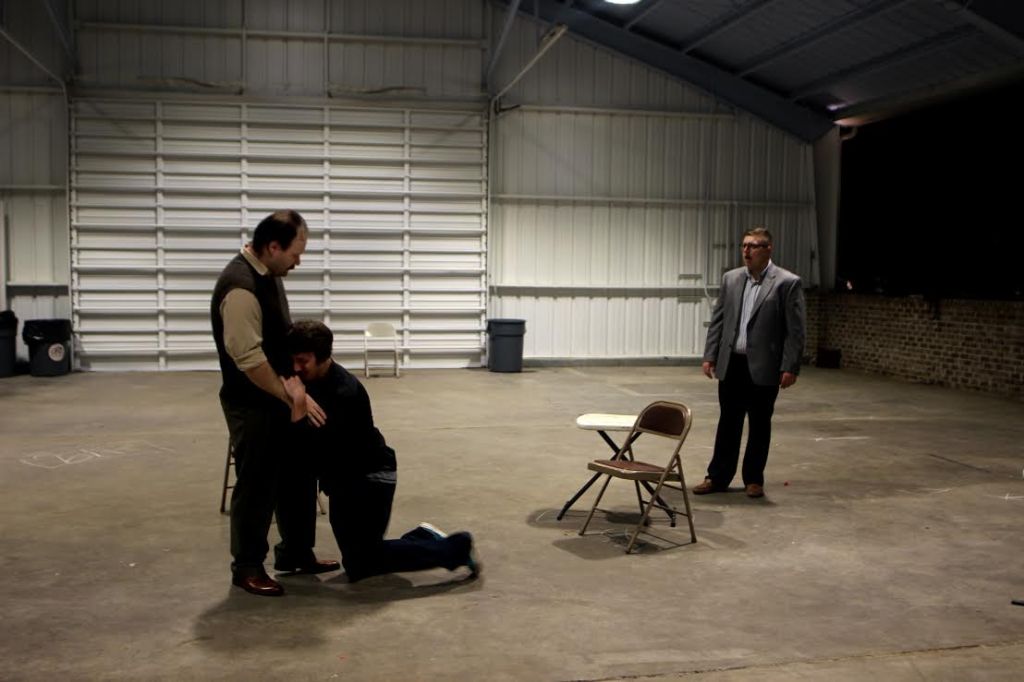 Actors with Glimpse Entertainment Company rehearse for this weekend’s showing of “The Goat or Who is Silvia?” that will be shown at 7 p.m. Friday through Sunday at the community pavilion where the old armory used to be located on Bramlett Boulevard. From left are Samuel Cooper, Tyler Nelson and Jason Hudson. The play has adult content and is recommended for mature audiences.

The first live theater production at the community pavilion will be this weekend, however it might be wise to leave the kids at home and make it a date night.

Glimpse Entertainment Company will present, “The Goat or Who is Sylvia?” at 7 p.m. Friday through Sunday at the pavilion. Tickets range from about $14 to $17.

The 2002 play by Edward Albee won a Tony Award for Best Play and a Drama Desk Award for Best New Play. It was a finalist for the 2003 Pulitzer Prize for Drama.

The show is for adults and has explicit content.

The tale of a married, middle-aged architect, Martin, his wife, Stevie, and their gay son, Billy, shows how their lives crumble when Martin falls in love with a goat and deals with social taboos.

Hudson is the founder of Glimpse Entertainment, which he started in 2012. Glimpse is arts collaboration.

“In essence, we hope to support and encourage all forms of art from theater to dance, music, visual art and more,” Hudson said.

Glimpse is currently applying for its 501(c)3 for nonprofit status.

“We strive to take the things that the arts council and educators are doing at the lower level and bring them up,” he said. “These educators lay the foundation work and our goal is to be the gap between beginner and professional.  We hope to accomplish that by providing many opportunities for artists to work.”

Hudson said they selected the pavilion to put on the company’s fourth performance because of its “blank canvas and large open space.”

“The venue is perfect to deliver this show in,” he said. “We also wanted the opportunity to determine how big the room was that this was happening in and this venue provided the perfect opportunity for that.”

Director McCalpin said when the group started the production they understood that due to the play’s nature it might offend some people.

“The nature of the arts is to offend,” he wrote in the program, “albeit in a way that the audience ends up learning a valuable lesson.”

McCalpin said at the heart of the play is a young gay teen dealing with decisions made by his family.

McCalpin said the plans for the play were well underway before Gov. Phil Bryant signed House Bill 1523, but he feels the play comes at a good time.

“It is not a response to decisions made in this state,” McCalpin wrote. “It is, however, a beautiful story about a family and what happens when someone makes the wrong decision. Just remember, everyone is different, and the choices made by one person should not and do not represent the choices made by all. A fitting thing to say about Mississippi in these troubled times.”