Initiative getting fruit in children’s hands 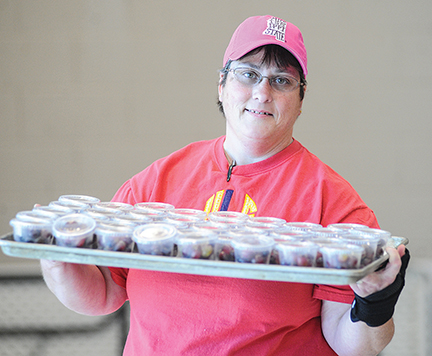 Sometimes there’s nothing like a bite into a freshly picked golden delicious apple, and Lafayette County school children learned that last week.

As part of an initiative with the University of Mississippi’s RebelWell, students in Lafayette County and Oxford schools are enjoying “fresh fruit Fridays.”

“We will distribute fruit for two more weeks, break for the summer, then pick back up in the fall for eight to 10 weeks,” said Wendy Carmean, project coordinator with RebelWell. “Hopefully, new funding will be in place late fall to continue the program throughout the 2016-17 school year.”

Carmean said she noticed a need for the program by watching her own kids.

“I had noticed in my own kids’ classrooms over the years that some of the kids were apprehensive about eating fruit — especially fruit they weren’t familiar with — but to no one’s surprise they would gobble down junk food in a matter of seconds,” she said. “So we came up with an idea that would put a variety of fruits in the classroom on a consistent basis. For some kids, it’s an introduction to a fruit. For others, it might replace an otherwise unhealthy snack. And for regular fruit eaters, it just reinforces a good, healthy habit.”

Mark Davis, food service director for Lafayette County Schools, said grapes are on the agenda for next week and then bananas. When school starts back up he is looking forward to putting out strawberries, kiwis and different things for the kids to try.

“We want to concentrate it at the lower ages to get the kids used to eating fruit,” he said. “You catch them young and get them trained up. We did it the first week and it went real good. We went through all the ones that we ordered.”

RebelWell and the schools work together and the fruit is shipped in. It’s prepared and then served in different ways. Sometimes it is put out in the cafeteria for all, including those who have brought their own lunch, and other times it is delivered to class as a mid-morning snack.

“Some of the Della teachers have provided some very positive comments,” Carmean said. “The Della kids will now cheer when we enter the room with their fruit. They get really excited to see what they will get to have for snack that day.”

Carmean said this program is a little nudge to get children enjoying fruit instead of processed sugary food options, and the group will pursue another grant from Blue Cross Blue Shield of Mississippi Foundation to continue it for time to come.

“We will definitely include this program in next year’s grant,” she said. “I feel like it has an impact on our community’s kids. This has been a pilot year so we are learning from it. I’ve learned I need more volunteers, more stickers and depending on the type of fruit for the day — sometimes more fruit.”