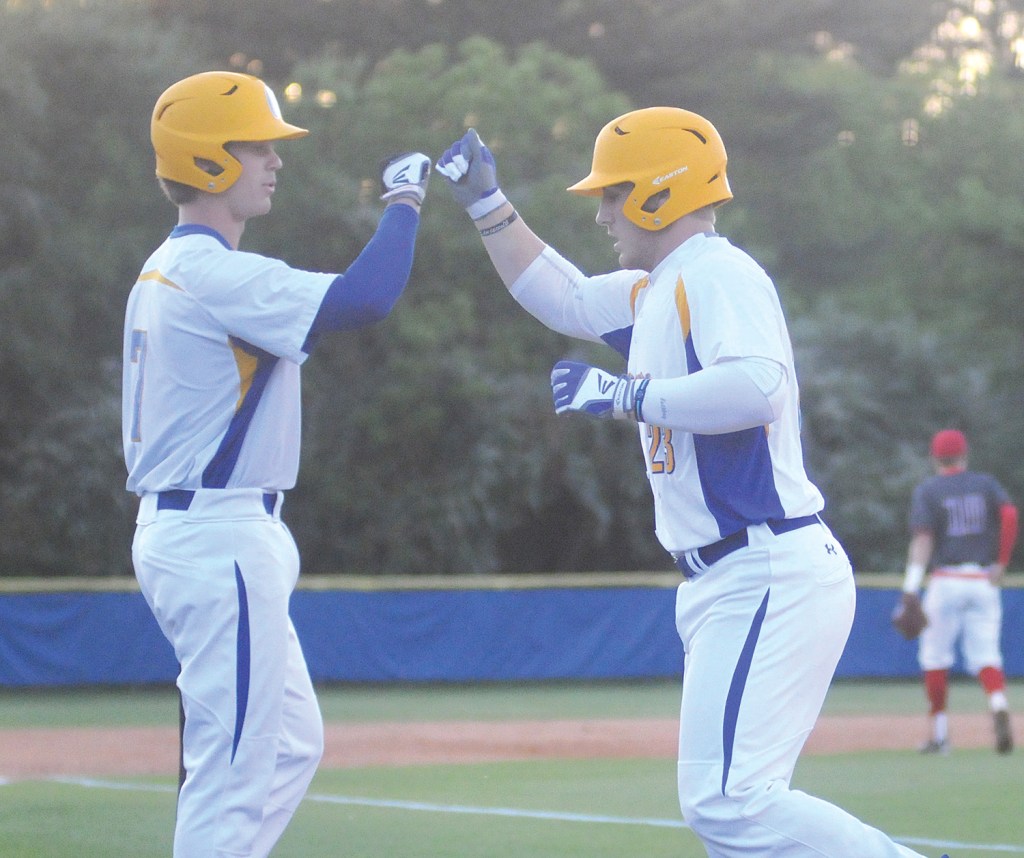 Oxford’s Thomas Dillard, right, is congratulated by teammate Jason Barber after hitting a solo home run against Center Hill in Game 3 of the teams’ MHSAA Class 5A playoff series at Edwin Moak Field on Wednesday. Dillard hit three home runs to set a new single-season school record as the Chargers advanced with a 10-0 win. (Davis Potter)

Game 3 of the second round of the MHSAA Class 5A playoffs between Oxford and Center Hill started off strong for the Chargers as a solo home run from Thomas Dillard put Oxford up 1-0 in the first inning.

Dillard added two more long balls, leading Oxford to a 10-0 win Wednesday at Edwin Moak Field that put the Chargers in the quarterfinals. Oxford will face Ridgeland starting tonight at home at 7.

Dillard is now at 14 home runs on the season, which is a new single-season school record.

Oxford starter Houston Roth walked the first batter of the second inning, causing Dillard to walk out to Roth in an attempt to calm him. The pep talk from Dillard proved to be effective as Roth struck out the following batter and caused an easy groundout to get the remaining outs. Center Hill would get its first hit from Regen Kuluz, who narrowly beat the throw to first from Drew Bianco. Roth would strike out the next batter, but a grounder into right field would put Parker Haberstrough on base and Kuluz in scoring position. Roth would counter those two hits with two strikeouts, his fifth and sixth of the game, to hold off the Mustangs’ surge.

Two errors would lead to Grae Kessinger getting in scoring position and eventually crossing home two batters later, giving the Chargers 2-0 lead. A sacrifice fly from Jason Barber would drive in Dillard, adding to the lead. Austin Pace would eventually close out the inning without letting up any more runs, holding the lead at 3 going into the top of the fourth. Not to be outdone by Pace, Roth struck out two of the three batters he faced, once again preserving the lead and giving the home team a chance to capitalize on its defensive efforts.

The top of the Oxford lineup would get the better of Pace in the fifth. Kessinger and Bianco had back-to-back singles, putting Kessinger in scoring position with the dangerous Dillard up to bat. With two strikes against him, Dillard crushed a three-run home run over the center-field wall, his second home run of the game. In the bottom of the sixth, Dillard hit another home run to break the single-season record.

Roth struck out nine in the complete-game win, improving to 8-0.