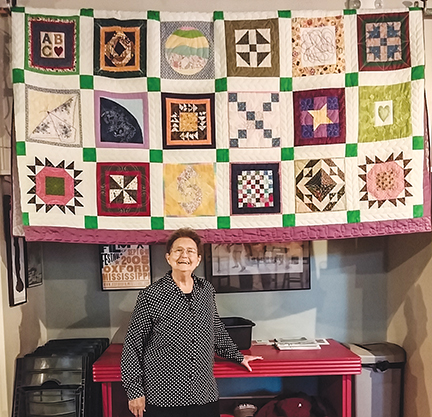 Clara Davidson stands by her quilt project at Shelter on Van Buren on Wednesday.

Quilters can be heroes too.

The Piecemakers Quilt Guild has tackled a variety of projects to get quilts to those in need, like veterans at the veterans home, children in group homes and much more, and Lafayette Countian Clara Davidson has been a driving force behind that.

Davidson and the guild’s current effort is an “Orphan Block Quilt” up for auction and hanging at the Shelter on Van Buren. Proceeds go to the guild and will be used to make children’s quilts for the Department of Human Services.

“I requested that everyone who had what I refer to as an orphan block, which was one little block maybe they had left from a quilt that they made, that they bring them in,” Davidson said. “At the next meeting I put on the wall what I had done to those first blocks, and that really set them on fire and they started bringing in more. Pretty soon I had more than enough to make the quilt.”

She worked about a month on it to put a border around the squares, make them big enough and then passed the project on to Barb Pampel to finish it up on a machine and then it went to Jean Crawford for hemming.

“The girls were really happy with it,” Davidson said. “As a matter of fact, Ann O’Dell said I took a sow’s ear and made a silk purse out of it. And I was highly complimented by that.”

Davidson started getting serious about quilting big time when she retired 17 years ago, but has been sewing since she was 11 years old when she got her first sewing machine.

“I had made five quilts by the time I was married,” she said. “I like the challenge of piecing the tops. I have hand-quilted a few but my health keeps me from doing that anymore, so I have long-arm quilters to do the quilting.”

While a member of the Piecemakers, Davidson was the chairwoman for the charity/comfort quilts for two years and was part of an effort that brought 36 quilts to the veterans home.

“I was like the cheerleader,” she said. “I said let’s do this, and I had some good participation. They call it comfort quilts because we give small quilts to the veterans and to children in group homes who have been abused.”

She said she’s learned a lot from the ladies in the group and recommends checking it out.

“I find this group to be a very nice group of ladies, friendly and helpful in our monthly business meetings and we invite anyone who is interested to come on the second Saturday of every month at 10:30 in the morning,” she said.

But for those who aren’t into being in a group, she still recommends quilting because it can bring so much joy and comfort.

“When I sit in front of the sewing machine, honey, I don’t have any troubles, no worries, no money and I have a stash that would challenge Walmart’s fabric department,” she said.