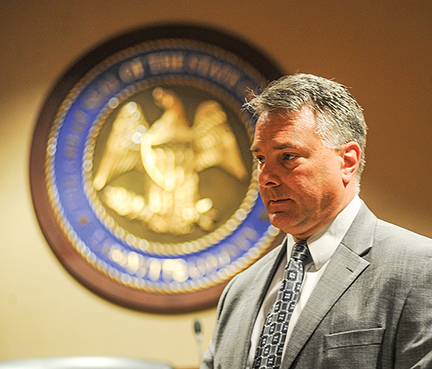 Jon Maynard of the Oxford-Lafayette County Chamber of Commerce speaks about the organization’s plans to attract new industry to Oxford on Thursday. Maynard was speaking in the wake of Caterpillar’s announcement that the company would be closing its Oxford plant.

Project Butterfly is now in effect.

Concern and a need for solutions drove area officials and members of the Mississippi Development Authority to create a plan to deal with the Caterpillar closure, and it has been named Project Butterfly.

“We have a plan in place and we are sticking to that plan,” said Jon Maynard, Economic Development Foundation and Oxford-Lafayette County Chamber of Commerce president and CEO.

The manufacturing company announced last week it was closing five facilities, including the one located in the Max Hipp Industrial Park where more than 200 employees will lose their jobs in the next 18 months. The facility in Oxford manufactures couplings.

Maynard held a press conference Thursday at the Chancery Building to announce that the EDF team is partnering with several other agencies in the effort to find new jobs for those being impacted by the closure. The employees were averaging $15 to $17 per hour at Caterpillar, which will be used as a barometer for the next tenant.

Maynard emphasized the closure is not due to issues in the county or the state, but rather the global economy.

“Caterpillar has to make decisions sometimes that are in the best interest of the corporation and stockholders going forward. It is not the decision that we necessarily like, but one we understand as the best thing for their business at this time,” Maynard said. “Cat has employed as many as 350 employees at the Oxford plant for over 15 years and we as a community appreciate their investment in our community and certainly hate to see them leave. We offer our assistance to them in any way possible as they transition through the eventual plant closing process.”

County and city officials have empowered Maynard to take the lead in the effort in locating a new company to occupy the Caterpillar facility, which was paying a little over on average a million dollars each year in county taxes, according to Maynard.

Maynard is looking at the Caterpillar shutdown as an opportunity and characterized the closure similar to when Emerson closed and Winchester moved into the industrial park. Winchester now employs more than 1,400.

Maynard said currently infrastructure information is being gathered on the Caterpillar facility so that it can be marketed. His team will then create a short list of possible manufacturers that will be the “right fit” for the facility, which is expected to be available in early 2018. Caterpillar intends to sell the facility, according to Maynard.

A workforce study also will be conducted. He admits that the number of potential employees in Lafayette County is thin. In fact, of the 240 Caterpillar jobs that are being lost, only about 100 are employees who live in the county.

He said that he and elected officials will work on incentives that can be offered to the new tenant.

“Incentives don’t make a bad deal good, they make a good deal better,” Maynard said. “We don’t want to have anything that’s lopsided. In other words, we’re not going to give away the store. We’re not desperate. We want to make everything work well for a future so that in 50 years that company is here and not just because they got incentives for the first 10 years. We want them here forever because they want to be.”