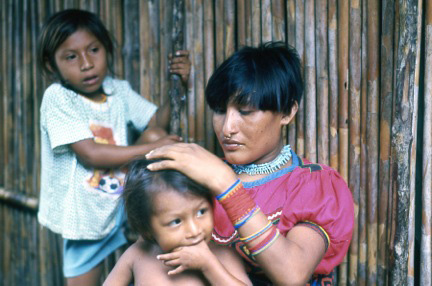 During the three years I lived and worked in Venezuela, I took advantage of every opportunity to travel.

One summer I decided to explore Central America by traveling the Pan American Highway by bus. That way I could see as much of the countryside as possible.

I flew from Caracas to Panama City where I would begin my journey on the Pan American Highway. As I was standing at the airport trying to figure out the best way to get into the city, a woman my age was also doing the same thing. We located a bus going into Panama City and sat next to each other. She told me that she was an anthropologist from NYC and had come to Panama to do some research on the Kuna Indians who lived on the San Blas Islands just off the coast from Panama City.

I expressed my interest in what she planned to do, and she invited me along with her. She had booked a little four-seater aircraft for the next day to fly to one of the more remote islands in the chain. She knew that this particular island had not had many overseas visitors, and that is why she wanted to go there.

Early the next morning we boarded the little Cessna and took off for the 30 minute ride to the island. The landing strip was just matted down earth, and the airport terminal was a grass shack. Very soon a boat came to meet us and transported us to the island. We were the only visitors on the island, and people were as curious about us as we were about them.

The Kuna Indians are known for their brightly colored cloth panels called molas, which they use to make their blouses. Molas are made using several layers of different brightly colored cloth, which are sewn together. Parts of each layer are then cut to form the designs. The edges of the layers are turned under and sewn down. The designs are either some type of animal shape, or an abstract design. I was able to buy some of the beautiful molas, which are hanging on my walls today.

Our accommodation was a hammock hung from the beams of an open hut. Unfortunately the night before we arrived, a scorpion had bitten one of the women in the hut as she slept, and her leg was swollen and looked very painful.

As a result I slept fitfully as I was on scorpion patrol trying to keep them off me. The bathroom situation was odd as people just went to the docks over the edge of the water and squatted. There were no outhouses or any kind of privacy. There was also no toilet paper. Bathing was accomplished by using a bowl of water.

We were fed food kept for special occasions; which consisted of canned Chef Boyardee spaghetti with rice on top, and a fizzy orange drink. I could only imagine how hard it had been to obtain that food for us, and felt honored to be served such a special meal. It tasted delicious too!

The women all had dark lines down the center of their noses with little designs on the end of the line. We were told the lines would ward off evil spirits so we asked to have the lines painted on our noses. It was only later that we realized the ink was permanent. The line on my nose lasted throughout my trip through Central America, and was still visible when I returned to the States. At least the line protected me from evil spirits during my entire trip!

We stayed on the island for three nights, at all times we were treated very graciously, and it was an experience I will never forget. Then my new friend and I parted ways as she flew back to NYC.

Jumping out of windows

I stayed on in Panama for a few more days, as I wanted to take a train trip along the Panama Canal from Panama City on the Pacific Ocean to Colon on the Atlantic Ocean. The 48-mile train ride went through some very dense jungle and I could only imagine the hardships the people who built the canal dealt with.

Some parts of the Panama Canal were actually quite narrow which surprised me as I imagined it to be huge. There were three sets of locks, and I was able to see the Miraflores Locks and watch the water flowing in to raise the level of the lock so that the ships could pass through.

On my last night in Panama City I stayed in a small, inexpensive hotel. The lock on my door was very flimsy which concerned me a little. In the middle of the night I heard the door handle rattling. I quickly jumped out of the window, fortunately I was on the ground floor, and ran to the office. The night manager laughed at my predicament, but took action and moved me to a room near the office with a secure lock.

I had no more adventures that night, but plenty more as I continued my travels on the Pan American Highway.

JOANNE WILKINSON is an Oxford resident and can be reached at jwilkinson1487@gmail.com.