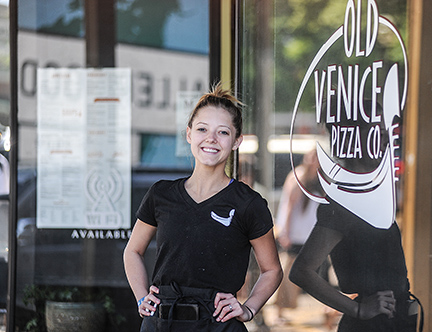 Sadie Johnson works at Old Venice Pizza Co. The waitress paid the bill of a family with tips she earned.

Grenada residents Butch Jones and the Rev. Elizabeth Wheatley-Jones visit Oxford frequently for their weekly date nights to have dinner on the Square. They come for the great food and fun atmosphere that Oxford is known for.

During their last visit, while dining at Old Venice Pizza, they received so much more than a good meal.

Their waitress, Sadie Johnson, was friendly right from the start and couldn’t get enough of their 9-month-old baby. The Joneses and Johnson struck up conversation that went beyond the normal chitchat a waitress may have with her customers.

Johnson learned the Joneses were foster parents of the baby and his 20-month old sister who wasn’t with them that night. They also have a 4-year-old adopted son.

“I thought it was so cool,” Johnson said, who was herself, legally adopted by her step-father and has an adopted brother. “It takes a really special person and family to be foster parents. You know it doesn’t always mean you can keep the children forever, but you show them love and care and make them feel special. They really touched me.” 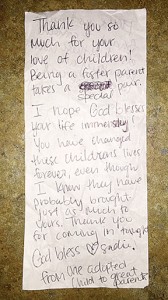 butch jones
Waitress Sadie Johnson left this note on the back of the receipt thanking the Joneses for being foster parents. Johnson, who is a server at Old Venice Pizza, was also adopted and paid for the Jones’ meal.

When the couple’s check arrived, they were told it was taken care of, paid for by someone else. The note revealed it was Johnson who paid for the couple’s tab. She thanked them for being special people and asked them to pay it forward.

“I wanted them to know what they’re doing is appreciated,” Johnson said. “And that it doesn’t go unnoticed.”

The Joneses left whatever cash they had in their wallet as a tip but it was far less than she deserved, Elizabeth said.

“I had tears on my eyes,” Elizabeth said. “It was such a powerful statement. It was a deep moment, one that goes way beyond what you usually share with someone you just met. She was so sweet and sympathetic and genuinely caring. We were deeply moved by her gesture.”

The Joneses decided to become foster parents a few years back. They couldn’t have children of their own but had the time, resources and love to share with a child. While knowing that a foster child may not be in their lives forever, Elizabeth said she focuses on the time she has with her foster children.

“We’re their parents for a season, we hope for a lifetime, but whatever time we serve as their parents, we want it to be life-giving and formative,” she said.

Johnson will be going home soon to Corinth to finish cosmetology school. She works as a waitress to help pay for her schooling but also finds it an opportunity to serve.

“Jesus served others,” she said. “Life isn’t all about you. It’s good to take a step back and wait on other people sometimes, let them relax and have a nice meal.”

Johnson paid for the Jones’ tab with the tips she earned that night.

“I don’t have a lot of money, but God provides, and I knew he wanted me to show these people appreciation and love,” she said.