From a life of addiction and homelessness to a UM degree 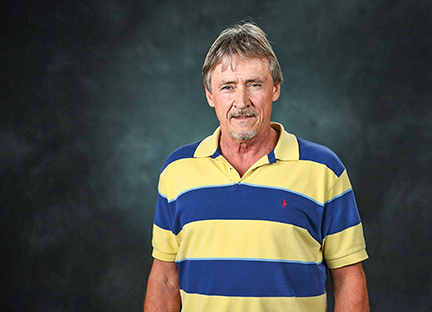 In 2008, Ricky Clayton was in his early 50s, lost in the throes of a life-threatening painkiller addiction and homeless in Memphis.

Substance abuse had been with him like a shadow for more than 30 years. In 2005, his brother died alone from a heroin overdose in a Burger King bathroom. Clayton, who was himself hopelessly addicted to dilaudid, a powerful opioid prescription painkiller, also took methadone or heroin, both readily available opioids that helped him avoid the painful symptoms of drug withdrawal when he didn’t have dilaudid.

“I was pretty much hopeless,” Clayton said. “I had tried to quit the pain pills over and over and I couldn’t stay clean, so I just went and got on methadone, which is a terrible addiction too, but it keeps you from being sick. You can take that and it lasts all day.”

Though the odds were stacked against him, Clayton’s story has a happy ending. On Saturday, Clayton, 60, now a clean and sober grandfather, will receive his bachelor’s degree in social work from the University of Mississippi.

A U.S. Centers for Disease Control and Prevention study published in January found the yearly rate of U.S. opioid deaths has tripled since 2000. In 2014, drug overdoses accounted for one-and-a-half times more deaths than from car crashes. More than half a million people in the United States have died from overdoses since 2000, with opioid pain relievers and heroin being the main drugs associated with those deaths.

All this makes Clayton’s achievement a monumental one. The pride he feels in this milestone is evident when it’s mentioned.

“It’s a dream I had when I was young, and I never thought I was going to be able to attain it because of my addiction, but if you stay clean, it goes to show you anything is possible,” Clayton said. “I’m going to be so proud.

“I had a lot of help. A lot of good friends just kept encouraging me. It’s hard to believe I finally made it.”

Clayton’s addiction story began in the 1970s. Pills started as a recreational drug when he was a young man who, like many of his generation, experimented.

“I never thought it would end up the way it did,” Clayton said. “I was just really curious and it progressed, and before I knew it, I was addicted. You become physically addicted to the opiates and it changes your whole world because it’s like a mental obsession. You have to have it. You’re also physically addicted. It’s terrible.”

While he was homeless, the Memphis Union Mission on Poplar Avenue became a haven for Clayton. On cold nights, if he could afford the $6 cost of lodgings, he was able to stay there and get a meal. Downtown churches also feed the homeless.

“You just learn how to survive,” Clayton said. “There are a lot of people there living off the street. I’ve slept under a bridge before.”

On the streets of Memphis in 2008, he began to take stock of what addiction had done. He’d watched it kill his brother, end his own marriage, cause him to lose his job and lead to him doing a stint in jail. Ultimately, it caused him to not be able to afford a place to live and had left him homeless for a year.

He decided to go for his sixth stint in rehab. He was determined to do whatever it took to get better.

Addiction counselors at Haven House in Oxford urged him to begin college classes at Northwest Community College and follow the dream of earning a diploma that he’d abandoned years ago when drugs overtook his life. He worked at Haven House and studied at Northwest, then came to Ole Miss.

While studying here, he’s leaned heavily on UM’s Collegiate Recovery Community, which offers a community of support for recovering students to help them achieve academic goals. The comfort he’s found with the group has helped tremendously, he said.

“They helped me financially, plus we meet on campus every few weeks and just share problems we are having with our education,” Clayton said. “That’s a great resource that a lot of people don’t know about.”

Susan Nicholas, an academic mentor for FASTrack, who is also a Collegiate Recovery Community volunteer, said Clayton is one of the hardest-working students she’s ever known.

“Many things about college did not come easily or naturally for him, and he painstakingly worked through those things,” Nicholas said. “However, what did come naturally to Ricky was engagement with new ideas. He has been an excellent student, while also working an almost full-time job and giving service in the recovery community.”

She sees a bright future for Clayton.

“Ricky has been and will continue to be an asset to our community for many years,” Nicholas said. “I am so grateful he chose the University of Mississippi.”

Clayton has been a natural leader and mentor for younger students in the group, said Beth Spencer, a lecturer in English and the CRC faculty adviser. Spencer said he’s also one of the hardest workers she’s ever met.

“He arrives early to the meetings to help set up and stays late to help clean up,” Spencer said. “Over the years, he has met academic challenges by seeking out professors and staff on campus who can assist him, always with a steady determination and positive attitude. The CRC would not be the same without Ricky.”

For the past three years, Clayton has also helped others reclaim their lives as a staff member at Oxford Treatment Center, a private addiction treatment provider in northeastern Lafayette County.

He has worked as a weekend counselor for its sober living program while completing his internship during the week at its Oxford Outpatient Office. His work has included facilitating a weekly aftercare group that supports those in their first two years after treatment.

“Ricky’s dedication is inspiring to all of us,” said Lisa Hillhouse, a clinical therapist at the center who supervised Clayton through his internship there.

“His personal experience, alongside his education and training, have made him so effective in helping our clients. They know he understands their perspective, and they can sense how deeply he cares. We value the difference he makes in people’s lives and are so proud to celebrate what he’s accomplished.”

Clayton’s two grown sons and his grandchild will be among those cheering him on at Commencement. Restoring relationships with his family has been an important priority during his recovery. He is also focused on pursuing a master’s degree in social work.

He urges those who are struggling with addiction to seek professional help to get sober, and also to lean on the support of a recovery community while they pursue their dreams.

“You have to keep persevering and never give up,” Clayton said. “Don’t be discouraged by how far away your goal seems to be. You can do it if you just keep trying, one day at a time.”