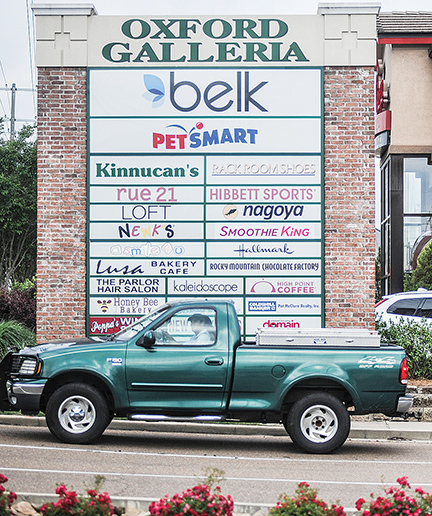 The Oxford Planning Commission approved a sign ordinance variance for a pylon sign developers plan to build at the entrance of the new shopping center that looks just like the existing sign in front of Galleria I, where Belk is located.

The city’s sign ordinance, passed in 2004 and updated in 2014, allows a shopping center one entrance sign at a total of 100 square feet.

Developer John Treservant asked the commission Monday during its regular meeting for a variance to allow for his sign to be a total of 176 square feet for the 200,000-square-foot shopping center currently under construction.

Galleria I was constructed around 2008 and has an entrance sign about the same size as the one Treservant requested for Galleria II; however, city planners say that sign was permitted in error, the size miscalculated, and should never have received a building permit as the size was larger than the ordinance allowed.

Treservant said he designed the new sign for Galleria II without knowing the Phase I sign was out of compliance.

Treservant said when his tenants signed their leases, they were promised a spot on the entrance sign of a specific size that would fit on the 176-square-foot sign.

“I have a legal obligation to these tenants,” he said. “If I have a sign half the size of Galleria I’s sign, it will look like I ran out of money.”

Some of the national chains going into the new shopping center include Dick’s Sporting Goods, Ross Dress for Less and Marshalls.

The site plan for Galleria II was approved in 2014; however, the signage was not part of the site plan. Minutes from the commission meeting state that the developers would have to come back before them to have signs approved.

“You entered into the leasing contracts after the site plan was approved but knowing the signage had not yet been approved,” said commission member Duncan Gray.

Treservant said since the Galleria I sign was approved, he felt safe in planning on building the same exact sign for the second phase of the shopping center.

City Attorney Paul Watkins told the commission that even if the first sign was approved in error by city staff and granted a permit, the commission was not obligated to make the same mistake twice.

“You’re not bound to do something the same way if the first one was not done correctly,” Watkins said.

Treservant said he could have legally subdivided the shopping center into two parcels which would have allowed him two 100-foot signs at two entrances.

“But I didn’t want to do that,” he said. “We felt it looked better to have just the one sign rather than two.”

Despite some concerns, the commission voted 3 to 2 to approve the sign variance with chairman Darryail Whittington breaking the tie vote.