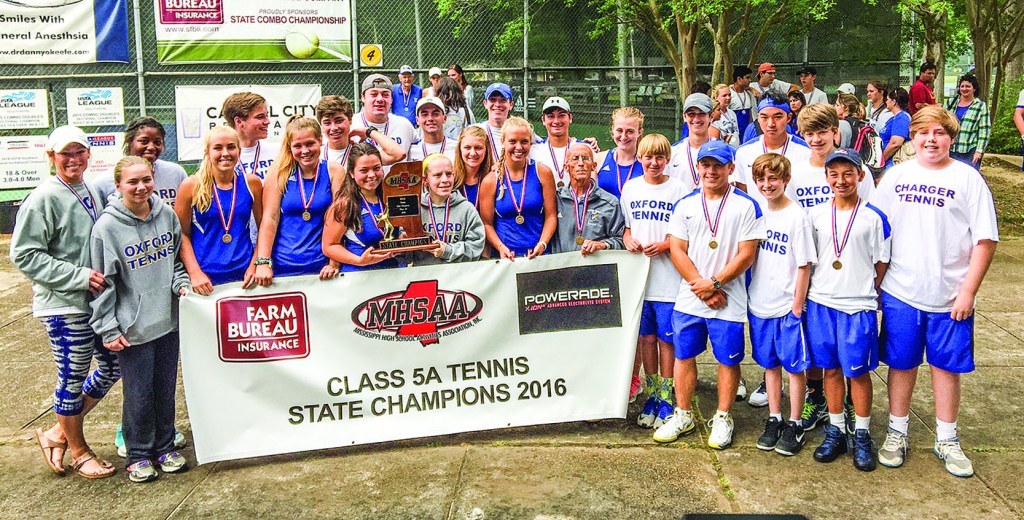 Oxford players and coaches pose with the championship trophy Monday after the Chargers defeated Stone County 7-0 to claim the MHSAA Class 5A team championship at the Parham Bridges Tennis Center in Jackson. The victory gave Oxford its ninth straight state title. (Photo by John Morgan)

JACKSON — There was not much drama for the Oxford tennis team this postseason en route to its ninth straight state championship.

That is how the Chargers are used to doing it.

The Chargers rolled Stone County, 7-0, to claim the MHSAA Class 5A  championship Monday morning at the Parham Bridges Tennis Center in Jackson. It was the fifth consecutive year Oxford has faced and defeated the Tomcats in the finals.

The shutout completed a playoff run where Oxford did not drop a point against any opponent in the postseason.

It did not take long for the Chargers to get to the magic point total of four as the winning point was clinched in 47 minutes after all seven matches began.

“No, it’s pretty cool,” Oxford coach Louis Nash said when asked if racking up state titles has gotten old hat for him.

Both teams were without key players as Stone County did not have its best player, who battled illness on Sunday night. Oxford was without Callan Shinall, who Nash considers one of his best But Nash had prepared a lineup on Wednesday that he felt could deliver another state championship.

“I had thought about changing it (Monday morning), but I had to make sure we had all our injury people covered and all our sick people covered,” Nash said. “We all had to play people that were healthy, and whereas (Stone County) broke down, we may still be OK.”

The doubles matches got the morning started for Oxford with the boys finishing up first. Senior Will Swindoll and Gus Morgan took their match over Stone County’s Reid Cudd and Trey Wegner in straight sets with scores of 6-2, 6-1. Oxford’s other boys doubles team consisting of Ryan Mounce and Max Mauney won its match in straight sets as well, defeating Mateo Escausen and Will Ladner 6-1, 6-1.

For Swindoll and other seniors, it was a bookend of a high school tennis career that saw them win six straight state championships dating back to their seventh-grade year and making them one of the most decorated senior classes in the tennis program.

“We’ve been playing together for a long time, since we were 5 or 6,” Swindoll said. “It’s unique. It’s just one of those things where not many people, I don’t know if anyone, can actually say they’ve won six state titles. It’s really cool.”

The teams of Grace Anne Jones and Amanda Lowery and Sarah Nash and McClellan Davis won their doubles matches in straight sets. Jones and Lowery won theirs in 6-0, 6-0 fashion while Nash and Davis had to mount a comeback in the second set for a 6-1, 6-4 win.

“Today it was really hard to say that anyone was a whole lot better than the others,” Nash said. “They were all pretty good. Of course, Sarah and (Davis) had the most competitive, so that one kind of stands out a little more because it was more competitive.”

The mixed doubles team of Bo Nash and Abbie Vaughn had a 6-0, 6-0 victory while the singles matches were no different. Claire Stevens claimed the girls singles point with a 6-0, 6-3 victory while seventh-grader Gordon Whitwell did not look fazed by the magnitude of his first state championship appearance, defeating Stone County’s Blake Beech 6-0, 6-0 on the boys’ side.