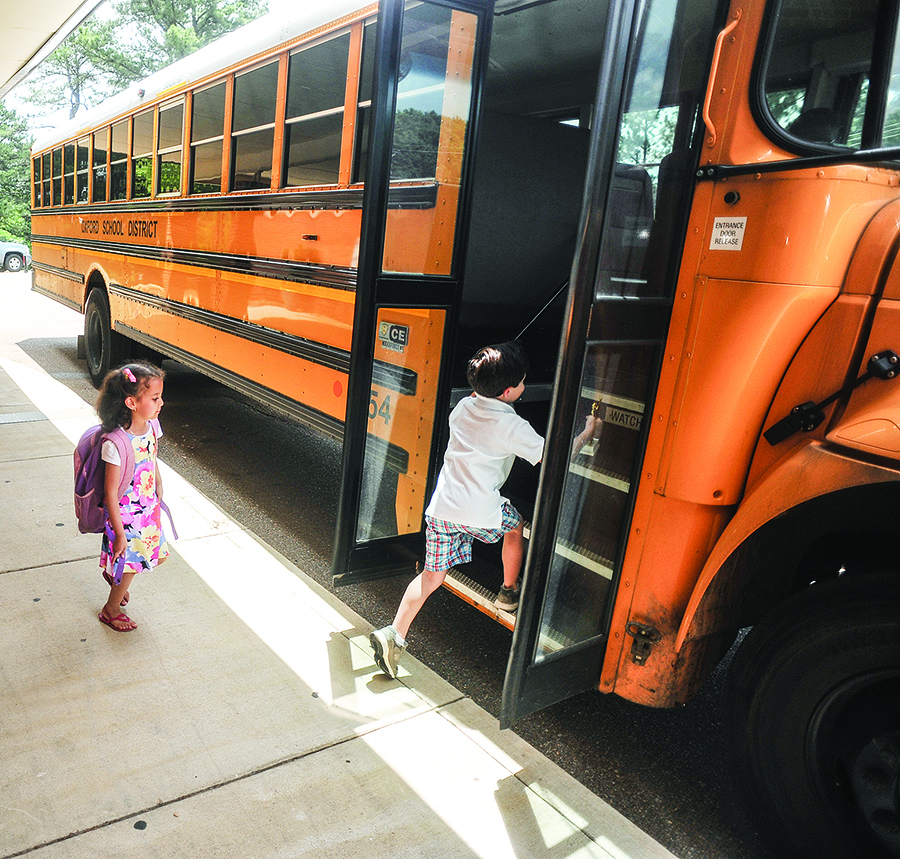 Students board a school bus outside of Bramlett Elementary School.

It’s the time of year for the Oxford School District to begin mulling its budget for the next fiscal year.

While the situation isn’t necessarily ideal or sustainable, School Superintendent Brian Harvey said there shouldn’t be a need for a local tax hike. However, if the legislature doesn’t consider fully funding the school by the Mississippi Adequate Education Program or changing its method of determining funding, there may be problems due to student enrollment growth.

“Our cut was about $71,000 for this fiscal year,” Harvey said regarding state MAEP funding. “We’ve already done some operational things that made up for the difference in that, so we’re not necessarily going to have to cut anything. We believe we have that taken care of.”

Their budget tweaks were in child nutrition and transportation and involved making things more efficient; however, personnel is 80 to 85 percent of the budget, and that might have to be the next to be studied.

While that seems like an increase, due to a larger school population, it’s actually a cut.

“That’s about $500,000 more than what we got last year and looks like an add, not a cut, but the reason it’s a cut is because we have more students,” he said. “Because we had more students last year that impacts our budget this year.”

And for the FY2015 increase, a large chunk of the budget allocation went directly to teachers instead of for system-wide use due to the legislature passing a mandatory teacher pay raise.

How much the district gets funded all starts with average daily attendance multiplied by the base student cost in the MAEP formula. The state looks at enrollment numbers and uses the count of students, other than those self-contained like in special education or other special programs, and bases it on the 63 percent attendance rule. A student must be in the classroom for a certain portion of time during the day to be counted.

For the Oxford School District, that number has equated to missing about 5 percent of the student body, accounting for about 95 percent of average daily membership.

“We had hopes this legislative session that they would change that from average daily attendance to average daily membership,” Harvey said. “The reason that’s important is it doesn’t matter whether they’re here or not. We still have to provide a teacher, a desk, a place in class, textbooks, all of the instructional things.”

Harvey has had his eyes on the state Legislature in hopes for a solution.

“Last year’s legislative session there was a bill that unanimously passed the House and Senate and I’ve been told that the lieutenant governor is the one who did not let it come to the floor for a vote. I was told this year by Sen. Gray Tollison the reason that they wanted to do that is because they knew they wanted to go back into the formula and they wanted it to be done this year. It wasn’t done this year either. All of that impacts the numbers. That’s where we get money.”

That may not be of concern for many districts across the state, because they are losing population or remaining roughly the same. But Oxford is growing.

The school board had a work session Thursday to begin studying the process. Later in June the board will make a determination on what the district needs in order to keep class sizes the way they are now, at about 25 or 26 to 1 in the core classes at the high school.

This year’s eighth grade is the largest they’ve ever had.

“We graduated 200 and will be bringing in over 300,” he said. “It’s just the growth that started 12 years ago in kindergarten. This year’s seniors is the student population that required Della Davidson to be built. As they’ve trickled up and matriculated, Oxford’s continued to grow. That’s why we are where we are with the numbers.”

Harvey is confident that whatever happens, the children will be provided for.

“We have a tax base that supports us and many school districts don’t,” he said.