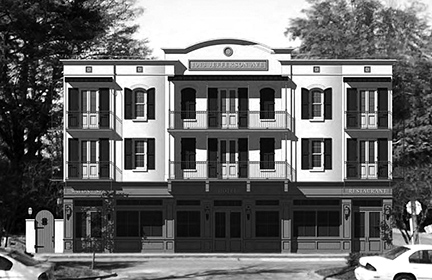 Developers of the proposed boutique hotel, restaurant and spa on Jefferson Avenue have been making the rounds to city commissions to have their plans approved again for the sixth year.

Plans for the three-story boutique hotel were originally approved in 2010; however, Jeff Williams, with Williams Engineering, told the Oxford Historic Preservation Commission Tuesday that owner, Stefano Capomazza, had run into some funding problems but that plans are finally moving forward.

The site plan has been approved by the Oxford Planning Commission. Last month, Williams appeared before the Courthouse Square Historical Preservation Commission seeking renewal on a Certificate of Appropriateness to relocate the La Rousse Salon building to make way for a parking lot for the hotel planned across the street on Jefferson Avenue.

That commission tabled the request, saying it needed more information on the landscaping for the parking lot and details on the type of gate the developer plans on putting on the lot to prohibit non-customers from using the lot.

However, on Tuesday, the HPC granted the request to renew the COA for the hotel itself.

Several buildings in and around the Square fall under both commissions, depending on where they are located.

La Rousse Salon will be relocated inside of the hotel. Williams said the salon is quickly running out of space at its current location.

“They’re anxious to get into the hotel,” he told the HPC commission Tuesday.

The current building will be donated to Habitat for Humanity to be used in Lafayette County.

The proposed hotel will have the spa and a restaurant on the bottom floor. Capomazza is the owner of Boure’ on the Square. The hotel rooms will be located on the top two floors and have long French doors and balconies on several of the rooms.

“Our architect came to Oxford and spent a lot of time looking around the Square and nearby neighborhoods to design something that fits into the character of both,” Williams said.