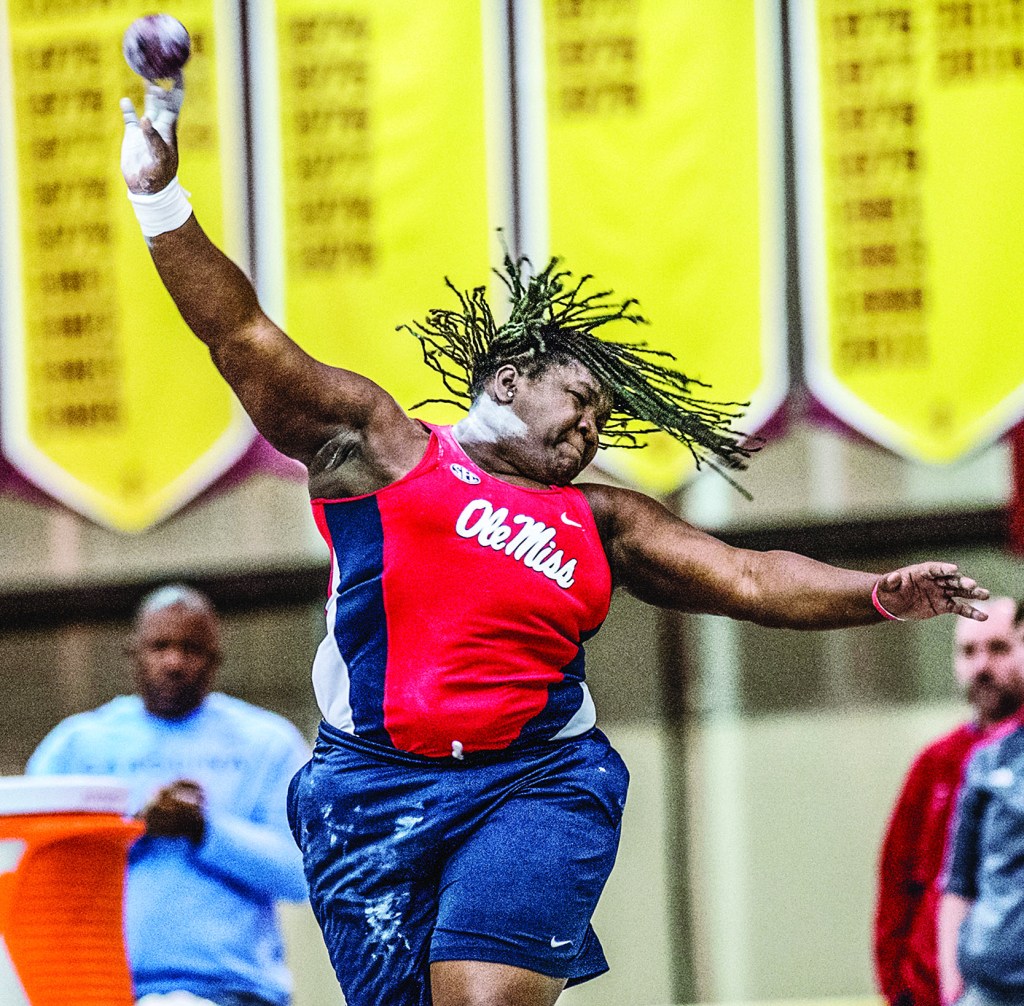 Already a collegiate record holder and a two-time NCAA shot put champion as a sophomore, Ole Miss’ Raven Saunders will go for this year’s Southeastern Conference and NCAA outdoor championships before participating in the Olympic Trials this summer. (Photo by Luke Lu)

She remembers it vividly, a recollection that best explains a level of strength that’s difficult even for herself to comprehend.

Competing in the Iowa State Classic back in February, Raven Saunders, Ole Miss’ women’s shot putter, rotated twice and threw for the fifth time, but this throw wasn’t like the others. The heavy ball came out of her hand funny, costing her a chance, she thought, at her latest and greatest achievement.

“I completely missed the throw, and I was like, ‘Oh my gosh,’” Saunders recently recalled.

But everything Saunders touches nowadays seems to turn into a record.

Saunders’ throw went 19.23 meters, a distance she couldn’t bring herself to believe until meet officials officially measured. Once confirmed, Saunders had the farthest throw ever by a female collegiate shot putter, breaking the record set by former Oklahoma standout Tia Brooks in the 2013 NCAA Indoor Championships by a centimeter.

“Once they got the tape out, it was like, ‘What’s going on?’” Saunders said. “It came as a complete shock.”

It’s hard to be surprised by anything Saunders does in the circle anymore.

She’s accomplished all of it before her 20th birthday.

“She has done amazingly in a short amount of time,” Ole Miss coach Connie Price-Smith said.

Fresh off a winning throw of 18.33 at the Memphis Invitational late last month, the sophomore is eyeing a strong finish to her first year at Ole Miss with the SEC Outdoor Championships starting Thursday in Tuscaloosa, Alabama, followed by the NCAA preliminaries and the NCAA Outdoor Championships, where she hopes to repeat after failing to win the indoor title in February when a pair of fouls kept her from advancing to the finals.

After that, Saunders will take part in the Olympic Trials to compete for a spot on this year’s U.S. Olympic Team headed to Rio de Janeiro, Brazil in August.

“After indoors and my performance there, I’m really not even close to satisfied,” Saunders said. “It’s about going out there and not leaving anything on the table at all. I have the Olympic Trials coming up, so I really have to push myself to a higher level at these meets.”

Following the leader
Saunders won the national indoor and outdoor titles as a freshman at Southern Illinois but transferred after last season in order to continue being coached by Price-Smith, a four-time Olympic thrower who spent 14 years at SIU before being hired by Ole Miss last summer. The moves continued a coach-thrower relationship that almost never existed.

A native of Charleston, South Carolina, Saunders’ accolades began at Burke High School, where she excelled despite being involved in nearly everything but the shot put before her freshman year.
“Basketball, volleyball,” Saunders said. “Wanted to try out for the football team, but my mom wouldn’t let me.”

She became a four-time state champion at Burke, and by switching from the glide (gliding across the circle) to the spin (two full rotations in the circle) technique, she made enough progress to set all-time national indoor and outdoor high school records. Price-Smith and her husband, assistant coach John Smith, assumed Saunders’ marks were too good for the mid-major level until they got word that Saunders wanted the Smiths as much as the Smiths wanted her.

“I had gotten an email from a friend that said, ‘Hey, can you call Raven because she really, really wants to come to Southern,’” Price-Smith said. “John will tell you, too, that usually athletes at her level are not going to come to the mid-major. They’re wanting to go to the big time. So I said, ‘John, you really, really need to call Raven.’ He called her, she came out on a visit and she actually committed before she even came on a visit.”

Saunders could skip out on her final two seasons of amateurism and get a head start on pursuing a professional career, but that’s not the plan. Saunders said the expectation is to add some more championships to an already sparkling college resume before graduating from Ole Miss.

“I always envision winning no matter which stage I’m on,” Saunders said. “As long as I’m working toward it, I know anything is possible.”

After that, who knows?