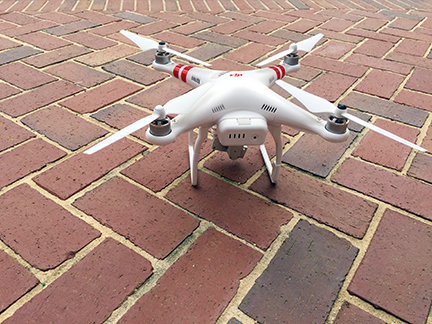 Your son is starting in his first Oxford Charger football game and you’re excited to film the whole game with a drone given to you recently as a gift.

However, you may just have to put it back in the box.

The Oxford School District is considering a new policy that would forbid anyone from flying a drone or any remote-controlled aircraft in the skies over any of its school campuses or school properties, including the football stadium and athletic fields, without prior authorization from the Federal Aviation Administration.

The school board members reviewed the proposed policy during its April board meeting. It was the first reading of the policy and will come back up for discussion and a vote at the board’s May 23 meeting.

Superintendent Brian Harvey said the policy was written up because of safety concerns.

“It’s not something we’ve had an issue with yet,” he said at the meeting. “But there’s been a lot of instances where drones fly above stadiums, causing a good many problems, and some have crashed.”

The FAA requires all drones to be registered and licensed. Penalties for flying a drone without the license can be up to $27,500.

“I felt it wise for us to have a policy in place,” Harvey said.

Board member Gray Edmondson suggested against an all-out prohibition.

“We might at one time want to hire someone to film something,” he said. “Could we add ‘without the consent of the school district?’”

Other board members agreed. “We don’t want to tie our hands,” said board member Ray Hill. The policy also states that anyone in violation, will be reported to the FAA and could be subject to being removed from school property. Students who violate the policy would be “dealt with according to the district’s student code of conduct.” Any school district employee found in violation will be “subject to formal disciplinary action.”