TAKING THE LEAD: Oxford walks off with win in extras in North Half opener 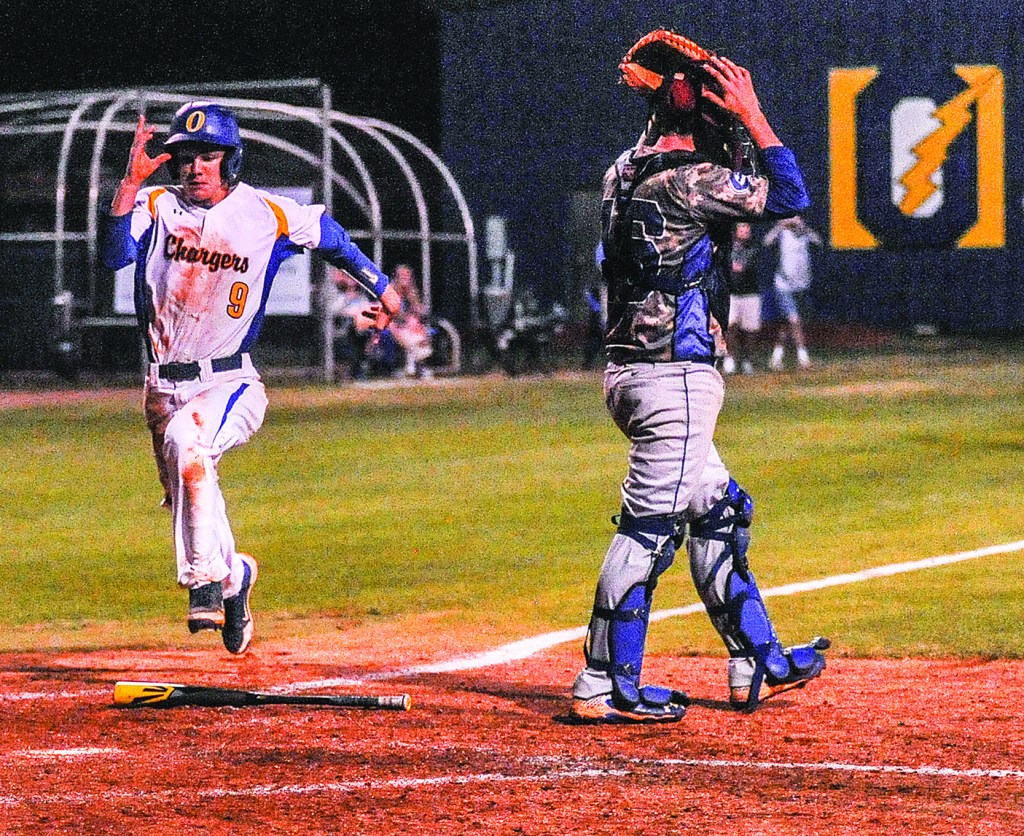 The way he was pitching, Jason Barber would’ve been OK with taking the mound for one more inning. The way Barber’s offense was hitting, his coach was hoping he didn’t have to.

Oxford walked off with a 2-1 win in extra innings against Grenada in Game 1 of the MHSAA Class 5A North Half finals Wednesday at Edwin Moak Field, putting the Chargers a win away from having their chance to defend their state championship. Barber went the distance for the win in what could’ve been the final home outing of his prep career, and Oxford mustered just enough offense thanks to some good fortune to take the early lead in the best-of-three series.

“I decided to tuck my head under a towel, and I was just hoping for the best,” Barber said of his team’s final at-bat.

Houston Roth reached to start the home half of the eighth for Oxford (25-8) on Trey Spencer’s error and moved to second when Spencer’s attempt to throw him out at second on Preston Perkins’ sacrifice bunt was late. Tag Gatlin stepped in two batters later and hit a grounder to second baseman Logan Pitcock, but Pitcock’s throw to second was wide of a covering Bailey Albritton, allowing pinch runner Giles Lamar to score the winning run from second once the ball bounced far enough off Albritton’s glove.

“I was waving him in harder than (assistant coach) Chase (Goolsby) was waving him over there at third base,” Oxford coach Chris Baughman said afterward.

It ended what quickly turned into a pitcher’s duel between Barber, who’s headed to Ole Miss, and Grenada’s Caleb Morgan, a Hinds Community College signee, despite both fighting their command as the game wore on.

Morgan allowed just three hits in seven innings before giving way to Dane Bevell after throwing 127 pitches but faced the minimum in just two of them. He struck out 10 and walked seven, but it was an error in the fourth that helped Oxford break through against the right-hander. After Devarious Wilborn dropped Gatlin’s drive to center, Duncan Graeber drove pinch runner Blake Parham home with a single to give the Chargers the 1-0 lead.

“That’s our game,” Baughman said. “When we can get those guys up in their pitch count and out of the game, our guys are pretty good at being efficient with what they do. That proved to be huge for us.”

Grenada (25-4) put 10 runners on in the first seven frames against Barber, who surrendered five hits, walked one and hit three batters. He missed his spot with a fastball in the fifth to Spencer, who deposited it over the left-field fence to draw Grenada even.

But Barber later thwarted threats by the visitors, inducing an inning-ending groundout from Wilborn with runners on first and second in the sixth before getting back-to-back strikeouts in the seventh to strand a runner at second. Barber, who improved to 9-2, finished with 10 punchouts.

“I knew I had to come back and just go at the next batters,” Barber said. “I couldn’t be punched in the face and fall down. I had to punch back. I just tried to get back out there and fill up the zone again. … My command wasn’t there against a few batters, but when I really needed it, I beared down and found it a little bit.”

Said Baughman, “He can go out there without his best stuff and win and shut somebody down. If that’s the last time he pitches on this field, it’s a great way to go out.”