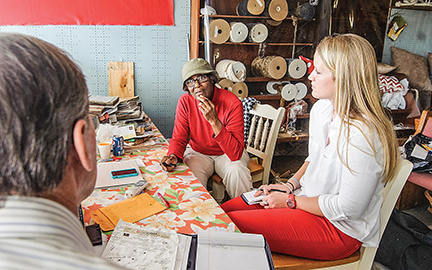 For the third time in seven years, the Meek School of Journalism and New Media at the University of Mississippi has won an annual Robert F. Kennedy Human Rights Journalism Award.

UM’s depth reporting class won in the college category for “Land of Broken Promises.” The exposé examines the impact of the Voting Rights Act of 1965 in the Mississippi Delta 50 years later.

“Winning the Kennedy Award for college journalism is a testament to the quality of teaching by Mikki Harris, Bill Rose and Darren Sanefski,” said Will Norton Jr., professor and dean of the journalism school. “These three individuals have demonstrated repeatedly that they are uncommonly effective, student-oriented teachers. We are grateful to have professionals of their caliber on our faculty in the Meek School.”

Twenty-seven students spent spring break 2014 conducting interviews and photographing images for the 132-page, four-color magazine. It was published and distributed in January 2015.

“This was a wonderful and unique opportunity for our journalism students to work as multimedia journalists in a very diverse setting,” Rose said. “It’s one of the things I love about working here. Students who are driven to be the best can get opportunities here they won’t get at other journalism schools.”