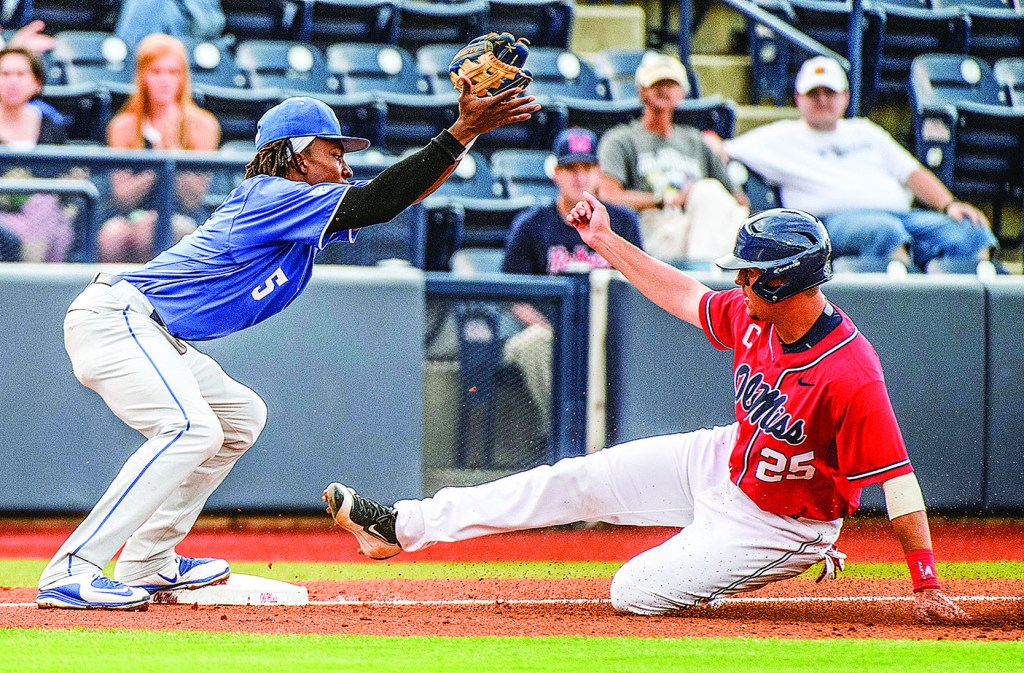 There is a lot riding on the final two weeks of the regular season, and Ole Miss needed to start things off on the right foot.

A quality start by Brady Bramlett and key runs by the offense helped the No. 6 Rebels take the series opener, 3-1, over Kentucky on Thursday night at Oxford-University Stadium. Ole Miss will go for its third straight series win tonight at 6:30.

Runs were at a premium on both sides with Bramlett and Kentucky starting pitcher Zack Brown allowing only three runs combined.

Ole Miss (37-13, 15-10 Southeastern Conference) got on the board first with a run in the home half of the second off of an RBI single by designated hitter Holt Perdzock to score catcher Henri Lartigue for the early 1-0 lead.

Kentucky (29-21, 13-12) answered right back in the top of the third with a solo home run by center fielder Tristan Pompey to knot things back at one run apiece.

It was the only offense Kentucky could muster as Bramlett had one of his better outings in recent weeks. The redshirt junior went 5 1/3 innings, giving up only one run on seven hits while striking out seven and walking two Kentucky batters to earn his seventh win of the season.

“It’s no mystery that my last few starts have been a struggle for me,” Bramlett said. “So it just felt good tonight to feel like myself again and pitch like myself again. The mentality for myself tonight was just to obviously give my team a chance to win and just get back to being me.”

Ole Miss pulled ahead in the fourth inning when left fielder Cameron Dishon hit an RBI single to score first baseman Will Golsan. Golsan got into scoring position after hitting a one-out triple.

“It was a curveball up, and I was just trying to keep my swing short,” Golsan said. “When (Pompey) dove for it, I figured I could get to (third base), so I just tried my best.”

Third baseman Colby Bortles provided an insurance run for Ole Miss in the seventh, scoring second baseman Tate Blackman with an RBI single up the middle for the winning margin.
Four Rebels had multi-hit games with shortstop Errol Robinson going 2-for-5.

Kentucky had its chances to make the game more interesting or put the Rebels in a hole, but Bramlett and the Ole Miss bullpen did their job, holding the Wildcats to 1-for-15 with runners on base and 0-for-11 with runners in scoring position.

Brady Feigl, Will Stokes and Wyatt Short combined for 3 2/3 innings of shutout relief work with Short earning his 10th save of the season.

Game-changing call
With two runners in scoring position, Kentucky looked to have taken a 3-2 lead in the sixth inning when catcher Troy Squires struck out but Lartigue could not hold on to the ball.

With Squires running down to first, Lartigue rushed the throw, which bounced off both Squires and Golsan, sending it into shallow right field. Home plate umpire Randolph Harvey called Squires out due to interference, ending the inning and eliminating the two runs that scored during the play.

TAKING THE LEAD: Oxford walks off with win in…