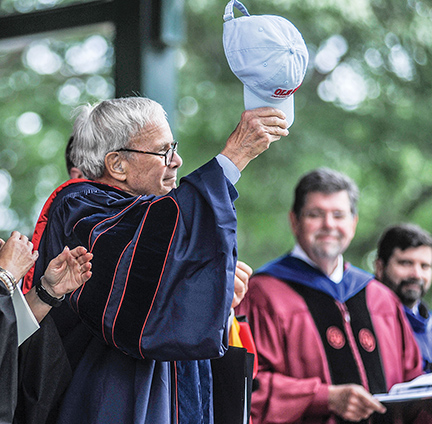 Bruce Newman Tom Brokaw tips his cap to the crowd following his address at the University of Mississippi commencement ceremony in the Grove on Saturday. 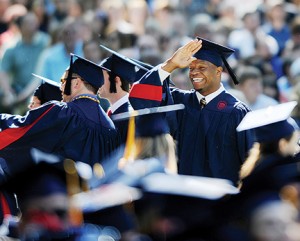 Bruce Newman
Terry Caldwell gives the “fins up,” a signal used by the Ole Miss football team and its fans, during the University of Mississippi commencement ceremony in the Grove on Saturday.

Respected journalist Tom Brokaw warned the University of Mississippi’s graduates that they’re living in an age of violence and social media noise and he challenged them to cherish “real” experiences and help make their world a better place.

He reminded the 4,000-plus graduates that though social media is a big part of their lives, many experiences transcend anything that comes from inside an iPhone. Those are the moments that should be cherished the most.

“No text will ever replace the first kiss,” Brokaw said. “No email will ever compete with the spoken phrase, ‘I love you. I want to spend the rest of my life with you.’ No selfie can ever take the place of holding a first child moments after birth. Life will always be most rewarding when real, not virtual, emotions are involved.”

Ole Miss is where a lot of the important nondigital experiences Brokaw referred to have occurred for Saturday’s graduates. For many, the friendships and memories made in college will be cherished for the rest of their lives.

Not much in life compares to being beneath Grove’s oaks on a Saturday in the fall, Brokaw said.

“For the rest of your life, Ole Miss will be a prominent part of your formative years,” Brokaw said. “You’ll go to great parties and you’ll think, ‘Not bad, but it’s not the Grove.’”

Brokaw is very familiar with the university, which he calls a “special place” in the state. He served as a guest lecturer in UM’s Meek School of Journalism and New Media in 2010 and discussed presidential politics in a campus program before the first 2008 presidential debate between then-U.S. Sen. Barack Obama and U.S. Sen. John McCain, which was held in the Gertrude C. Ford Center for the Performing Arts.

Brokaw has also visited campus several times over the last decade, often attending football and baseball games. He was here for the football victory over Alabama in 2014, which he enjoyed. A verbal jab directed toward the University of Alabama drew laughter from the Commencement crowd.

“I’m so relieved to be speaking to a graduating class from Ole Miss,” Brokaw said. “If I were speaking at Alabama, I would have to use smaller words and shorter sentences.”

Brokaw, who holds a political science degree from the University of South Dakota, has enjoyed a long and distinguished career, including covering the Watergate scandal of the early 1970s that led to President Richard Nixon’s resignation. He also served as host of the “Today” show from 1976 to 1982, when he became an anchor of “NBC Nightly News.”

Since retiring as anchor in 2004, he’s kept busy with journalism projects. He worked on documentaries for the Discovery Channel, the History Channel and Fox Sports Net and also moderated the second McCain-Obama presidential debate at Belmont University in 2008.

He is also author of “The Greatest Generation,” which is about those Americans who grew up during the Great Depression, went on to fight World War II, won and came home to transform their country.

As a young journalist, he witnessed the many struggles of people of color to find equality in the United States. He sees great progress at the university, which was the scene of deadly riots over James Meredith’s enrollment as the first black student in 1962.

“As a reporter in the South in those days, I must tell you I could never have imagined I’d be here one day with the affection I have for Ole Miss and speaking to a student body that is ever more diverse, or that I would walk into the chancellor’s box during a football game and find James Meredith as the guest of honor, or that the president of the Ole Miss Alumni Association would be an African-American mother of a student here who also happened to be an executive at FedEx,” Brokaw said.

“These are important, historic steps forward in Mississippi but in most of the country, in every state and in every institution, the issue of race, reconciliation, resolution – these are the unfinished businesses of our time. It’s not confined just to states in the great South, but it’s across state lines, from sea to shining sea in our nation.”

Continuing to address these issues is critical, he said.

“The dream of equality for all is not an obligation of one race or another,” Brokaw said. “It is a common calling in our unique society. We are still a nation of immigrants, where the rule of law is inadequate if the rule of the heart is not on also an equal part. All shades of the American palette matter.”

The graduates live in a country where mass shootings in schools and other public places, police-involved killings, terrorism and racially motivated violence are common. Brokaw said he owns “a closet full of guns” and is an active sport shooter, but he supports more stringent gun control laws to help lessen the violence.

He said no one will take his guns away, but he’s “appalled” by an ongoing movement to arm more people with even more lethal weapons without considering the consequences.

“More guns and more firearm tolerance will mean more homegrown acts of terror,” Brokaw said. “Yes, you have a constitutional right to own guns. I believe strongly in the Second Amendment, but with that right comes the personal obligation to be on guard against the promiscuous use of guns, not to pretend no limits means no trouble.”

He called graduates to use their skills to address the state and nation’s problems. Noting that social media wields great influence over communication, social, scientific, academic, commerce, political and research endeavors, Brokaw urged graduates take what they’ve learned at Ole Miss and dedicate part of their life to working for increasing tolerance, education, economic opportunity, social acceptance for all Mississippians.

“Take as much pride in where Mississippi ranks on those metrics as it does on the national football standings,” he said.

UM Chancellor Jeffrey S. Vitter, presiding over his first Commencement at the university, took a panoramic photo of the Grove full of graduates to post on his Twitter account. He wished them luck.

“Today, you complete your work as students at the university when you graduate,” Vitter said. “You also begin the next chapter of your life at Commencement. Our collective prayer for you is a life filled with joy, good health, successful, meaningful careers and peace. God bless each of you.”

Edward C. Maloney, president of the UM Alumni Association, paraphrased the biblical parable of the talents from Matthew 25:14-30 to charge graduates to live up to their potential.

Mary Katherine Berger, president of the senior class, said that during their time here, classmates have had to be Rebels by making tough decisions and standing up for what they believe is right.

“As we leave the spot that ever calls, I charge each of you with the task of remaining a Rebel in your everyday life,” Berger said. “To take a stand for what you believe in, to always uphold the Creed, to go against the status quo and to always shout ‘Hotty Toddy’ at the random person you see in the street wearing an Ole Miss T-shirt wherever life may take you.”