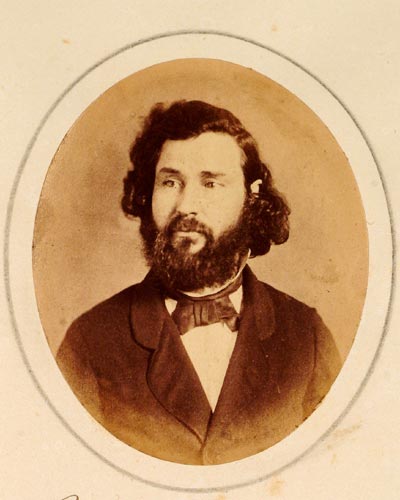 There are three men, two professors and a former chancellor, who — each in their own way — may have saved the buildings, scientific apparatus and other property and equipment of the University of Mississippi from the Yankee’s torches.

Through the efforts of Professor Eugene W. Hillgard, Professor Alexander James Quinche and former Chancellor F.A.P. Barnard, our university was saved when the city of Oxford business district (34 buildings including the Lafayette County Courthouse) and five private homes were burned in August 1864.

This week I want to give you some historical information on one of these men, Latin and Modern Language Professor A.J. Quinche. In later weeks I will give you the stories of the other two men’s efforts to save Ole Miss, but this week’s topic will be about the family connections with a Union general and a college professor’s life in Oxford and tragic death in 1889.

Quinche was born in Fort Snelling, Minnesota, on Jan. 17, 1827. His family moved to Galena, Illinois, while he was a young boy and this is where the future college professor would meet and be befriended by a veteran of the Mexican War. Ulysses S. Grant was in a down time of his life when he was forced to work selling harnesses in the family’s business in Galena. There was no place for the West Point graduate in the Army of the Republic, so he was relegated to being a shopkeeper.

Quinche left Galena to receive his education at the University of the City of New York and a doctorate in law. and would later teach at Columbia University. In 1859 he was appointed to the faculty of the University of Mississippi as professor of Latin and Modern Languages.

He would remain with the university as a professor until 1889. When he came to Oxford in 1859, L.Q.C. Lamar would be appointed to the faculty for the second time the next year and these two men would become lifelong friends.

It was not long until the storm clouds of war came to the university and Oxford. In late 1861, the campus was closed and Quinche, along with former student and now professor Burton Harrison, were appointed by the University Trustees to be custodians of the university property and to teach any classes for students that may need assistance. Hillgard was the third former professor to be appointed as custodian. He was there to safeguard the geological equipment the college had obtained.

Burton Harrison, his mother and sister, along with the Hillgard and Quinche families made their home in the Observatory. Harrison would later leave after one year to go to Richmond and become the private secretary of the President of the Confederate States of America, Jefferson Davis.

He would obtain the rank of colonel and be captured at the end of the war with President Davis and be imprisoned as a traitor.

As the legend goes, when Grant was making his first attempt to capture Vicksburg, he made his headquarters in the home of Col. James Brown on Depot Street (now Jackson Avenue) on Dec. 2, 1862. Quinche would meet with his former family friend at his headquarters to prevail upon him to place guards in the campus buildings. A group of horse soldiers, the Kansas Jayhawkers, had already been on campus and had ransacked the observatory looking for whiskey.

Quinche, as custodian of the university, did not want the marauding Yankees to set the campus a blaze as they had done in other towns in the South. Grant issued a protection order for the buildings and did as his family friend had requested, placing guards on the buildings while his troops were encamped in Oxford.

After the war, Quinche would resume his duties as a professor of Latin and Modern Languages. In 1871, the Board of Trustees of the university began to make efforts to bring the university curriculum more in line with the trends at other colleges. The professors of the old school methods, such as Quinche, taught in a method known as “closed curriculum” with an emphasis on the classics. These professors of the old school believed in recitation and strict discipline. They were more interested in instilling piety than learning in their students.

The trustees and the new chancellor, Edward Mayes, wanted to give the students more of a choice in their studies. By 1889, only three of the old professors had been retained by the University Trustees. The board had dismissed the others, including Quinche.

The man, who had helped save the new state university at Oxford from the torch and certain destruction, was dismissed with $500 in severance pay. This was July 1889.

On Aug. 18, 1889, the despondent professor went into his backyard and shot himself. The man who had devoted his life to the university for almost 30 years had taken his own life. The apparent suicide of Quinche touched off a controversy around the state regarding the treatment of former professors.