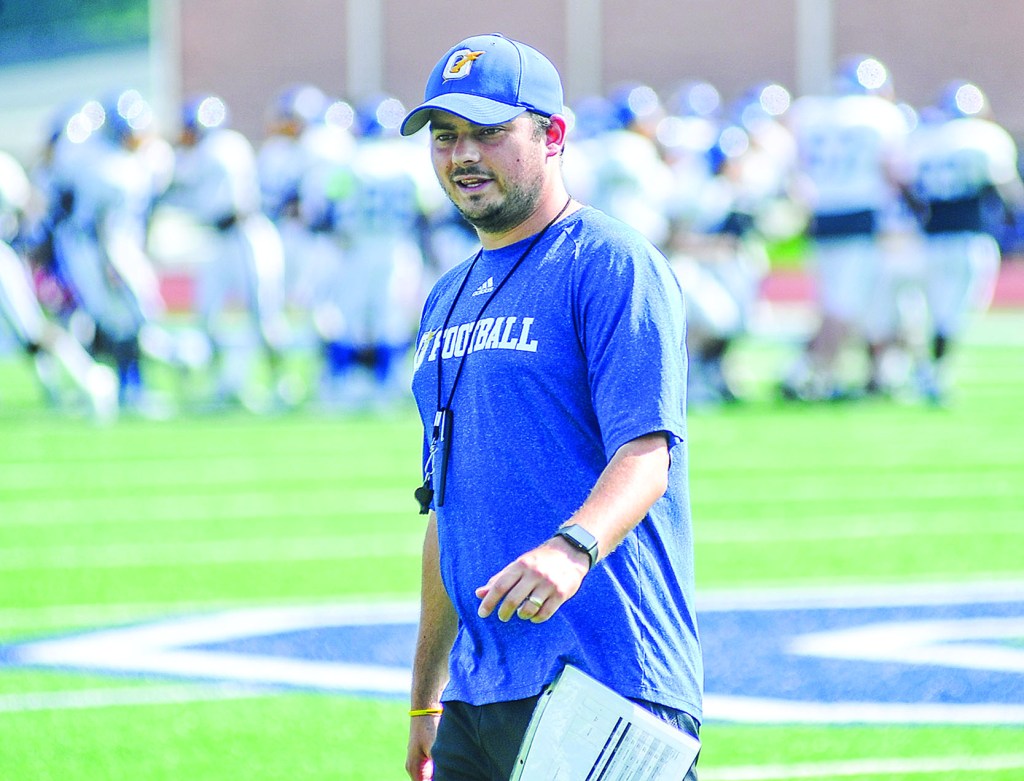 Six months ago, Chris Cutcliffe would’ve been doing good just to pull up his calendar on his cell phone.

Now working it is a necessity.

It’s just one example of the adjustment Oxford’s first-year football coach is making as he continues to transition from an assistant to being the leader of his own program for the first time. Cutcliffe didn’t have to keep up with nearly as much the last five seasons as the Chargers’ wide receivers coach, but that all changed once he was promoted in January to take over as head coach for Johnny Hill, who retired.

“I’ve never used the calendar in my phone until January, and now I use it regularly to schedule things,” Cutcliffe said. “Just keeping to-do lists. It’s pretty much on my phone, just trying to keep everything in line. I check it every morning and make sure I have everything I’m supposed to do that day ready to go and have it all accounted for.

“Everybody always says you’ll be amazed at how much time you spend on everything but football, all the administrative things. I would always be like, ‘Yeah, I’m sure.’ But that is the truth.”

Most of Cutcliffe’s time the last three weeks were spent on the practice field leading his team through spring drills for the first time. The Chargers wrapped up their spring with a 21-0 jamboree win over Rosa Fort on Saturday.

The son of former Ole Miss coach and Duke coach David Cutcliffe, the younger Cutcliffe is tasked with finding new contributors for a team that’s lost a significant amount of talent after playing in three straight MHSAA Class 5A championship games.

The skill positions were hit hard by graduation as quarterback Jack Abraham (Louisiana Tech), wide receiver D.K. Metcalf (Ole Miss) and tight end Zach Cousar (Louisiana Tech) have taken their games to the next level. Ken Presley, who caught more than 1,000 yards of passes a season ago, and Jimmy Greaser (994 receiving yards) are also gone.

Cutcliffe said he liked what he saw this spring from some of the Chargers’ young pass-catchers, notably Barry Flowers, Drew Robinson, Dede Pegues and Joe O’Keefe, who’s in line to take over for Cousar at tight end. Preston Perkins and Jaquan Webb will also compete for spots in the rotation out wide.

“We have to step up,” Cutcliffe said of his receivers. “Those guys that graduated set a standard for how we go about our business at practice, how we go about our business in the weight room, and we need that to continue. We’ve talked to those guys a lot about picking up where Jack, D.K., Ken, Jimmy Greaser, Zach Cousar and all those guys, pick up where they left off and continue that.”

Finding a successor
As for who will succeed the record-setting Abraham, Cutcliffe is still evaluating his top two options and plans to do so through the summer. Rising sophomore John Reese McClure and Zac Montgomery, a transfer from Harding Academy who has two years of eligibility left, split reps evenly this spring as they compete for the starting job.

Cutcliffe said he will let the competition play out as long as necessary to nail down his guy.

“I want to give them every opportunity to win it,” Cutcliffe said. “When one of them steps up to win the job and take the job, I think it will be evident.”

The Chargers return a handful of starters on defense with Cutcliffe praising rising senior linebacker D.T. Thompson and defensive lineman Nick Sisk for their springs as they prepare to step into leadership roles. With the entire roster getting its first feel of what its new coach expects, Cutcliffe said the transition early on has been a success for everyone involved.

“I think the focus was replacing not those guys as players but replacing them as leaders and replacing their personalities and going about our business in practice the right way with a lot of energy and just a lot of hard work and focus,” he said. “I think we’ve done a pretty good job of that.”