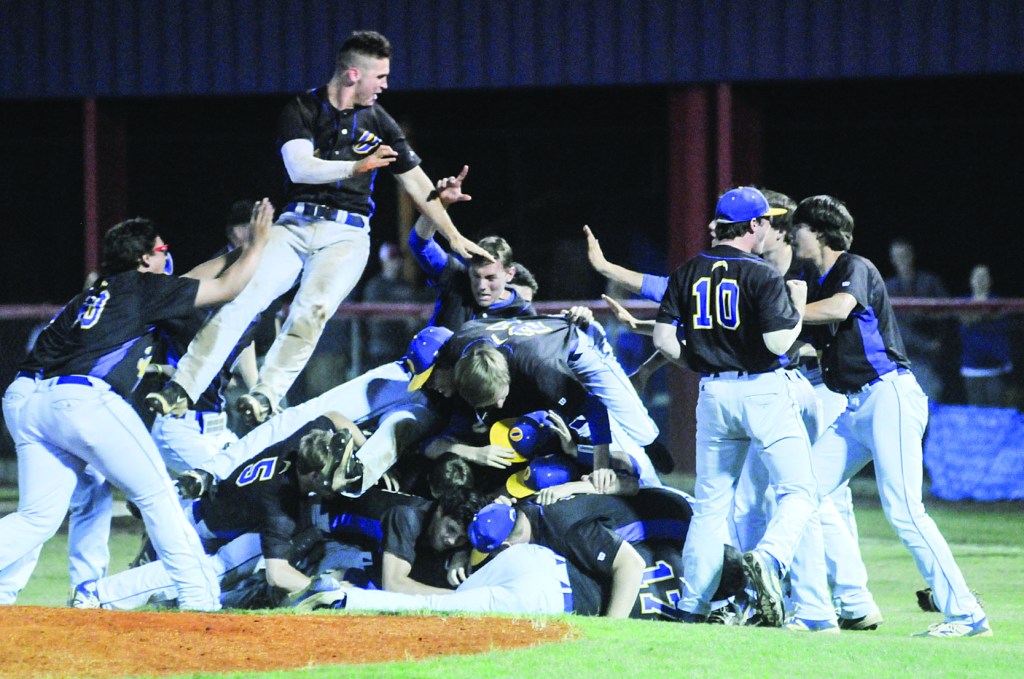 Oxford players celebrate their second straight MHSAA Class 5A North Half championship Friday at Charger Field in Grenada. Oxford will try for back-to-back state titles for the first time in school history starting tonight against Hattiesburg in the championship series. (Photo by Davis Potter)

The only surprise would be if Oxford was not back here again.

The nationally ranked Chargers, the defending MHSAA Class 5A champions with five Southeastern Conference signees or commitments on the roster, once again went through their division unbeaten and have won six of their seven playoffs games to claim another North Half championship and earn the chance to defend their title in this year’s championship series against Hattiesburg starting tonight at Trustmark Park in Pearl.

It’s a moment Oxford has been eagerly awaiting since the preseason.

“That’s been our end goal since day one of practice,” senior outfielder Sage Mullins said. “We just took it one step at a time. Now we’ve reached our goal. Now we’ve just got to finish it off.”

Tonight’s opener will start at 7 with Game 2 of the best-of-three series slated for Thursday at 4 p.m., weather permitting. The MHSAA has altered part of the championship schedule with storms expected in the area throughout the week, meaning a third game could be played Saturday or Sunday if needed.

Led by Ole Miss signees Grae Kessinger, Jason Barber, Houston Roth and Thomas Dillard, Oxford (26-8) is playing for a state title for just the fourth time in school history — the Chargers also won it all in 2005 — and for the first time in back-to-back years. Rain or shine, day or night, this group of Chargers wants to be the one to make more history.

“We talked about all the hype preseason and national this and that,” Oxford coach Chris Baughman said. “We set some goals that would’ve been nice, but we said when we set out at the beginning of the year that our No. 1 goal is to win another state championship. … I’m just glad these kids have the opportunity to get back down there and try to repeat.”
Said Mullins, “We want to win it because it was like, what, 10 years between the last one? It’s huge.”

Coming in hot
Hattiesburg (26-7) comes into the series having swept all three of its playoff opponents, including Pearl River Central in the South Half finals, while Oxford has won five in a row and seven of its last nine. The Chargers have yet to lose to a team in their classification.

Oxford will likely throw its top arms at Hattiesburg in the first two games in Roth (0.48 earned run average) and Barber (1.08), who are a combined 18-2 with 13 complete games between them. Hattiesburg is led offensively by sophomore shortstop Joe Gray, who’s hitting at a .474 clip with seven home runs and 45 RBIs.

The Chargers have five regulars hitting at least .300 with Dillard’s .419 average leading the way. The senior catcher has also belted a school-record 14 home runs and driven in 46 runs, though Oxford hasn’t had to rely as much on its thumpers in the middle of the order as of late.

The Chargers have outscored their opponents 53-15 in the postseason despite going deep in just two of those games, a confidence boost for the rest of the lineup as it prepares to face sophomore right-hander Dexter Jordan (9-1, 1.98 ERA) and the rest of Hattiesburg’s staff. Jordan allowed just one run on five hits in a complete-game win against Pearl River Central in the series opener his last time out.

“We’re swinging the bats well as a team and really coming through with some big hits with guys in scoring position and driving them in,” Mullins said.

Oxford wasn’t overwhelmed last year by everything that came with playing on the state’s biggest stage in front of hundreds of spectators in an unfamiliar venue, outscoring George County, a 6A finals participant this year, 13-0 in a sweep. The Chargers will leave any nerves to Hattiesburg.

“It’s a big stadium, a minor-league park, and only the top two teams in each class get to play there,” Roth said. “We’ve been there before, we’ve seen it all, we’ve had the fans there, and I think that will be an advantage for us.”

Whatever helps in the Chargers’ bid for another piece of history.

“For us going back-to-back years, it’s surreal. It’s just awesome,” Roth said. “And this group of guys, we play together well. Everybody’s getting hot, and I think it’s going to turn out good.”